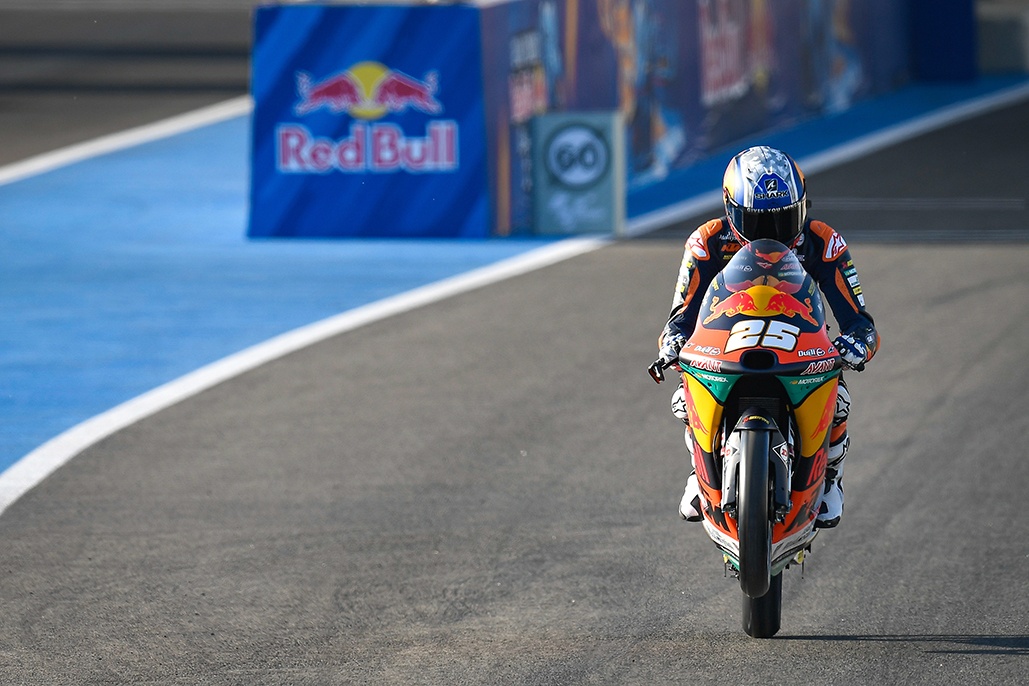 The Red Bull KTM Ajo rider ends Day 1 in Andalucia ahead of Suzuki and Salač.

Raul Fernandez (Red Bull KTM Ajo) topped the timesheets on Day 1 of the Gran Premio Red Bull de Andalucia, putting in a 1:45.896 in FP1 and remaining the only rider to dip into the 1:45s by the end of play. Last weekend’s polesitter Tatsuki Suzuki (SIC58 Squadra Corse) was second fastest, with Filip Salač (Rivacold Snipers Team) within a tenth of the Japanese rider to complete the top three. The combined timesheets were so tight on Day 1, only five of the gaps splitting the 31-strong grid were over a tenth of a second…

It was another baking hot Friday under the Andalucian sun, and the majority of the combined timesheets once again featured a majority of laptimes set in the slightly cooler conditions of FP1. The afternoon instead saw John McPhee (Petronas Sprinta Racing) in charge for much of FP2, with the Scotsman seven tenths clear, then three, and then finally just 0.045 ahead after a late dash from Andrea Migno (Sky Racing Team VR46) and Championship leader Albert Arenas (Solunion Aspar Team Moto3), who also got within a tenth of the Brit.

Overall though it’s Fernandez, Suzuki and Salač in charge from their FP1 times, with last week’s Friday showstopper, Gabriel Rodrigo (Kömmerling Gresini Moto3), slotting into fourth. Migno completed the top five as the Italian was once again up at the sharp end in Jerez.

Next up on the Friday timesheets it was a battle for supremacy between the Red Bull MotoGP Rookies Cup and the FIM CEV Repsol, with 2019 Rookies Cup winner Carlos Tatay (Reale Avintia Moto3) taking the spoils in P6 to edge out reigning FIM Moto3™ Junior World Champion Jeremy Alcoba (Kömmerling Gresini Moto3). They finished the day just ahead of Spanish GP podium finisher Tony Arbolino (Rivacold Snipers Team) and FP2’s fastest man McPhee, who were eighth and ninth respectively. Stefano Nepa (Solunion Aspar Team Moto3) completed the top ten after a solid showing.

Maximilian Kofler (CIP Green Power) was the only other rider to take a tumble on Friday, although teammate Darryn Binder had a small skirmish and run off. The South African will be another looking for improvements in FP3 after mounting an amazing comeback through the field before a crash in the Spanish GP last weekend.