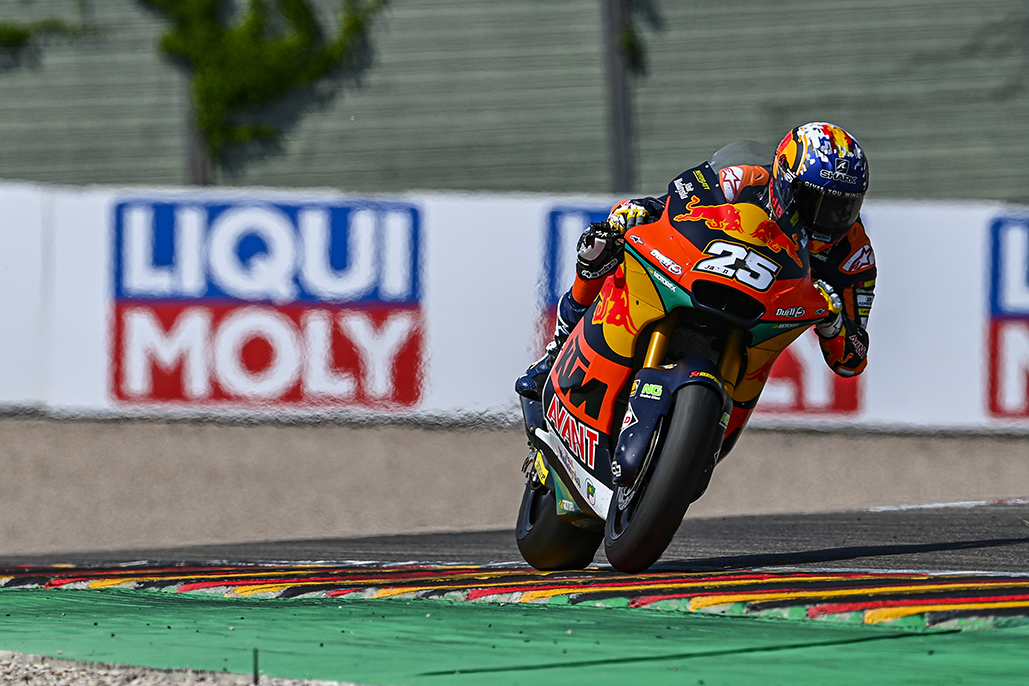 The rookie pounces when it counts to head the grid in Germany, ahead of Di Giannantonio and Gardner.

Raul Fernandez (Red Bull KTM Ajo) is back on top in Moto2™ as the rookie sensation put in a new lap record in qualifying for the Liqui Moly Motorrad Grand Prix Deutschland, taking over at the top from Fabio Di Giannantonio (Federal Oil Gresini Moto2), who was forced to settle for second. Championship leader Remy Gardner (Red Bull KTM Ajo) completes the front row.

Q2
As the session got underway, it was Di Giannantonio who took the initial honours and led the way, with Raul Fernandez lying second and Gardner third. Diggia also had a brush with track limits and had a fast one deleted, but bounced back to go back onto provisional pole. The Italian wasn’t able to hold on to it though as Raul Fernandez stormed to the head of the grid with a new all-time lap record, a 1:23.397 seeing him sail clear by 0.347s at the front. Despite being fast in Free Practice, Gardner wasn’t able to respond… but he will line up third, and just two hundredths off Diggia.

The Grid
Behind that front row, there was a bigger gap back to Marco Bezzecchi as the Italian pulled a nice fourth out the bag after having earlier headed through Q1, with Xavi Vierge (Petronas Sprinta Racing) and Jorge Navarro (+Ego Speed Up) completing Row 2.

Sam Lowes (Elf Marc VDS Racing Team) heads up the third row in seventh, the Brit crashing at Turn 1 but rejoining. He was 0.023s ahead of Japanese rookie Ai Ogura (Idemitsu Honda Team Asia), with Bendsneyder graduating from Q1 to take ninth on the grid. Completing the top ten is another Q1 graduate in Aron Canet. Two riders who would have hoped for a considerable amount more were Augusto Fernandez (Elf Marc VDS Racing Team), who will start 14th, and home hero Marcel Schrötter (Liqui Moly Intact GP), who is down in 17th.

That’s it from Saturday, with Raul Fernandez turning the tables in qualifying. Over race distance can the rookie hit back against his teammate – and the rest? We’ll find out at 12:20 (GMT +2) on Sunday!

Raul Fernandez: “I’m really happy to get another pole, before qualifying the goal was the first row. The team gave me the experience in a difficult moment, they said that in qualifying we could use two sets of tyres, this was the key to get pole position. We’ll see tomorrow what happens because Remy is really strong but in the end we will see!”