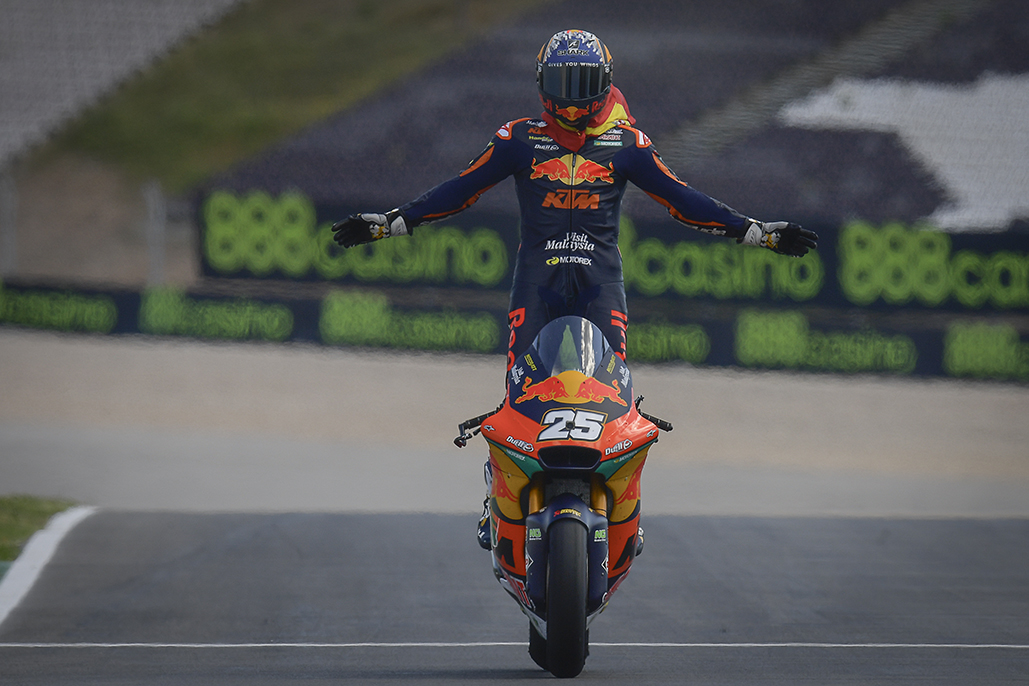 Last year he dominated in Moto3™ on the Algarve. This year, the rookie took to the top step in Moto2™ for the very first time – as Lowes crashes out.

Raul Fernandez (Red Bull KTM Ajo) just loves the Autodromo Internacional do Algarve. After dominating at the track last season to sign off from Moto3™ with a win, the Spaniard returned in Moto2™ with a podium already under his belt and it seemed somewhat like fate. Fighting his way through a few big rivals, the Spaniard crossed the line a second and a half clear for his first intermediate class win, underlining his impressive form so far and moving up to second in the Championship. Aron Canet (Solunion Aspar Team) took his first Moto2™ podium in second after an impressive ride, with Remy Gardner (Red Bull KTM Ajo) charging past Joe Roberts (Italtrans Racing Team) late on to complete the podium. Sam Lowes (Elf Marc VDS Racing Team) crashed out at Turn 1, leaving his key rivals with an open goal…

Lowes was the first big headline, that sending shockwaves through the race. Late on the brakes into Turn 1 after a tough start, the Brit was careering straight towards Gardner’s rear wheel and was forced to pick it up and run wide, the rear end then kicking him off. Rider ok, but some big drama to start the Moto2™ race.

At the front, Gardner led on Lap 1 but Marco Bezzecchi (Sky Racing Team VR46) was the man on the move in the opening exchanges and blasted past on the home straight. Roberts had made a good start from P8 to battle Gardner for P2 as the latter got out of shape coming out of Turn 1. Bezzecchi was able to pull out a healthy one second lead at the front but Canet was making moves and soon, the lead was cut to nothing as Gardner and the five other chasers reeled in the Italian.

Yet more drama unfolded just behind as we saw a huge crash involving Yari Montella (Lightech Speed Up) and Stefano Manzi (Flexbox HP40) at the final corner, both bikes catching fire in the gravel trap. Montella, who highsided, was taken to the medical centre for a check-up and later declared fit. And more: at Turn 5, the two Idemitsu Honda Team Asia riders were down as Ai Ogura made contact with American Racing’s Cameron Beaubier. Ogura got out of shape and couldn’t help but crash into Somkiat Chantra, an unfortunate racing incident between the two teammates.

Lap 11 saw Canet take the lead, but Roberts then pounced at Turn 1 as Canet and Bezzecchi went wide. Bezzecchi slipped to P4 as Gardner also passed the Italian, but one of the pre-race favourites then made a couple of mistakes in the soaring Portuguese heat. That saw the Aussie lose valuable ground as Canet and Roberts made a breakaway, but the Spaniard and American scrapped it out for a few laps and Canet also got a track limits warning. Enter Raul Fernandez. The rookie was lapping far superior to his rivals and he soon picked off both Roberts and Canet to take the lead with four to go, late race pace searing him through.

The rookie pulled 0.7s clear in three laps, setting another fastest lap of the race on Lap 21 of 23, a 1:42.86, and his teammate Gardner was finding some late pace too in P4, the Australian reeling in Roberts and Canet. Three personal best laps from Gardner was mega stuff but nothing was going to stop Raul Fernandez, on the final lap his lead was up to 1.2 seconds and it seemed the job was done as attentions turned to the three-way scrap for P2 and P3.

Roberts lunged up the inside of Canet at Turn 11, but Canet then dived back at Turn 13, but both ran slightly wide to give Gardner an invitation. Roberts switched to the inside for Turn 14 but the narrow line he took saw him open a small gap for the Aussie to squeeze into, an that he did – making some contact but getting through, Roberts staying on but watching th podium fade away.

Up the road though, Raul Fernandez had rounded the final corner to win his first Moto2™ race, with Canet cementing his first intermediate class podium with a hard-earned P2, escaping the discussion on whether rubbing is racing raging just behind him. Gardner’s third, however, sees him head to Jerez as Championship leader for the first time.

Roberts was unlucky to lose out on a podium in Portimão but it was nevertheless a great ride from the American. Augusto Fernandez (Elf Marc VDS Racing Team) backs up his Doha P6 with P5 as the Spaniard continues to find form in 2021, and Bezzecchi was eventually forced to settle for P6 having led in the early laps. Xavi Vierge (Petronas Sprinta Racing) was a second behind Bezzecchi in a solid P7, with Hector Garzo (Flexbox HP40) earning his first points of the season in P8. Beaubier is a top 10 Moto2™ finisher after a brilliant ride to P9 on his first visit to the Algarve International Circuit, and Marcel Schrötter (Liqui Moly Intact GP) completed the top 10.

As we leave the Algarve, the Moto2™ Championship is shaken up after another stunner. Heading to Jerez, three points split Gardner, Raul Fernandez and Lowes – so it’s game on in the Moto2™ title race!

Raul Fernandez: “Unbelievable. I want to say thanks to my team, they brought me the best bike of the weekend for the race. Yesterday I had bad luck in qualifying with the yellow flag, but this morning in warm up I said ‘eh, I have an incredible bike for the end of the race’. I had this problem in Qatar at the end of the race, I didn’t have too much tyre. It was incredible with my team and my family, it’s incredible. I don’t have words, I want to say thanks. We will see in the next race, this is one of my best tracks and we will see in Jerez.”