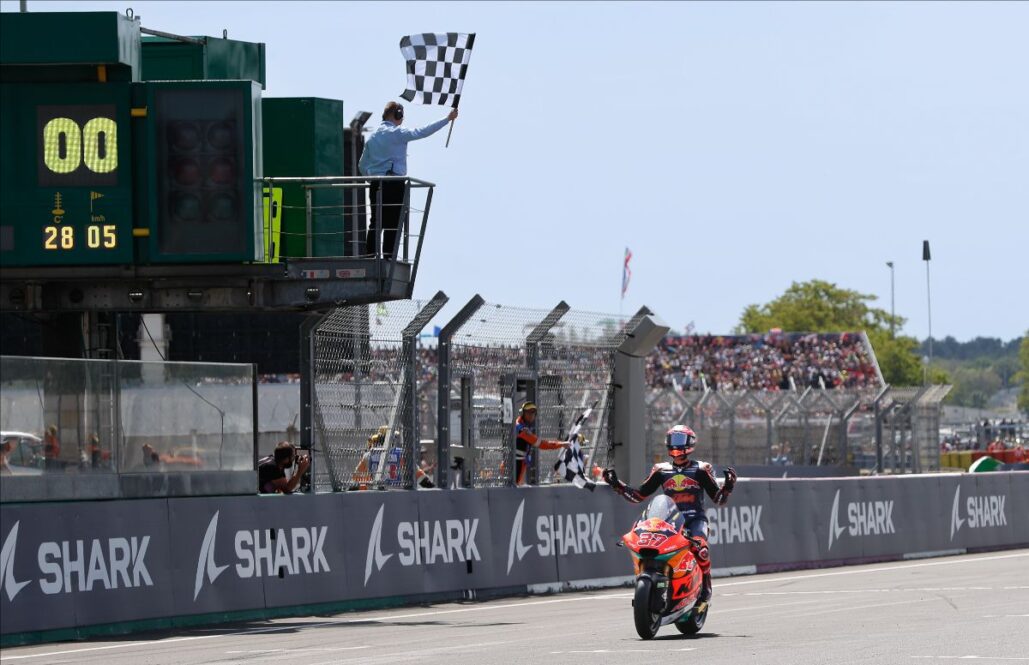 The Spaniard gets back on top as teammate Acosta crashes out and Canet beats Chantra and Beaubier to second.

Acosta converted his first Moto2™ pole position into the early race lead while Fernandez slotted into second, one up on where he had qualified. Albert Arenas (Inde GASGAS Aspar Team) was third initially before being passed by Alonso Lopez (MB Conveyors Speed Up) on Lap 2, then Canet was into the podium places when he got by Lopez on Lap 5 at Turn 3.

By then, the top two had a margin over the rest of three seconds and growing. Still, Fernandez was keeping in touch with Acosta, thanks in part to a big wobble for the latter exiting Raccordement on Lap 5. A lap later, Lopez and Arenas were down in the gravel together, however, as the Aspar rider tried to go through a diminishing gap at Musee.

Meanwhile at the front, the pole-sitter had just started to put the hammer down when he lost the front through La Chapelle, rider ok but his hopes of a breakthrough Moto2™ victory dashed. That elevated Fernandez to the lead and Canet to second, but the man with the bowtie was coming under pressure from Beaubier and Chantra.

When Beaubier ran just a little wide at Musee on Lap 14, Chantra pinched third, then put a move on Canet a lap later. In doing so, he made room for the American to also go past Canet and reclaim third, but Canet turned the tables on Lap 18, passing Beaubier from a long way back at the Turn 3/Turn 4 chicane and making it stick.

As Fernandez continued to enjoy a margin of six to seven seconds over the rest, second-placed then Chantra outbraked himself at Garage Vert on Lap 18 and had to let his bike run wide. Not only did he cede position to Canet and Beaubier, the Thai rider had cost himself a full second of time, handing a free kick to his rivals in the battle for the podium.

Next it was Beaubier who invited some pressure when he ran wide at La Chapelle on the third-last lap, and Chantra made the pass a lap later as they ran through Turn 13. Meanwhile, Vietti was finally into the top 10, despite running through the gravel at Garage Vert earlier in the race.

Up ahead, Fernandez eased off in the closing laps and cruised to victory by an official margin of 3.746 seconds. The win is his first since the 2019 San Marino Grand Prix, and his first altogether for Red Bull KTM Ajo. A further 0.882 seconds behind Canet, who gained a little breathing space in second, was Chantra in third, with Beaubier a career-best fourth despite losing out on that first podium.

Arenas managed to remount after his incident with Lopez but could only get back to 19th, missing out on the points. His Inde GASGAS Aspar team-mate Jake Dixon, who did not get away well from the middle of the front row, also pressed on after an early crash from eighth position, but finished even further back in 21st spot. Among those who did not make the chequered flag at all were Lopez and title contender Tony Arbolino (Elf Marc VDS Racing Team).

Arbolino and Fermin Aldeguer (MB Conveyors Speed Up) went down in synchronised fashion at La Chapelle on Lap 2, although without contact, and that capped off a difficult day for the Elf Marc VDS Racing Team. Before the race had started, it was down to one bike due as Sam Lowes was declared unfit after reporting neck pain and the onset of dizziness after Warm Up. He’d had a nasty highside in Q2.

In the World Championship, Vietti has moved to 108 points, second-placed Ogura is a slightly closer 16 points behind, and Fernandez has climbed to fifth. That’s it for another intriguing weekend of Moto2™. Join us next time when Round 8, the Gran Premio d’Italia Oakley, unfolds at the Autodromo Internazionale del Mugello in two weeks!

Augusto Fernandez: “It feels very good to be back here. It’s been a long two-and-a-half years, waiting for this moment again. Already at the beginning of the season, I was feeling good, so we just had to let the moment come. In the end, this weekend I felt very good from Friday, so we kept the momentum all weekend and we finally did it. The pace at the beginning was so, so, so high. Pedro did an awesome first part of the race, he was pushing a lot, but his moment will come. So, congrats to him for the first half of the race, it was amazing. Then, it was a hard race to manage the distance. When you are alone there, to manage the lap times and the distances, it’s even harder than fighting in a group, so I’m very happy. I want to thank all my family, my dad, my mum, and my brother, and, well, all my friends, everyone… my team… everyone!”