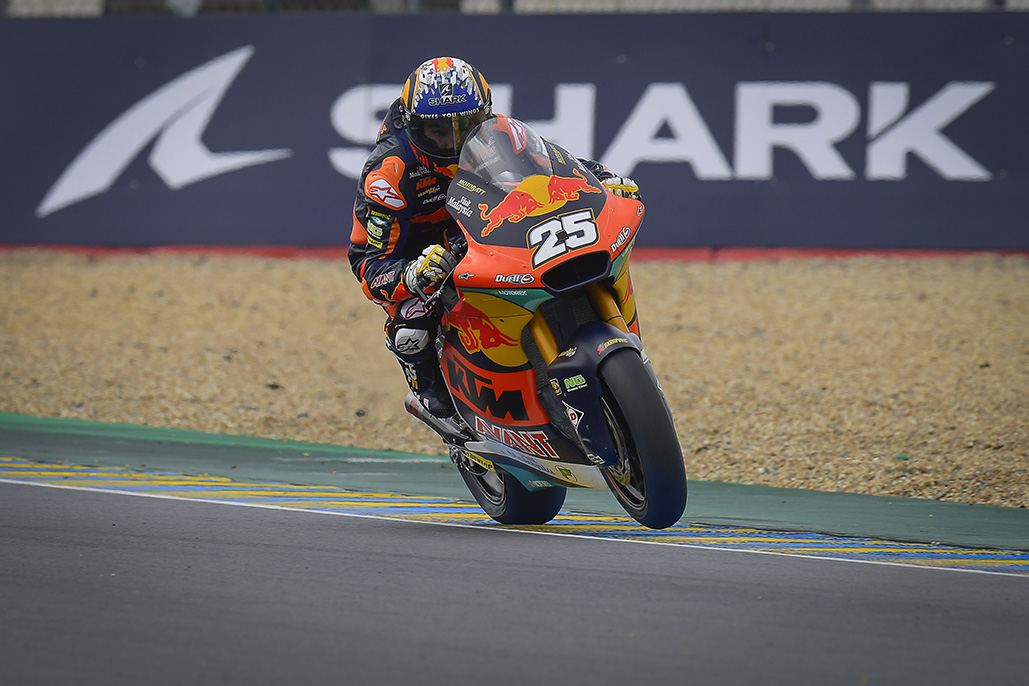 The rookie continues his roll, this time in qualifying, to head Bezzecchi and Roberts on Saturday

There’s something about Red Bull KTM Ajo rookies in 2021! Moto2™’s Raul Fernandez clinched his maiden intermediate class pole position thanks to a 1:50.135 in a damp Q2 at the SHARK Grand Prix de France, beating Marco Bezzecchi (SKY Racing Team VR46) to the top by over two tenths. Q1 graduate Joe Roberts (Italtrans Racing Team) completes the front row, the American pulling some pace out of the bag on Saturday after a difficult Day 1.

A dry Q1 saw Roberts, Ai Ogura (Idemitsu Honda Team Asia), Simone Corsi and MV Agusta Forward Racing teammate Lorenzo Baldassarri earn themselves a shot at pole position in Q2, but a spanner was thrown in the works before the green light. Rain once again started to fall at Le Mans, but once more, it didn’t stay around for long. It was in the air and the surface was damp but tyre choice was far from cemented.

Sam Lowes (Elf Marc VDS Racing Team) was out on slick tyres at first and his closest Free Practice challenger Raul Fernandez initially went out on wet tyres, then got a box call, but the Spaniard went straight back out on the wets. Roberts ran straight into the gravel at Turn 8 in some early drama too, as then Lowes pulled into pitlane for… wets.

On track meanwhile, Championship leader Remy Gardner (Red Bull KTM Ajo) was the early pacesetter from Ogura, but there was plenty of drama to come. Ogura crashed unhurt on the exit of Turn 7, Marcel Schrötter (Liqui Moly Intact GP) went down at Turn 14 shortly afterwards and then Jorge Navarro (MB Conveyors Speed Up) was the next to crash at Turn 8. Raul Fernandez was just behind his compatriot and ran straight on too. Nicolo Bulega (Federal Oil Gresini Moto2) and Corsi were the next riders to crash as the field tried to find the limit.

All that while at the top, Roberts was provisional pole, but it didn’t last too long. Raul Fernandez pulled out 1.2s on the American with four and a half minutes to go, but the number 16 soon returned the favour to go back to P1 by 0.6s. Roberts improved his lap again thereafter to go a second clear of the competition, but Gardner was on a charge and was next to take over. Lowes, back out on the wets, moved himself into third in the meantime… but Raul Fernandez was lighting up the timing screens. This time round, it was seventh tenths in his pocket at the top.

With conditions continually improving, Roberts then slotted back into P2 as Gardner made a mistake in the third sector to end his hopes of a pole position. No such mistake came from his teammate. Raul Fernandez pulled out even more time to take over at the top once more, with Bezzecchi then shooting up the timesheets to slot into second. Roberts was demoted to third, but holds on to an impressive front row after a tougher Friday. And Raul Fernandez? No one had an answer for the Moto2™ rookie sensation and the young Spaniard claimed his first intermediate class pole position.

Aron Canet (Inde Aspar Team) left it late to claim P4 in qualifying, his best of the year, and the Spaniard is joined by compatriot Augusto Fernandez (Elf Marc VDS Racing Team) and Bo Bendsneyder (Pertamina Mandalika SAG Team) on the second row. Gardner slipped down to P7 in the closing stages and was over a second adrift of his teammate after running wide at Turn 8 on his last lap.

Hector Garzo (Flexbox HP40) recovered from his big Friday crash to pick up a best Saturday result of the season in eighth, just ahead of his teammate Stefano Manzi. And Lowes? There’s work to do for the man second in the Championship after his worst Q2 of the season, the Brit starting down in 10th.

That’s it from a tricky Saturday at Le Mans, with the weather likely to change again on Sunday! Can the rookie hold on, or will it be another shuffle come race day? Find out at 12:20 (GMT +2) local time.

Raul Fernandez: “I’m very happy because yesterday was really difficult and today I had two practices in these conditions and I said please no… one maybe ok but two is more difficult! But I’m happy because in FP3 and qualifying was good, the feeling wasn’t the best but I was on top and that’s the most important. Tomorrow we’ll see!”