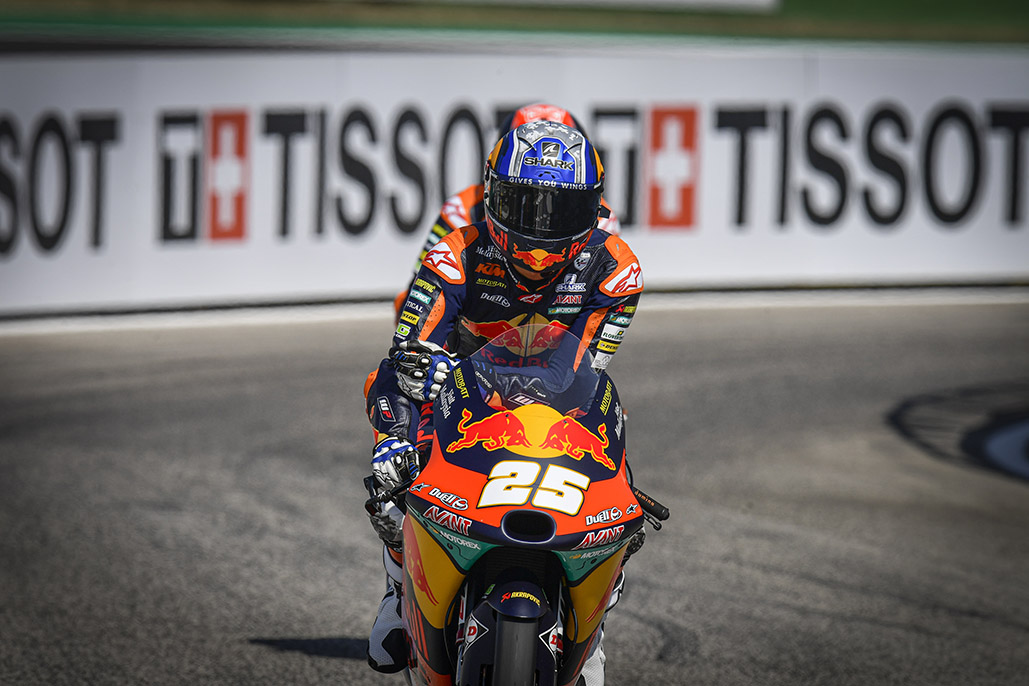 The Spaniard beats home heroes Arbolino and Migno by less than a tenth, with McPhee facing a fight back from 20th on Sunday.

Red Bull KTM Ajo’s Raul Fernandez clinched his third Moto3™ pole position of the season at the Gran Premio TISSOT dell’Emilia Romagna e della Riviera di Rimini, putting in a late dash to take to the top. With just 30 seconds remaining on the clock, the Spaniard snatched it away from home hero Tony Arbolino (Rivacold Snipers Team) by a tiny 0.088, with fellow Italian Andrea Migno (Sky Racing Team VR46) putting in a late charge to lock out the front row, still within a tenth.

There was some drama earlier in the afternoon before the final charge, with last weekend’s San Marino GP winner John McPhee (Petronas Sprinta Racing) failing to make it out of Q1 and, as a result, starting 20th on the grid. Instead, it was Deniz Öncü (Red Bull KTM Tech 3) the first through from Q1, joined by eventual front row man Arbolino, Kaito Toba (Red Bull KTM Ajo) and Filip Salač (Rivacold Snipers Team).

Arbolino looked like he would be the star of the show too, with the Italian holding on to provisional pole heading into the final push of the session. A crash for Tatsuki Suzuki (SIC58 Squadra Corse) just ahead of him scuppered a chance to improve though, and Fernandez would go on to pounce. A late 1:41.705 from the Spaniard, despite being six tenths adrift of Celestino Vietti’s (Sky Racing Team VR46) new lap record set in FP3, was enough for Fernandez to take pole number three of the year.

The chequered flag came out not long after, with Vietti clinging on to the final front row place just behind Fernandez and Arbolino. His Sky Racing Team VR46 teammate Andrea Migno had other ideas, however, pushing him down to fourth before Albert Arenas (Gaviota Aspar Team Moto3) also pipped the number 13; the Championship leader making a valuable leap up from 16th to head the second row. Sterilgarda Max Racing Team’s Romano Fenati slots in just behind Vietti in sixth, meaning the number 55 has secured back-to-back slots on the front two rows of the grid for the first time since the Japanese and Australian Grands Prix back in 2017.

Fronting row three, meanwhile, is Q1 graduate Kaito Toba. He was set to be joined there by compatriot Suzuki, who was eighth quickest in the session, but the SIC58 rider was declared unfit for a broken wrist sustained in his crash, so Leopard Racing’s Jaume Masia moves up to start eighth. Reigning FIM Moto3™ Junior World Champion Jeremy Alcoba (Kömmerling Gresini Moto3) will therefore get a third row start as he gains a place too, tenth fastest in the session but starting ninth. Dennis Foggia (Leopard Racing) will be the man completing the top ten on the grid.

As well as McPhee, who faces a fight back from 20th, there’s another name missing so far: Ai Ogura (Honda Team Asia). The man second overall in the standings, and polesitter last week, was P12 in Q2 but will start 11th, leaving him a little more work to do to take the fight to Arenas and cut back his five-point deficit.

How’s that for an interesting grid? Tune in for another stunner at 11:00 (GMT+2) as the lights go out for Moto3™ at the Gran Premio TISSOT dell’Emilia Romagna e della Riviera di Rimini.

Raul Fernandez: “I’ve really happy with this pole, it’s different because I did the time alone and in Moto3 it’s very difficult. I’m happy the setting is good for tomorrow, we can fight well which is important in Moto3 and I hope tomorrow we can aim for the podium.”