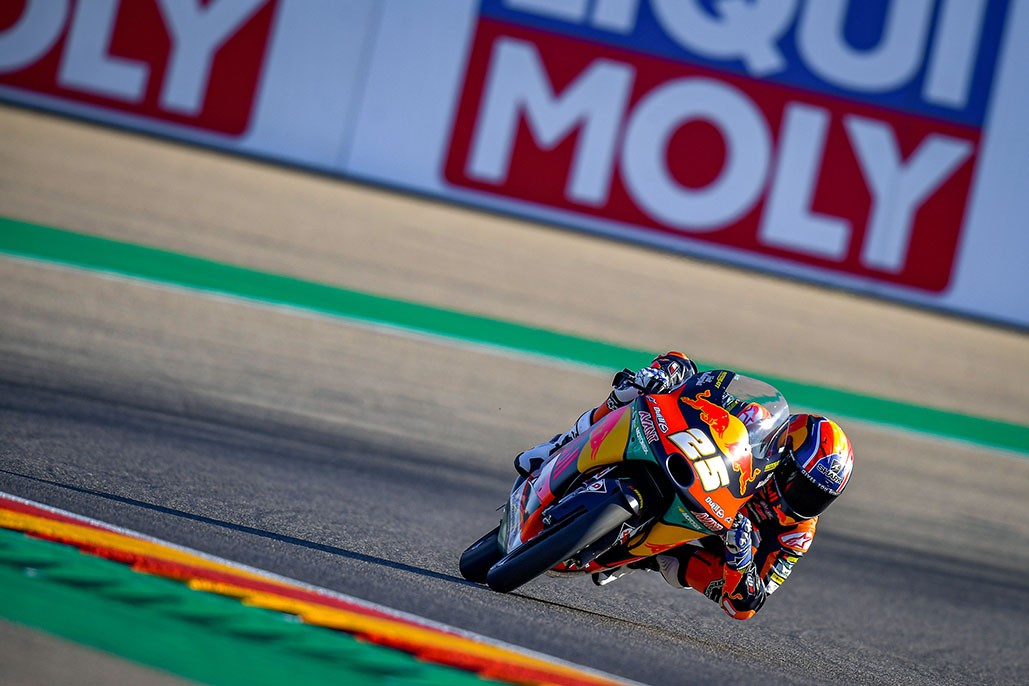 The Spaniard heads the grid at MotorLand once again, ahead of Arbolino and Vietti.

Raul Fernandez (Red Bull KTM Ajo) has done it again! The Spaniard’s 1:57.199 in Q2 at the Gran Premio Liqui Moly de Teruel sees him take a fifth pole of the season, edging out Tony Arbolino (Rivacold Snipers Team) by 0.231. Celestino Vietti (Sky Racing Team VR46) bounced back from a more difficult Friday to complete the front row, as the riders third and fourth overall start the furthest forward of the title challengers on Sunday…

In Q1 it was Filip Salač (Rivacold Snipers Team) who topped the timesheets, and with an impressive advantage of nearly four tenths. The Czech rider was joined by Stefano Nepa (Solunion Aspar Team), Kaito Toba (Red Bull KTM Ajo) and Gabriel Rodrigo (Kömmerling Gresini Moto3) in moving through to Q2, and so the stage was set for the fight for pole.

It was – as ever – Fernandez who led the way early doors, the Spaniard the man on top heading into the classic final shootout. But, again as ever, that classic final shootout would shuffle a good few rows – just not at the top. Fernandez was the only man able to beat his own time, knocking a few tenths off and securing himself a fifth pole of 2020.

It looked like it would be with a substantial gap back to Vietti initially, but Arbolino struck late to take second and home in on Fernandez. Arbolino, who missed the Aragon GP due to mandatory self-isolation, has been quick since his return – and Vietti was also a top qualifier last weekend, despite his tougher Friday this time around.

Fourth goes to Rodrigo as the Argentinean impressed in Q2 despite having to move through Q1, setting his best lap earlier in the session and missing out on the front row by just 0.017. Championship leader Albert Arenas (Solunion Aspar Team) starts fifth in Teruel, with the second row completed by Ayumu Sasaki (Red Bull KTM Tech 3). That’s the Japanese rider’s best qualifying of the year so far, and he was only 0.033 off Arenas.

Aragon GP winner Jaume Masia (Leopard Racing) lines up to try and repeat the victory from seventh place, which is actually ten places less of a task than his impressive charge last weekend. Masia has Q1 graduate Toba and Tatsuki Suzuki (SIC58 Squadra Corse) for company on Row 3.

Tenth place went the way of Ai Ogura (Honda Team Asia), the man second in the Championship taking back-to-back top tens in qualifying for the first time since Styria and San Marino.

Salač, Dennis Foggia (Leopard Racing), Romano Fenati (Sterilgarda Max Racing Team), Jeremy Alcoba (Kömmerling Gresini Moto3) and Darryn Binder (CIP – Green Power) complete the top 15 – with John McPhee (Petronas Sprinta Racing) down in P17 and looking for a comeback on race day. But remember, last weekend’s winner did it from that exact grid position… can McPhee get up there too?

Tune in for the Moto3™ race at the Gran Premio Liqui Moly de Teruel at the very slightly later time of 11:20 (GMT +1) – and remember to check any daylight savings changes!

Raul Fernandez: “Incredible, my second pole here in Aragon. This track is special for me, one of my best tracks and I enjoy riding here. It’s incredible to get a second pole, I want to say thanks to my team and my family, yesterday afternoon they made a surprise for me and it was a +1 in my mentality and I want to say thanks!”