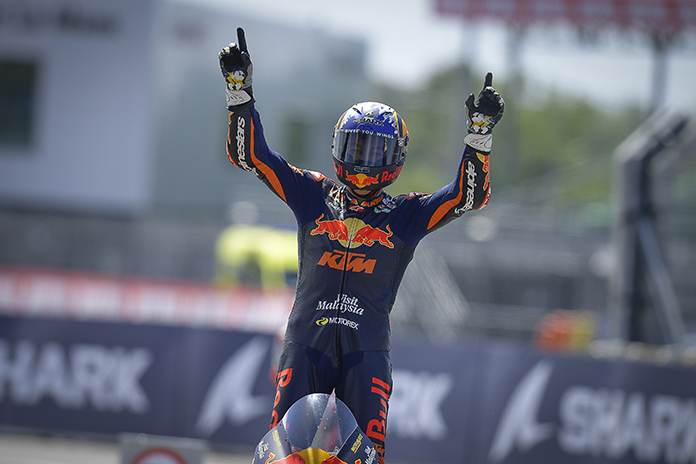 A Red Bull KTM Ajo 1-2, Bezzecchi in third and a dramatic crash out for Lowes sees Le Mans mix up the standings.

With no rain falling since Moto2™ Warm Up, the circuit had a clear dry line after the Moto3™ race. That meant everyone was starting on slicks, and it was Bezzecchi who pounced into the lead from the start as Raul Fernandez managed to cement P2, the field safely negotiating Turns 3 and 4 on Lap 1. There was contact between Gardner and Xavi Vierge (Petronas Sprinta Racing), but disaster was avoided. Not for Aron Canet (Inde Aspar Team) though, who was making early progress before the Spaniard went down hard at Turn 9 on the opening lap, rider ok.

Lap 2 saw Augusto Fernandez (Elf Marc VDS Racing Team) crash out of the top three as Raul Fernandez bridged the early gap that Bezzecchi had pulled on the field. World Championship leader Gardner and then-nearest challenger Lowes were P9 and P8 respectively, with the top three – Bezzecchi, Raul Fernandez and Joe Roberts (Italtrans Racing Team) – enjoying a second lead over the gaggle of riders from P4 to P11.

Lap 4 then witnessed three riders all go off the road at Turn 8 – including Lowes. Up the inside of Vierge, Lowes tucked the front as both went down, with Lorenzo Baldassarri (MV Agusta Forward Racing) running wide just ahead of the duo. Unable to get going again, Lowes’ French GP was over. Then, running P2, Roberts was down at Turn 9 after running in too hot on the brakes and clipping Bezzecchi. meanwhile, Raul Fernandez picked up the baton and took over at the front after a dramatic opening handful of laps in the Moto2™ race.

Bo Bendsneyder (Pertamina Mandalika SAG Team) was occupying P3 with Gardner now up to 4th, but he had hard-charging rookie Tony Arbolino (Liqui Moly Intact GP) on his tail. More drama hit just behind too, as Hector Garzo (Flexbox HP40) crashed out from P6 at Turn 11 with a little helping hand from Fabio Di Giannantonio (Federal Oil Gresini Moto2), the Italian handed a Long Lap penalty. Which he took quickly but overcooked so had to do a second.

At the front though, Raul Fernandez was edging his lead up to a second over Bezzecchi, the latter slowly falling into the grasps of the Bendsneyder, Gardner and Arbolino squabble. The leading quintet were six seconds ahead of sixth place Marcel Schrötter (Liqui Moly Intact GP), the German entangled in a fight with rookies Cameron Beaubier (American Racing), Ai Ogura (Idemitsu Honda Team Asia) and his teammate Somkiat Chantra (Idemitsu Honda Team Asia), up from well down on the grid.

Raul Fernandez was keeping his advantage around the one second mark, with Bezzecchi pulling nearly a second clear of the trio behind him. On Lap 14, the race leader set a 1:36.993 to stretch his lead to 1.2s over Bezzecchi. However, a lap later it was back down to below a second as Fernandez’s teammate Gardner poached third off Bendsneyder at Turn 11 – the Aussie then 2.2s behind the race leader. A lap later, Arbolino then slipped past Bendsneyder too.

Now in clean air, the Gardner charge was on. A fastest lap of the race came in from the Red Bull KTM Ajo rider but it was only narrowly quicker than Bezzecchi ahead of him, the gap separating the top three set at 1.7s with seven to go. Bezzecchi then made a mistake at Turn 8, running wide onto the green, allowing Gardner to stroll through into P2. With the bit between his teeth, Gardner started to reel in teammate Fernandez by four tenths on Lap 20 of 25, setting up a very intriguing final five laps between two title contenders.

Undeterred though, Raul Fernandez was holding his nerve. As he clocked another lap and headed onto Lap 23, the Spaniard set his fastest lap of the race and his lead was now 1.8s. And with one lap remaining in France, it went up another tenth. No mistakes were made from the rookie sensation on the final lap, and Fernandez crossed the line to win his second race of 2021. Gardner made it a Red Bull KTM Ajo 1-2 as a single point splits Gardner and Raul Fernandez in the overall standings, and Bezzecchi pockets his second podium in a row with a solid P3 ride.

Arbolino landed his best Moto2™ result with a fantastic P4 at Le Mans, just ahead of an impressive ride from Bendsneyder as the Dutch rider earns his best result of the season, the same can be said for sixth place Schrötter. Ogura cements another top 10 in P7 as three rookies finish inside the top 10, Di Giannantonio took P8 after his two Long Laps, a solid salvage job.

Beaubier crashed out of sixth place at Turn 3 in the latter stages, Tom Lüthi (Pertamina Mandalika SAG Team) was another rider to crash out of the points.

And so it’s another day that belongs to Red Bull KTM Ajo, as Gardner and Raul Fernandez now sit P1 and P2 in the World Championship. Lowes loses crucial ground as Bezzecchi keeps tabs on his title rivals, with the latter’s home race at Mugello now next up. Tune in for more in a fortnight!

Raul Fernandez: “It was a really difficult race, especially the second sector was wet, the front tyre was too cool at the start and I waited four or five laps behind Marco. When I thought the tyre was warmer I pushed a bit more, overtook Marco and pushed like in FP2, and it was really good. In the end I could do a good race and I’m really happy. It’s amazing to win again and in difficult conditions. I like this track a lot I remember I got second in the Junior World Championship here in 2018. Incredible, I want to thank my team as they keep me calm in difficult moments and that’s the most important.”