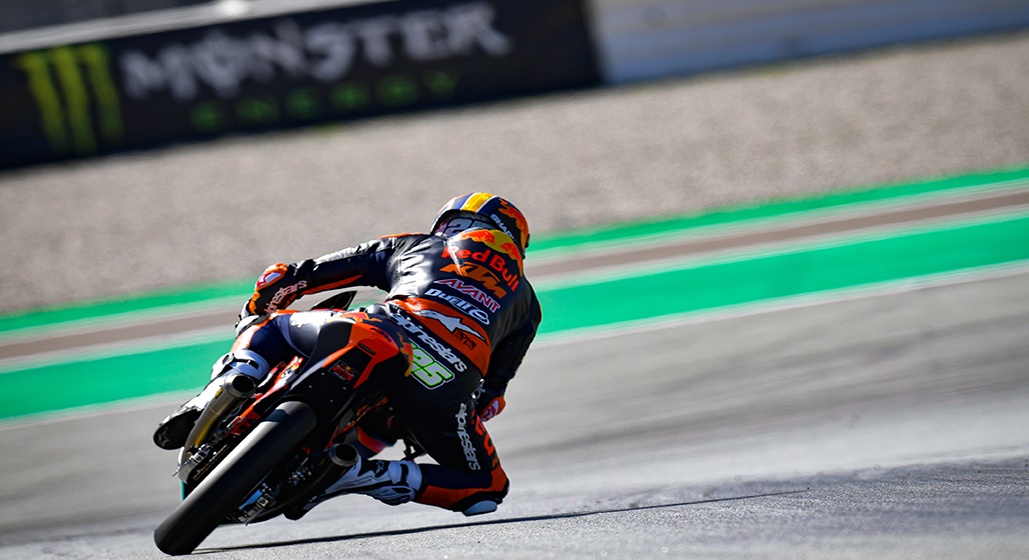 The Red Bull KTM Ajo rider ends the day with a little breathing space once again, ahead of Masia and Fenati.

Raul Fernandez (Red Bull KTM Ajo) is making something of a habit of going fastest on Friday, and the Gran Premi Monster Energy de Catalunya was no different as the Spaniard ended the day with a fairly comfortable margin ahead of compatriot Jaume Masia (Leopard Racing). Last week’s winner, Romano Fenati (Sterilgarda Max Racing Team), completed the top three on the combined timesheets.

FP1
FP1 saw a familiar name at the top once again: Fernandez. The Spaniard made it three FP1s in a row at the top, and was the only man to dip beneath the 1:49 barrier as he pulled four tenths clear with a late 1:48.853. Husqvarna history maker Fenati was the man in second in the session, ahead of his compatriot Tony Arbolino (Rivacold Snipers Team) a further tenth back in third.

Masia ended FP1 0.575 seconds adrift in fourth, but he had some close company courtesy of Petronas Sprinta Racing’s John McPhee. Championship leader Albert Arenas (Gaviota Aspar Team Moto3) was next up in sixth, with his closest rival as it stands, Ai Ogura (Honda Team Asia), down in an uncharacteristic P25.

There were no crashes in the session.

FP2
In the afternoon, the wind was higher to complicate life for the lightweight class, and early on Fernandez stole a few more headlines but this time with a spectacular save. Ultimately it was Masia who came out on top in FP2 though, 0.284 ahead of Darryn Binder (CIP – Green Power). Carlos Tatay (Reale Avintia Moto3) was the only other man within half a second of the top after he put in an impressive session, with the three men at the top of the Championship all a little further back: McPhee took P10, Ogura P13 and Arenas P14. For Ogura, however, that was a move forward after his P25 in FP1.

The main headlines from FP2, however, were the crashes. First to go down was Celestino Vietti (Sky Racing Team VR46) as he tumbled at Turn 3, before McPhee went down at Turn 10. Gabriel Rodrigo (Kömmerling Gresini Moto3) and Stefano Nepa (Gaviota Aspar Team Moto3) were then both caught out at Turn 1 a few minutes apart, before another crash at Turn 10, this time for Arbolino. He headed to the Medical Centre but was given the all-clear. Masia then crashed at Turn 7, before Davide Pizzoli (BOE Skull Rider Facile Energy) was the final crasher of the session, at Turn 10.

Ryusei Yamanaka (Estrella Galicia 0,0) avoided a crash with a miracle save, adding to Fernandez’ earlier efforts in the sweepstakes for biggest spectacle of the day.

After a day of two halves in Barcelona then, it’s Fernandez’ FP1 time that puts him on top once again, ahead of Masia’s FP2 fastest by 0.281. Fenati and Arbolino’s best times put them into P3 and P4 overall, respectively, with Darryn Binder ending Friday in fifth thanks to his quickest lap in the afternoon.

Despite his crash, McPhee is the fastest of the Championship-leading trio in P6, but Arenas is less than a tenth off. Both set their quickest efforts in the morning. Niccolo Antonelli (SIC58 Squadra Corse) had a good first day as he slots into eighth, 0.029 off Arenas, with Tatay just another 0.033 off Antonelli, in ninth. Kaito Toba (Red Bull KTM Ajo) completed the top ten.

Ogura ultimately ended the day down in P23, and he’ll be one of the first pushing to improve in FP3 as the fight to head through to Q2 really gets down to business. Tune in for that at 9:00 (GMT +2), before Moto3™ qualifying starts from 12:35.