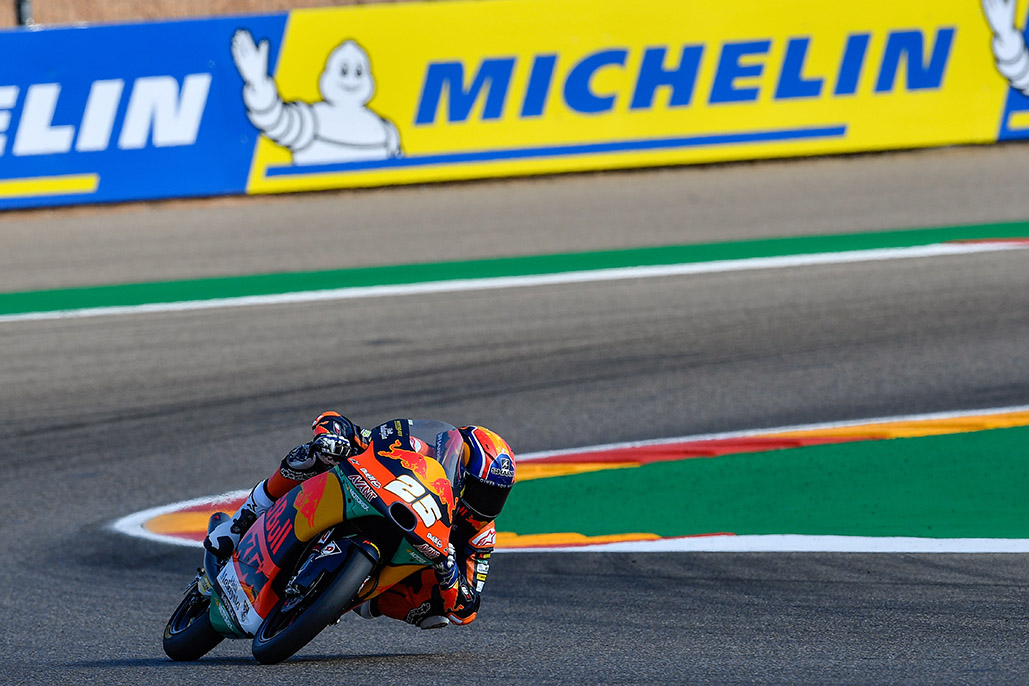 The Spaniard takes it by just 0.059, with Arenas completing an all-KTM front row.

Raul Fernandez (Red Bull KTM Ajo) backed up going fastest on Friday by taking a fourth pole position of the season at MotorLand Aragon, the Spaniard coming out on top in a duel with Le Mans winner Celestino Vietti (Sky Racing Team VR46) by just 0.059. The two were in a class of their own on Saturday, with Championship leader Albert Arenas (Solunion Aspar Team Moto3) taking third to complete an all-KTM front row but over half a second back.

In Q1 there were a few key names looking to move through, including John McPhee (Petronas Sprinta Racing) and Gabriel Rodrigo (Kömmerling Gresini Moto3) as the two had laps cancelled late on in FP3 after Yellow Flags invalidated them- The two moved through behind Carlos Tatay (Reale Avintia Moto3) at the top of the session and Ayumu Sasaki (Red Bull KTM Tech 3) in second, with the clock was then reset and the four joining the rest fighting it out for the top 18 places on the grid.

CIP – Green Power’s Darryn Binder was the first man to top the timesheets early on in Q2, before John McPhee hit back to take over and immediately depose the South African. And then came Fernandez: the Spaniard hit the top soon after, then later going even faster to bang in a 1:57.681.

Only 11 riders had set a lap mid-session, however, so would the tables turn? With a couple of minutes left, Vietti managed to leapfrog the two Sterilgarda Max Racing Team riders, Alonso Lopez and Romano Fenati, who had been in P2 and P3 respectively, to become the closest challenger to Fernanez’ impressive lap. Vietti was now within a couple of tenths and on another solid lap, and in even better news for the VR46 Academy rider, he was setting his laps on his own too… something that most definitely bodes well for race day.

It all came down to the final push for the number 13, and he got even closer as he stayed in touch with Fernandez’ time throughout the lap. Could he do it? Ultimately no, but it was incredibly close as the Italian crossed the line just 0.059 off Fernandez, with no one else able to challenge the number 25.

Arenas moved up on his final lap to take the final place on the front row, with Alonso Lopez shuffled down to fourth but nevertheless putting in an impressive session as he keeps his recent pace rolling. The number 21 will, however, have to take a Long Lap Penalty in the race that he was given following his collision with teammate Fenati last time out. Tatsuki Suzuki (SIC58 Squadra Corse) denied that same Fenati fifth on the grid as the Japanese rider pipped the Italian by just 0.004, pushing the number 55 down to P6.

Tatay went from Q1 to seventh, joined on the third row by Championship challenger Ai Ogura (Honda Team Asia) and another Q1 graduate: Rodrigo. McPhee completes the top ten, missing out to Rodrigo by just 0.001 but beating Darryn Binder by 0.012 as the South African starts just outside the top ten.

That’s it from an exciting Saturday at Aragon, with the stage set for another good battle on Sunday. Can the likes of Fernandez and Vietti escape? Or will we see another classic freight train battle? Find out at the later time of 12:00 (GMT +2) as the lights go out for Moto3™!

Raul Fernandez: “Yesterday it was an incredible feeling, and this morning with the cold temperatures we had some more problems with the tyres but we knew that in qualifying with the temperature then it would be better and we would be stronger. We didn’t think too much about the morning in qualifying, but it was chaos – Moto3 qualifying is always chaos – but I could get an incredible time and alone, a bit of slipstream in the back straight but we’re ready for the race. We need to prepare the last part of the race better… and to enjoy it more!