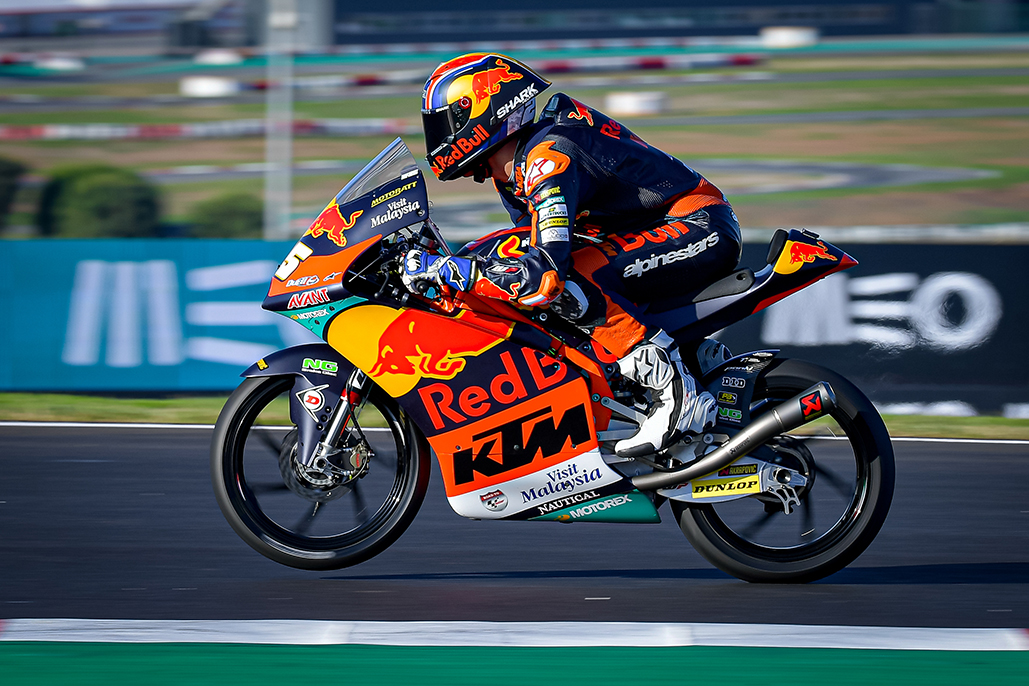 Fernandez signs off with pole; Ogura and Arenas start fifth and sixth… and Arbolino faces a fight back on Sunday.

Raul Fernandez (Red Bull KTM Ajo) will sign off his brief but successful Moto3™ career from another pole position, the Spaniard hitting the competition for six in the Grande Premio MEO de Portugal for pole number six. Rookie of the Year Jeremy Alcoba (Kömmerling Gresini Moto3) will start second, with Ayumu Sasaki (Red Bull KTM Tech 3) taking third and his first front row of the year.

There were some big Championship dramas just behind that. Tony Arbolino (Rivacold Snipers Team) didn’t make it through Q1 and faces a fight for the crown from P27 on the grid, and Ai Ogura (Honda Team Asia) left it until a last lap dash to move through. The Japanese rider kept it together to take fifth in Q2 however, and will start just ahead of Championship leader Albert Arenas (Gaviota Aspar Team Moto3).

Q1 was a tense one right to the last as lady luck looked kindly on one contender and not the other, Ogura slicing through on his final attempt – when he’d not even set a time before that – to take third and move through, and Arbolino not managing to pull anything out the hat, trapped in traffic and rolling off. And so, the Italian starts P27. In the end, Darryn Binder (CIP – Green Power) topped the session from Tatsuki Suzuki (SIC58 Squadra Corse), with Niccolo Antonelli (SIC58 Squadra Corse) fourth behind Ogura.

Q2 saw chaos reign for many as well, but Fernandez started and ended the session on top. The Spaniard set the first fastest lap before Sasaki hit back and then Alcoba, the three asserting their pace from the off, but Fernandez had something left in the locker as he put in a 1:48.051 for provisional pole. That remained unchallenged to the end, an impressive lap and ahead of that aforementioned chaos.

For one big group of riders, the intention was to cross the line for their final push right before the flag. The reality was that most missed the cut by millimetres, and lost the chance at a final push. One of the only men to improve late on was Ogura, however, as the Championship contender once again proved his mettle with a late dash. It was enough for fifth, just ahead of Arenas and behind fellow Q1 graduate Tatsuki Suzuki on Row 2.

Antonelli heads Row 3, another Q1 runner getting the job done, with Leopard Racing’s Dennis Foggia and Jaume Masia in eighth and ninth, respectively. However, both the Leopard machines must do two Long Lap penalties in the race for irresponsible riding in FP2 on Friday.

Gabriel Rodrigo (Kömmerling Gresini Moto3) took tenth despite a crash, with Deniz Öncü (Red Bull KTM Tech 3) and Sergio Garcia (Estrella Galicia 0,0) joining him on Row 4. Barry Baltus (CarXpert PrüstelGP) took a best ever P13 on the grid, with Celestino Vietti (Sky Racing Team VR46) alongside him. Yuki Kunii (Honda Team Asia) was 15th fastest, although he is another with a penalty to serve in the race, although a single Long Lap in his case.

And so, Ogura heads the challengers on Sunday – just – with Arenas for close company and Arbolino facing down a rollercoaster and a mountain. Who will take the 2020 Moto3™ crown? Sunday will decide as Fernandez leads them away at 11:00 (GMT).

Raul Fernandez: “It’s amazing, incredible. I end my life in Moto3 with a pole position, I hope tomorrow we can do minimum a podium, I will fight for the victory and I’m very happy to be here in my last race here. It was important to start from the first place. It was a really difficult session, windy, and it was difficult to ride with the wind but I’m happy. For the race we need to enjoy it!”