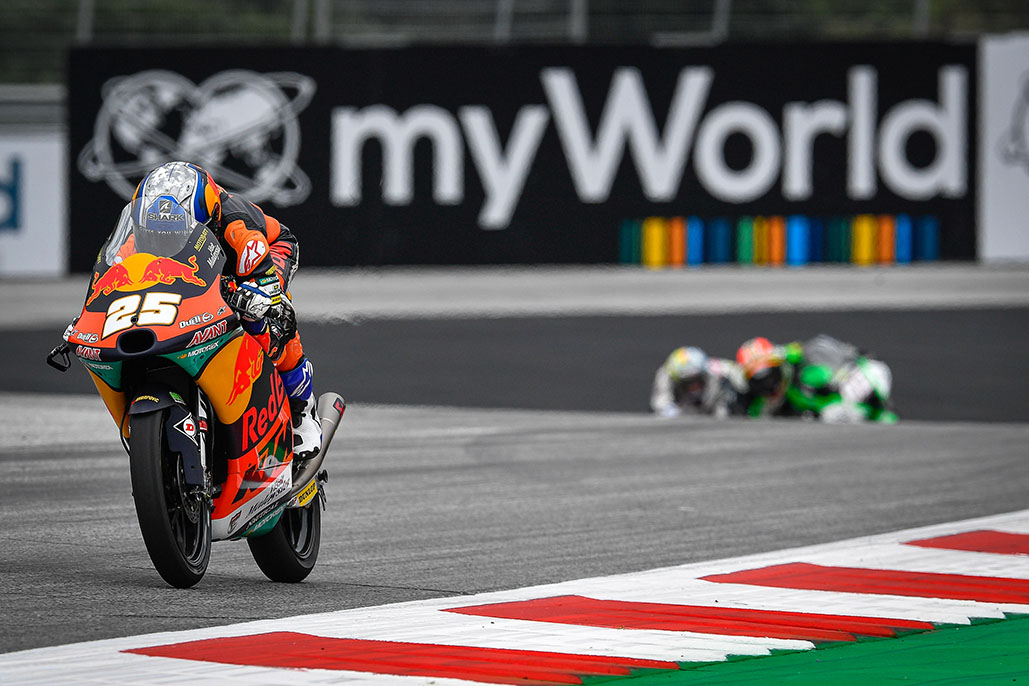 The Spaniard followed up his maiden pole position with another, but the front row are split by just 0.029.

Red Bull KTM Ajo’s Raul Fernandez has followed up his maiden pole taken in Brno with a perfect rinse and repeat at the Red Bull Ring at the myWorld Motorrad Grand Prix von Österreich. It was close at the front though as the Spaniard heads up the grid by 0.011, with Championship leader Albert Arenas (Valresa Aspar Team) making it a 1-2 for KTM machinery as he took second. Arenas’ key rival, John McPhee (Petronas Sprinta Racing), starts third but was only 0.029 off the top.

In Q1 in Austria, it was Riccardo Rossi (BOE Skull Rider Facile Energy) on top as the Italian deftly negotiated a gaggle of four all pushing to slipstream, including both Red Bull KTM Tech 3 riders, Ayumu Sasaki and Deniz Öncü, who also made it through. Jeremy Alcoba (Kömmerling Gresini Moto3) split the two Tech 3s to advance to Q2 as well and with that, the stage was set in the fight for the top 18 places on the grid.

Celestino Vietti (Sky Racing Team VR46) was the man in charge first, before he was deposed by Arenas – the Spaniard using the Italian’s own slipstream – but at the end of a classic mad Moto3™ dash it was Fernandez who came out on top, seemingly out of nowehere. Arenas and McPhee are close, however, and Jaume Masia (Leopard Racing) in fourth is still within a tenth of pole as Moto3™ stays on brand as some of the closest racing on Earth.

Joining Masia on Row 2 are Vietti and Tatsuki Suzuki (SIC58 Squadra Corse), who was in the group with both the number 13 and Arenas in Q2 in a fight that seemed more like a race at times. The third row is headed up by Gabriel Rodrigo (Kömmerling Gresini Moto3), with Friday’s fastest, Tony Arbolino (Rivacold Snipers Team), just behind him in P8. Rossi, after his impressive Q1 form, takes a best ever qualifying position in ninth – beating his previous best by a whopping eight places. Öncü completes the top ten in his second best qualifying ever on the world stage.

Brno winner Dennis Foggia (Leopard Racing) joins Öncü on the fourth row in P11, with Andrea Migno (Sky Racing Team VR46) in 12th. Championship contender Ai Ogura (Honda Team Asia) had a tougher Saturday as he lines up in 13th, and he’ll be pushing from the off to get back on terms with Arenas and McPhee, and make sure he keeps his near faultless season intact. Filip Salač (Rivacold Snipers Team) and Niccolo Antonelli (SIC58 Squadra Corse) took P14 and P15, respectively.

Kaito Toba (Red Bull KTM Ajo) was the sole crasher of the session as he highsided at Turn 10, heading for the Medical Centre but judged fit thereafter.

That’s it for Saturday, the grid is decided and it’s an interesting one for race day – as is the weather forecast. How will it play out? Find out from 11:00 (GMT +2) as the lights go out for Moto3™.

Raul Fernandez: “Qualifying was incredible. Yesterday the feeling with the bike wasn’t good, and this morning in the wet we didn’t try the new settings, I tried it in qualifying. On the first exit I couldn’t stop the bike, I don’t know why, I couldn’t brake. On the second it was a bit better, but then I don’t know how I did this super good lap! Tomorrow we need to improve this aspect, but I’m really happy for me, my team, my family and tomorrow I hope we’ll be fighting for the podium.”