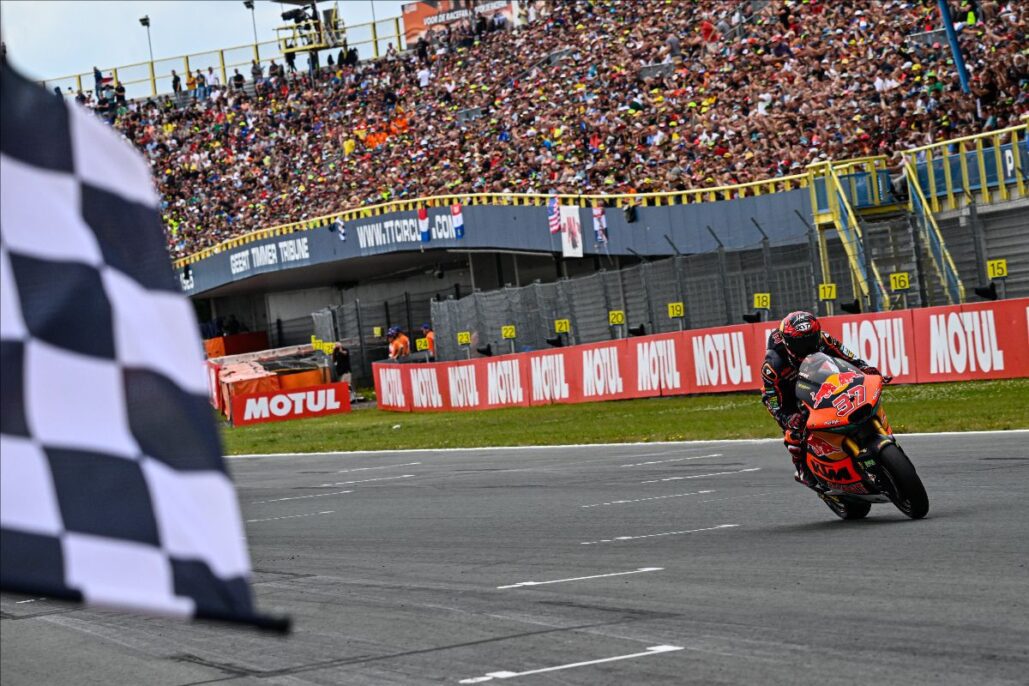 The Moto2™ World Championship sits on a knife edge going into the summer break after Augusto Fernandez picked up his second win in a row, coming out on top in a true classic at the Motul TT Assen. The Red Bull KTM Ajo rider is now equal on points with Celestino Vietti (Mooney VR46 Racing Team), who finished fourth, although the Italian leads as it stands thanks to more wins so far this season.

Ai Ogura (Idemitsu Honda Team Asia), meanwhile, sits just a point further back after hauling his way back from as low as 16th to claim second on the day, with polesitter Jake Dixon (Inde GASGAS Aspar Team) completing the podium.

It was as you were when the race got underway as far as the top two was concerned, with Dixon leading Inde GASGAS Aspar team-mate Albert Arenas into the first corner, but drama hit early for Sam Lowes (Elf Marc VDS Racing Team) as he ran well wide. Alonso Lopez (MB Conveyers Speed Up), however, had launched well from fifth on the grid before passing Arenas for second at De Strubben and then Dixon for first at Stekkenwal. Marcel Schrötter (Liqui Moly Intact GP) moved into third when he passed Arenas at the Geert Timmer Chicane on Lap 4, in what was something of a breakaway quartet at the head of the field.

However, Fernandez reeled them in and he gladly took fourth position when Arenas made a small error at De Strubben on Lap 5. Then, just up the road at De Bult, Schrötter picked off Dixon to move into second position and Arenas got back ahead of Fernandez, as home hero Bo Bendsneyder (Pertamina Mandalika SAG Team) lurked in sixth spot.

Arenas got back into the podium places when he overtook Dixon at the Timmer Chicane on Lap 7, before Schrötter hit the front for the first time when he got past Lopez as they ran down the back straight on Lap 8. Fernandez passed Dixon for fourth at De Strubben on Lap 9, before Lopez ceded second position to Arenas and third to Fernandez on a ragged 10th lap of the race.

Schrötter looked like he might finally break through for his first Grand Prix victory until disaster struck for the German on Lap 12, when he crashed out at De Strubben and handed the lead to Arenas. On Lap 13, Lopez re-passed Fernandez at the Timmer Chicane, but the German GP winner prised second position back from the man on the Boscoscuro on Lap 15.

Meanwhile, Vietti and Ogura, who started the race as the top two in the Championship, were closing in on the lead group as they battled over eighth position. Both were on a comeback after tough starts to the race, Vietti having only qualified 11th before finding himself even further away from the top 10 in the opening corners, and Ogura having two big rear end moments within the first handful of laps which had dumped the Japanese rider as far back as 16th.

Lopez dropped three positions to sixth when he ran wide exiting Haarbocht on Lap 16, promoting Dixon to the podium places again, as Vietti received a track limits warning. What would turn out to be the decisive lead change came on Lap 17 when Fernandez went underneath Arenas at De Strubben, while Bendsneyder sent the Dutch crowd wild when he passed Dixon for third just behind them. Unfortunately for the rider from Rotterdam, he undid his good work with a slow run off the Timmer Chicane at the end of the lap. He was picked off by not only Dixon, but also Cameron Beaubier (American Racing), who got ahead of both of them.

Dixon re-passed Beaubier moments later at De Strubben, and signalled to the American that they should work together to catch the top two of Fernandez and Arenas, who had taken advantage of the battle for third place to skip several tenths of a second clear. They did just that, as Ogura finally moved back into the top five with a pass on Bendsneyder at the start of Lap 19, which opened the door for Vietti to follow him through.

Ogura’s progress continued when he got through on Beaubier at De Strubben on Lap 20, while Dixon took second place from Arenas at the Timmer Chicane on that same lap. At the start of Lap 21, Beaubier crashed out of fifth position as he came under big pressure from Vietti, and Ogura was then into the top three – 13 positions higher than he had been when he nearly got chucked off his bike for the second time – by passing Arenas.

The Japanese rider went down the inside of Dixon for second position as they turned into Haarbocht on Lap 22, and Arenas got back in front of the Briton at the Timmer Chicane. Dixon got him back at the start of Lap 23, though, and Arenas was out of the race altogether when he dropped it at De Bult. That crash promoted Vietti to fourth, behind a top three of Fernandez, Ogura, and Dixon, and that is how they would finish – all within a second of each other – after an astonishing Dutch GP for the Moto2™ field.

That’s it for another thrilling Assen weekend for the Moto2™ field. After the summer break, we’re back in action at the Monster Energy British Grand Prix, so join us at Silverstone for more!

Augusto Fernandez: “It was a really hard race, I really enjoyed that one but it was tough at the beginning to overtake those guys, we were a big group and it was very difficult to pull away, so I decided to stay in the group and wait for my moment to come, and yeah, in the end, step-by-step I was overtaking rider-by-rider, without getting any stress and in the end when I found myself in first position I tried to make my pace. I made a couple mistakes in the first laps when I was leading. There was some wind in sector 4 so it was easy to make mistakes, but once I knew the pace I could do I put some good laps in a row and it was enough!”