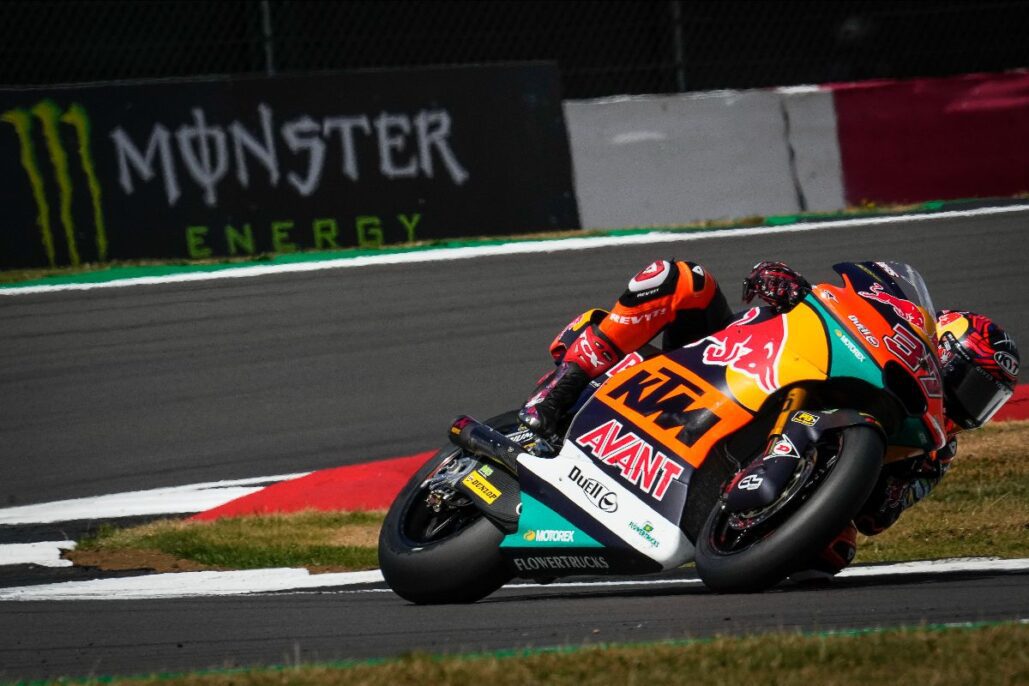 The two set out two very competitive stalls on Friday as track action gets underway in the UK.

It was almost a two-man show in Moto2™ on Friday at the Monster Energy British Grand Prix, with Augusto Fernandez (Red Bull KTM Ajo) and home hero Jake Dixon (GASGAS Aspar Team) duelling it out on the top of the timesheets in both sessions and in their own postcode. The Spaniard took it in the end to end Friday fastest, with Dixon 0.187 back before a 0.369 gap back to another impressive performance from Alonso Lopez (CAG Speed Up).

FP1
Fernandez picked up where he left off for much of FP1, the Spaniard over six tenths clear until late on and a late attack from Dixon. The Brit then took over on top as he pipped Fernandez by 0.066, with the two four full tenths ahead of Aron Canet (Flexbox HP 40) in third. Lopez continued his impressive form to take fourth, ahead of Joe Roberts (Italtrans Racing Team) and Ai Ogura (Idemitsu Honda Team Asia).

The drama for Moto2™ came both on track and off. First, Pedro Acosta (Red Bull KTM Ajo) was declared unfit for the Grand Prix as his fractured femur continues to heal, and then, after a crash in FP1, Sam Lowes (Elf Marc VDS Racing Team) was sidelined from the event early. The Brit dislocated his shoulder and was declared unfit for Silverstone.

FP2 + Provisional Q2 places
It was a role reversal in FP2 as Fernandez returned to the top, but Dixon was once again his main challenger as the two enjoyed some gap at the top. Lopez marched even further forward, and there was a splash of drama for Canet as he tumbled out, rider ok.

Tony Arbolino (Elf Marc VDS Racing Team) shot up into fourth by the end of play, with Albert Arenas (GASGAS Aspar Team) taking P5 on Day 1. Filip Salač (Gresini Racing Moto2) slotted into an impressive sixth, getting the better of Ogura. Cameron Beaubier (American Racing) was next up ahead of a much improved afternoon from Vietti as the Italian took P9, gaining nine places. Marcel Schrötter (Liqui Moly Intact GP) completed the top ten.

As it stands, Bo Bendsneyder (Pertamina Mandalika SAG Team), Roberts, Canet and Fermin Aldeguer (CAG Speed Up) stand to move through to Q2 – so there’s plenty on the line in FP3. Tune in for that from 10:55 (GMT+1) before qualifying from 15:10!