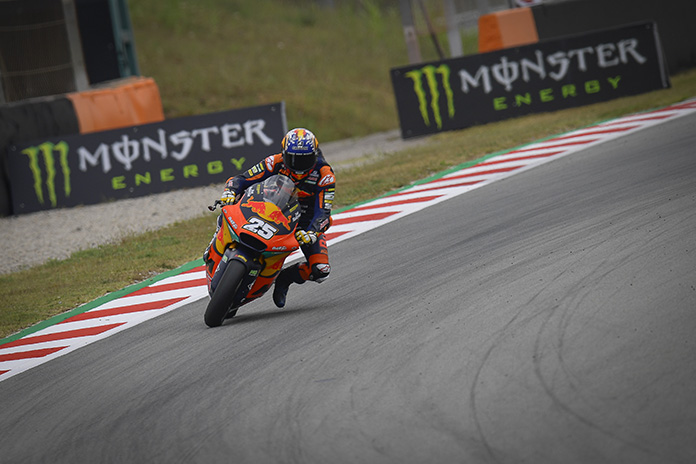 FP1
The morning belonged to Elf Marc VDS Racing Team as they locked out at the top in the intermediate class. Augusto Fernandez headed teammate Sam Lowes by a tenth and a half, with man of the moment Gardner just 0.003 further back in third place. His teammate, rookie Raul Fernandez, ended FP1 just 0.048 off the Aussie, with Marco Bezzecchi (Sky Racing Team VR46) completing the top five.

Keminth Kubo ( VR46 Master Camp Team) was the only faller, rider ok. Barry Baltus (NTS RW Racing GP) didn’t crash, but the Belgian did put in one of the greatest saves of the season so far.

FP2
Raul Fernandez struck back in the afternoon, taking to the top late on and deposing teammate Gardner after the Australian led the session for the majority. Lowes and Augusto Fernandez took third and fourth, respectively, with Xavi Vierge (Petronas Sprinta Racing) fifth quickest on home turf.

Barry Baltus did take a tumble at Turn 4 in the afternoon, and headed for the medical centre for a check up.

Combined timesheets
Raul Fernandez’ FP2 best puts him top from Augusto Fernandez’ FP1 time, with 0.016 between the two. Lowes is in third ahead of Gardner, with Bezzecchi’s FP1 fastest taking the last place in the top five.