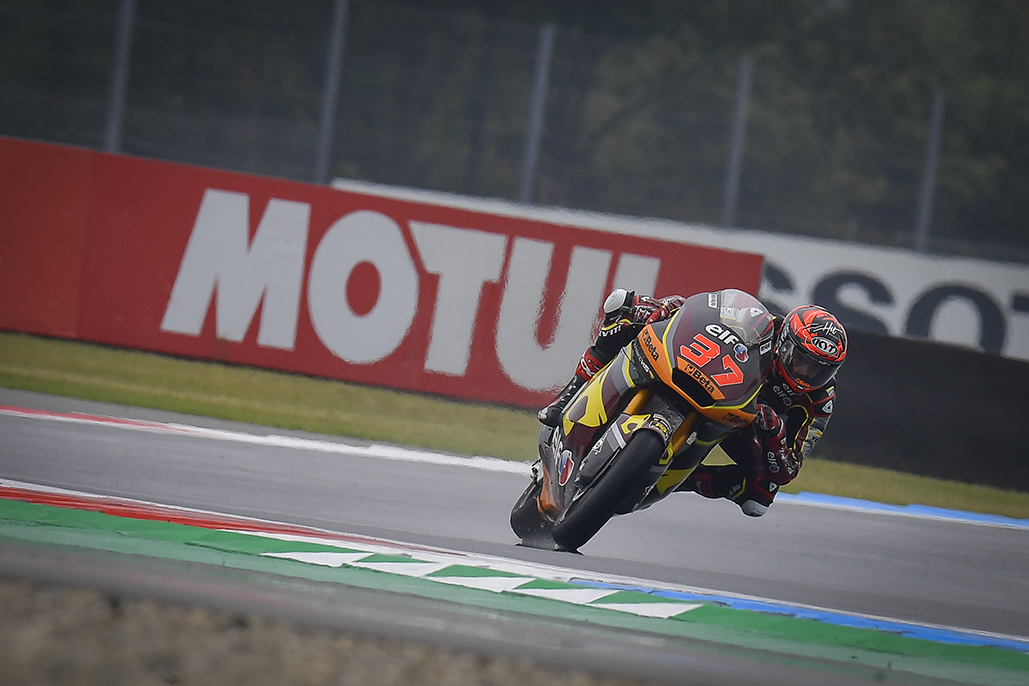 Augusto beats Raul to the top, with Gardner a few tenths down in third on Day 1 at Assen.

Augusto Fernandez (Elf Marc VDS Racing Team) took to the top on Day 1 of the Motul TT Assen, the Spaniard quickest in the morning as he put together an impressive run of fast laps and then proving quick again in the afternoon in the rain, 0.034 off the top. The combined timesheets come from FP1 however, so it’s Raul Fernandez (Red Bull KTM Ajo) second quickest overall and his teammate, Championship leader Remy Gardner, completing the top three on Friday.

FP1
Augusto Fernandez was absolutely flying in FP1, the 2019 Assen winner quickest for the latter half of the session and only going faster and faster. He was 0.143 clear of Raul Fernandez by the flag, the latter Fernandez gaining ground but not enough. Championship leader Gardner was third quickest, but 0.388 off the top.

Jorge Navarro (+Ego Speed Up) and Simone Corsi (MV Agusta Forward Racing) completed the top five.¡ after solid starts to the weekend for both.

FP2
The afternoon was affected by the aforementioned rain, with the track drying but not reaching fully dry by the flag. Hector Garzo (Flexbox HP 40) was quickest as he struck late, denying Augusto Fernandez by 0.034. Nicolo Bulega (Federal Oil Gresini Moto2) was third, half a second off the top, with Aron Canet (Aspar Team Moto2), Joe Roberts (Italtrans Racing Team) and Sam Lowes (Elf Marc VDS Racing Team) for close company, the gap half a tenth between each.

Tony Arbolino (Liqui Moly Intact GP), Sam Lowes and Aron Canet round out the fastest 14 and are therefore the riders currently set to move straight through to Q2, but FP3 offers another strike on Saturday morning… weather permitting. That kicks off at 10:55 (GMT +2), before qualifying from 15:10. Don’t miss it!