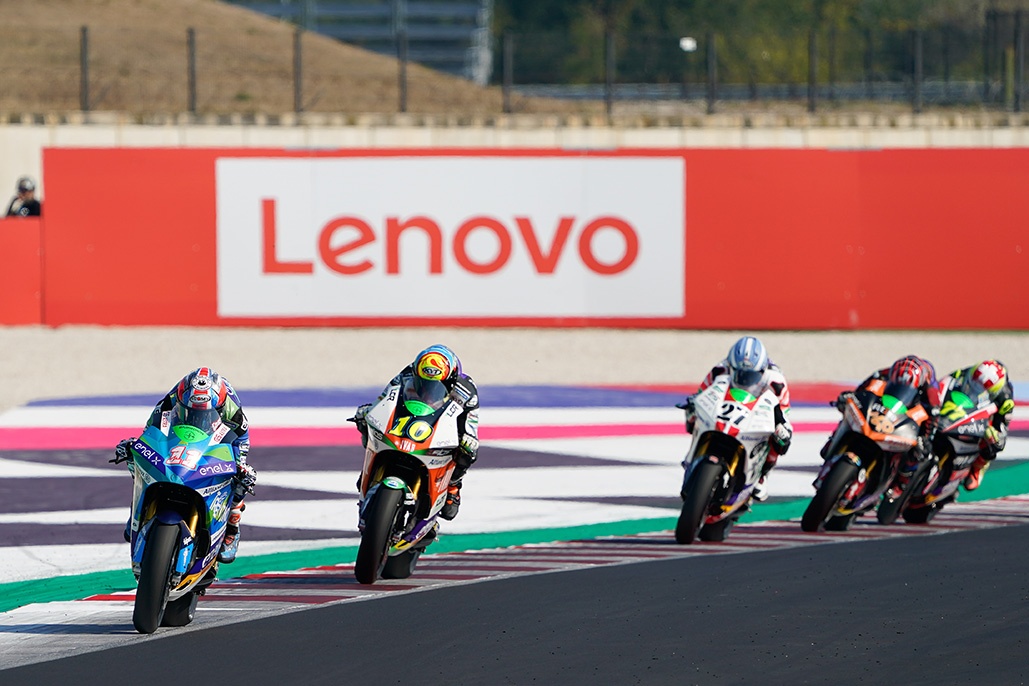 The Italian wins his first FIM Enel MotoE™ World Cup race of the season on home turf, ahead of Simeon and Aegerter.

Polesitter Mattia Casadei (Ongetta SIC58 Squadracorse) grabbed the holeshot after a great start on home soil and soon got into a good rhythm, with Simeon going around the outside of Lukas Tulovic (Tech3 E-Racing) at Turn 1 and into Turn 2 to grab P2. It was a clean opening sector for everyone, but then Turn 8 saw Josh Hook (Octo Pramac MotoE) run off track, before numerous riders – including Tulovic – got Turn 13 all sorts of wrong. Tulovic dropped to outside the top 10, with leader Casadei left enjoying a half-second advantage on the opening lap.

However, the Italian was soon reeled in by Simeon and the chasing pack. On Lap 2, we had a five-rider battle for the lead. Casadei, Simeon, Ferrari, Jordi Torres (Pons Racing 40) and standings leader Aegerter were about to get into a phenomenal ding-dong MotoE™ battle. Ferrari was past Simeon into Turn 8 after Aegerter had set the fastest lap on Lap 3, with the swapping and changing then allowing Mike Di Meglio (EG 0,0 Marc VDS) to catch the group to make it a 12-wheel fight for victory.

Di Meglio soon made his move on Aegerter to shove the Swiss rider down to P6 with three laps to go, as Ferrari then started closing in on leader Casadei. Lap 5 saw the number 11 get a great run out of Turn 10 and the Italian dived up the inside of his compatriot into the rapid right-hander of Turn 11, with Simeon then pouncing on Casadei at Turn 2 with two laps to go to boot. At that point, Ferrari had a half-second lead over the chasing five riders…

Heading onto the last lap, Simeon had closed Ferrari down slightly, the gap at three tenths, and Aegerter had got back past Di Meglio. The Andalucia GP winner was also up the inside of Torres for P4 at Turn 10, but Ferrari was holding firm at the front and looked set to gain a chunk of points. Heading into the tight and technical Turn 14 – an overtaking hotspot – Simeon wasn’t close enough to make a clean lunge on the race leader and that seemed that, but Aegerter was at least able to pounce for the podium. The number 77 sliced up the inside of Casadei at Turn 14, with Torres following him through as well…

No one could stop Ferrari from taking the 25-point haul, however, a first win of the campaign coming in style – although Simeon crossed the line just 0.213 behind for his first MotoE™ podium since Austria 2019. Aegerter’s stunning final lap sees him keep a healthy lead in the standings, with Ferrari moving to within 12 of the Swiss rider. Torres’ P4 was another great result for the rookie who is now 14 adrift of Aegerter in the standings, with Casadei dropping to P5 from pole and the early race lead.

Di Meglio crossed the line in P6 to see the top six finish just 0.7 seconds apart in a truly epic MotoE™ encounter. 3.6 seconds behind the lead battle was another cracking fight, with Alessandro Zaccone (Trentino Gresini MotoE) leading those riders over the line for his first points of the season. Alex de Angelis (Octo Pramac MotoE) recovered well to eighth after starting P16, the Sammarinese star less than a tenth shy of Zaccone. Tommaso Marcon (Tech3 E-Racing) beat Eric Granado (Avintia Esponsorama Racing) to ninth as the duo rounded out the top 10, the latter doing well to climb into that top 10 after starting from the back of the grid. A title favourite, he will be hoping to bounce back and be in the fight for victory at the double-header at Misano next weekend.

Another awesome MotoE™ race ends with Ferrari on top in Italy. Two races follow next weekend for the electric, can the king of Misano be dethroned? Tune in to find out!

Matteo Ferrari: “The feeling of winning here again is incredible. After Jerez it as difficult to try and keep focused on the Championship, on the bike, we worked a lot at home and we arrived here with a lot of pressure because last year we won twice. But we did a great job. On the first lap it was difficult, Mattia went very fast in the first three laps, and after that the tyres went down a bit and I had to manage it… but you know MotoE races are very short; you have to stay focused and not make mistakes. I did that and won, and I’m really happy!”
[wptb id=65242]
[wptb id=64599]