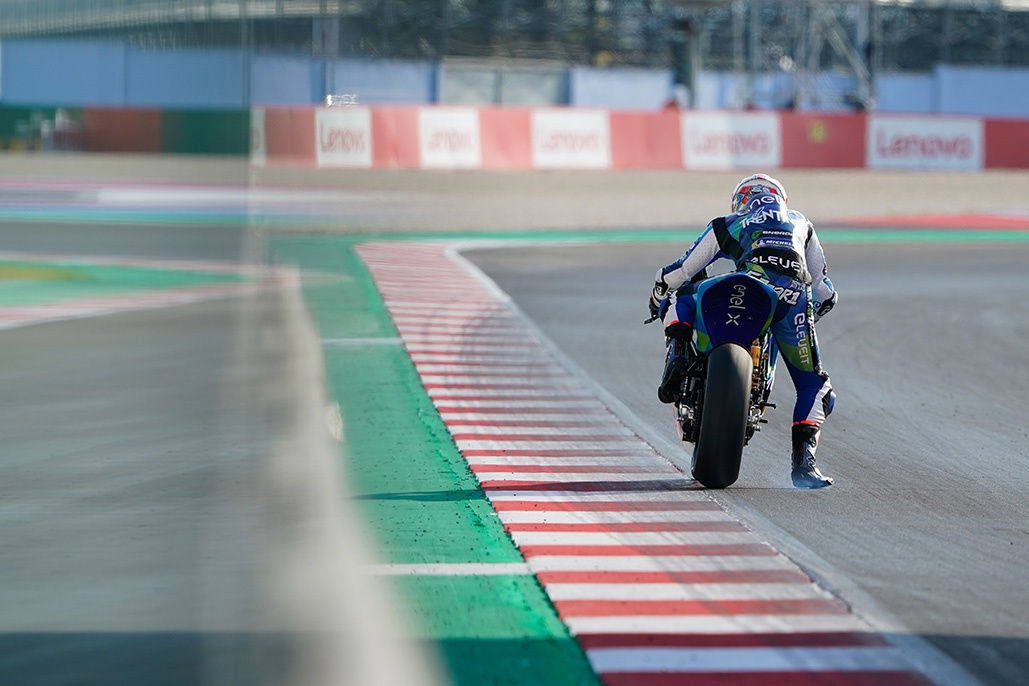 The reigning Cup winner takes the FIM Enel MotoE™ World Cup Saturday spoils for the first time – but will start from Row 2.

There was a lot to smile about for some of the home heroes after FIM Enel MotoE™ World Cup E-Pole at the Gran Premio Lenovo di San Marino e della Riviera di Rimini, with Matteo Ferrari (Trentino Gresini MotoE) taking his very first E-Pole after snatching the honour from compatriot Mattia Casadei (Ongetta SIC58 Squadra Corse). The 2019 Cup winner and Misano victor won’t start from the front, however, with Casadei promoted to P1 as Ferrari serves a three-place grid penalty for his crash with Eric Granado (Avintia Esponsorama Racing) in Jerez. Third fastest in E-Pole was Xavier Simeon (LCR E-Team) as he pipped rookie Lukas Tulovic (Tech 3 E-Racing), but the German will move up to start alongside the Belgian on the front row.

The story of the day – as well as the polesetter, front row and penalty on the way – was a difficult E-Pole for Eric Granado as the Brazilian ran afoul of track limits and had his lap cancelled. He’ll therefore start from the back, and will be one to watch as he tries to move forward in the short dash of a MotoE™ race that awaits.

That drama came late as the runners headed out in the order set by their Free Practice times – with the fastest going last – creating plenty of stories throughout the field. Dominique Aegerter (Dynavolt Intact GP) wasn’t quite able to replicate his Jerez form, last year’s E-Pole winner Alex de Angelis (Octo Pramac MotoE) had a few big moments on his lap, and injury comeback kid Niki Tuuli (Avant Ajo MotoE) showed some solid signs before losing his advantage in the final sector . On Sunday, then, we can expect another incredible spectacle…

Behind the Casadei, Simeon, Tulovic front row, Ferrari will start fourth with Aegerter alongside him. Niccolo Canepa (LCR E-Team) completes that second row after a solid performance from the Italian on Saturday; the number 7 just hundredths off the Swiss rider ahead of him on the timesheets. Rookie and second in the Cup standings Jordi Torres (Pons Racing 40) heads the third row, ahead of a big leap forward for Tommaso Marcon (Tech 3 E-Racing) at Misano as he regains full fitness. The gap between the two was only 0.007!

Mike Di Meglio (EG 0,0 Marc VDS) took P9 as he looks for more in 2020, ahead of home hero Alessando Zaccone (Trentino Gresini MotoE), who completes the top ten. The Italian denied Tuuli the honour by just 0.010.

Keep an eye on those a little further back, too. After a dramatic start to his lap losing him time, Sammarinese rider de Angelis finds himself languishing in 16th and looking to move forward, and that couldn’t be more true for Granado either. The Brazilian is the rear gunner on the grid after having his laptime cancelled for exceeding track limits, but he’s had some serious pace at Misano. What can he do in the race?

That’s it from Saturday, make sure to tune into the third MotoE™ race of 2020 at 10:05 local time (GMT+2), with plenty to look out for. As ever, it looks set to be another thriller!

Matteo Ferrari: “Before this weekend, the penalty for me was a motivation because I was second three times in E-Pole, so in my home GP I wanted pole… and I did it! I’m very happy because during this weekend we’ve tried a new setup. In Jerez we were fast but not compared to first, and we’ve changed the bike a lot and found another way, and for that reason I was fast in E-Pole and in Free Practice.”