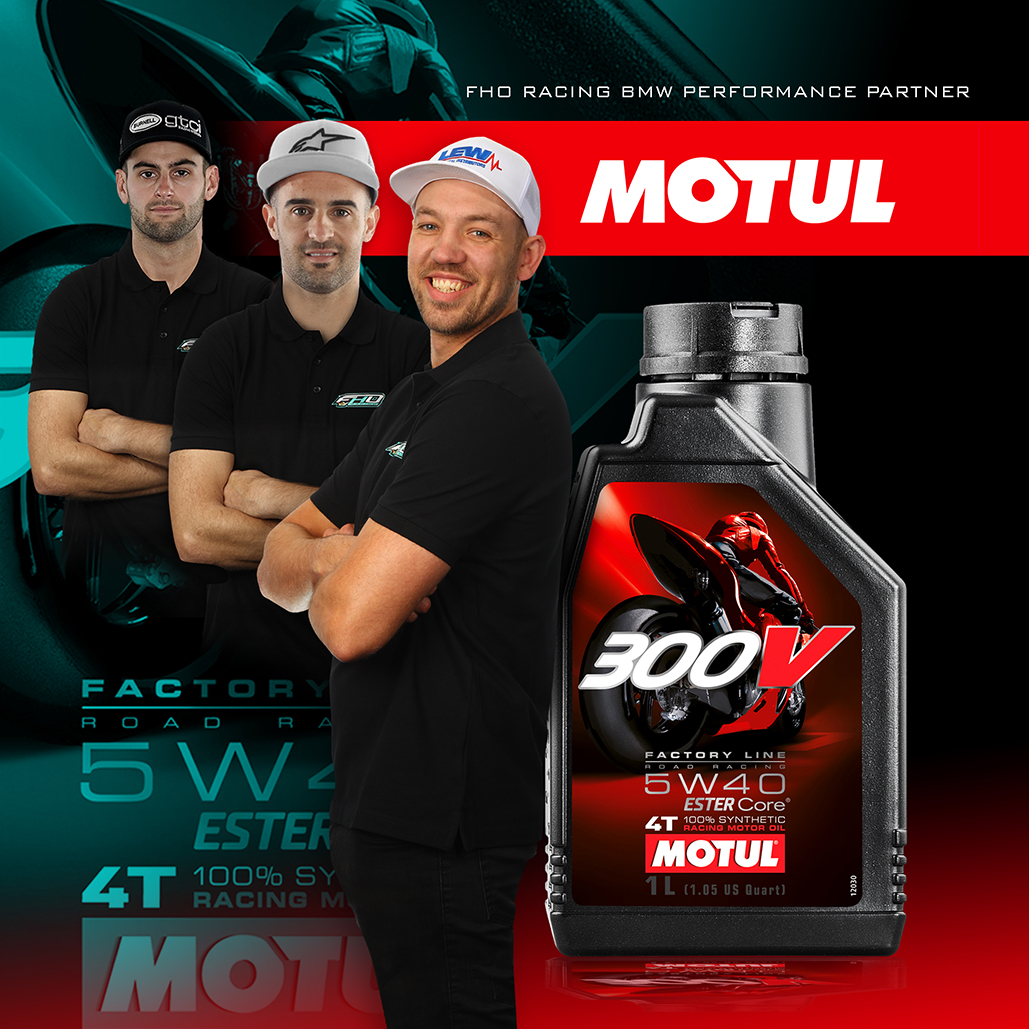 MOTUL is proud to announce a new partnership with FHO Racing.

Whilst newly formed, this racing team has a powerful motorcycling pedigree, and has united with MOTUL to take on the BSB Championship and international road races across 2021.

FHO Racing is an exciting new three-rider, BMW Motorrad-supported team created by Macau entrepreneur Faye Ho. The new team is formed from the foundations of the successful Smiths Racing operation.

The FHO Racing BMW Team will rely on MOTUL’s Factory Line of specialist products including 300V, the engine oil specially formulated for racing applications providing maximum output while preserving the reliability of the engines for endurance races. This partnership will be crucial as the team develop their 2021 BMW M 1000 RR machine for both the Bennetts British Superbike Championship and the International Road Races.
The power of partnership…

Richard Barrett, MOTUL UK Senior Brand Manager says, “What better way to celebrate 50 years of 300V. Everyone at MOTUL are really excited to be working with FHO Racing. With Peter, Xavi and Alex, the team have a fantastic rider line-up to take on the roads and short circuits of the BSB.

2021 is a landmark year for MOTUL as we celebrate 50 years of 300V. Like our racing partners we strive to improve every year and I can’t wait to see FHO racing testing our market leading lubricants next year and beyond.”

FHO Racing BMW Team Manager Darren Jones
“We’re proud to have such an iconic brand as MOTUL on board for 2021 supporting us for BSB and all the International roads events. We need products which gives us performance, reliability and longevity and MOTUL do just that. They are a major player at the highest levels of Motorsport, so I’m confident that we will have some great success together.”

Peter Hickman
“I’m really excited to be involved with such an iconic brand as MOTUL both as a partner for the team and as an ambassador for them myself. They are the benchmark in their field around the globe in so many motorsports. I’m looking forward to working closely with the UK and French side of the business and getting going in testing.”

ABOUT MOTUL
MOTUL is a world-class French company specialised in the formulation, production and distribution of high-tech engine lubricants (two-wheelers, cars and other vehicles) as well as lubricants for industry via its MOTUL Tech activity.

Unanimously recognised for more than 150 years for the quality of its products, innovation capacity and involvement in the field of competition, MOTUL is also recognised as a specialist in synthetic lubricants. As early as 1971, MOTUL was the first lubricant manufacturer to pioneer the formulation of a 100% synthetic lubricant, issued from the aeronautical industry, making use of esters technology: 300V lubricant.

MOTUL is a partner to many manufacturers and racing teams in order to further their technological development in motorsports. It has invested in many international competitions as an official supplier for teams in: Road racing, Trials, Enduro, Endurance, Superbike, Supercross, Rallycross, World GT1, 24 Hours of Le Mans (cars and motorcycles), 24 Hours of Spa, Le Mans Series, Andros Trophy, Paris-Dakar, 8 Hours of Suzuka, Bol d’Or, Daytona 200-mile motorcycle race