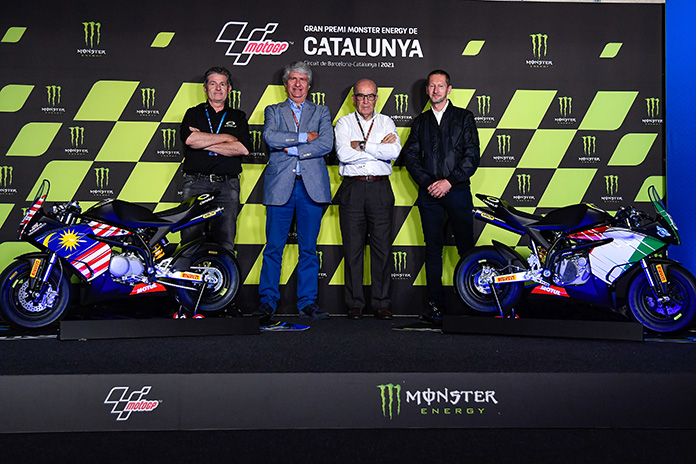 As the newest path on the Road to MotoGP™ gets in gear, the new FIM MiniGP World Series was formally presented in a special Press Conference at the Circuit de Barcelona-Catalunya on Saturday. FIM President Jorge Viegas and Dorna Sports CEO Carmelo Ezpeleta unveiled the new project, joined by Ohvale CEO Valerio Da Lio and Pirelli Motorcycle Racing Department’s Wayne Doran on stage. MOTUL was also presented as a new partner of the project, offering top quality lubricants to FIM MiniGP World Series competitions and competitors.

The FIM MiniGP World Series is designed to unify and standardise MiniGP competitions from around the world under the same umbrella, aiming to create an equal platform for young riders worldwide to increase their skill and opportunity. Federations and CONUs (continental unions) from around the world can apply to be part of the series.

The top three riders in each national, regional or continental 2021 competition will be invited to compete in the World Final in Valencia ahead of the Gran Premio Motul de la Comunitat Valenciana. The winner of the World Final, subject to age and location/nationality, will secure a spot in one of the Road To MotoGP™ programmes on the next rung of their career ladder.

FIM President Jorge Viegas and Dorna CEO Carmelo Ezpeleta both opened the Press Conference presenting the project, before two of the OHVALE GP-0 160 bikes to be raced in the final in Valencia were then unveiled. One of the display machines was in Italian colours, set to be raced by the top competitors emerging from the 2021 FIM MiniGP Italy Series, and one sported a Malaysian livery for the top three from the FIM MiniGP Malaysia Series.

Italy and Malaysia are just two of the first seven competitions included in the new series that were revealed in April, alongside France, the Netherlands, North America, Spain and the UK. Now, another five competitions can also be confirmed as part of the project: Alpe Adria, Indonesia, Ireland, Portugal and Qatar. The FIM MiniGP Qatar Series begins in late 2021, and will therefore be the first Cup to be included in the 2022 FIM MiniGP World Series.

FIM President Jorge Viegas: “One of the main objectives in my mandate is to allow all the young girls and boys that want to race in motorcycling to have this possibility, regardless their financial condition. The FIM MiniGP World Series is the first step on the Road to MotoGP, with very limited costs and in a safe environment. Furthermore, this project implicates directly the National Federations and the Continental Unions, and this is extremely important for its success. I want to thank Dorna, with whom we have been working for a long time on this project, for the fantastic collaboration, and also our partners Ohvale, Pirelli and Motul.”

Dorna CEO Carmelo Ezpeleta: “This is a project we started to study a long time ago; how to establish the base of the pyramid on the Road to MotoGP. We have the Red Bull MotoGP Rookies Cup, the FIM CEV Repsol, Idemitsu Asia Talent Cup, Northern Talent Cup, Honda British Talent Cup and many programmes on the Road to MotoGP, but the base of the pyramid is important to manage to get a lot of people racing, and in the same competitive conditions. For us this has been important from the beginning, to give the opportunity young riders to race with the same material and possibilities. I want to thank the FIM, and Ohvale and Pirelli, as well as Motul as they have recently joined us as a partner of the series.

“It’s a big collaboration, as it has always been since 1992, with the FIM, but also with the National Federations and Continental Unions. I think to involve the federations in a worldwide project is something important and this gives us the chance to do that. This project will become more and more important, for us it’s an important step and the base of the pyramid. I’m sure there will be many young riders who can test their skills racing in correct conditions: on circuits approved by the FIM, who have safety measures in place to ensure the same high level of safety as in all of our Championships. For us, this is very important.”