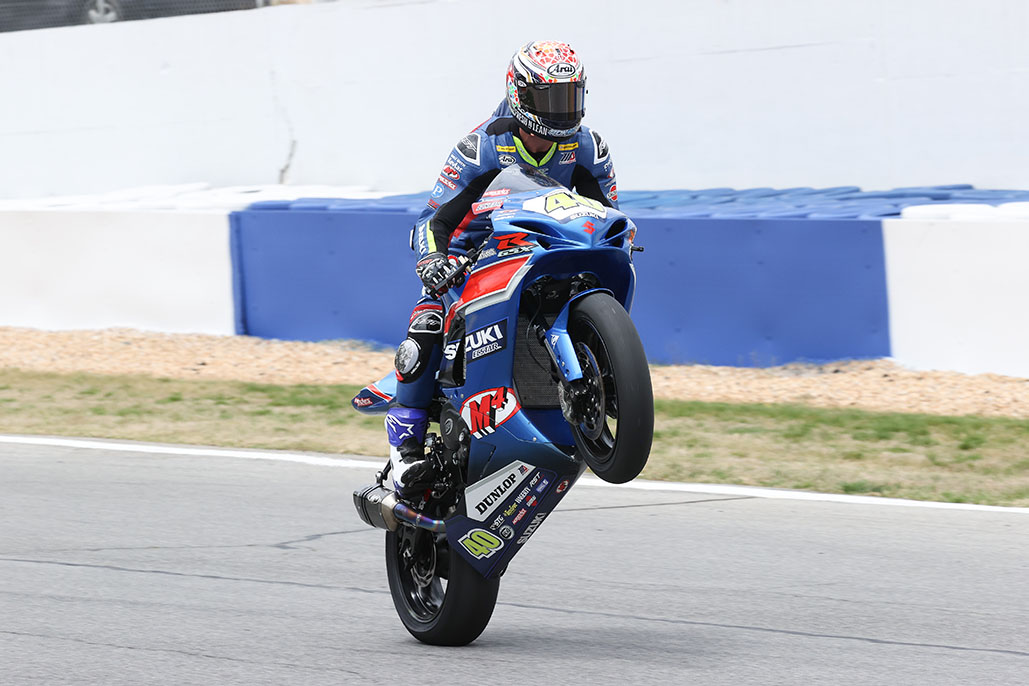 Sunday was a day of first-time winners at Michelin Raceway Road Atlanta with Ben Gloddy and Teagg Hobbs joining HONOS Superbike winner Jake Gagne in winning their first MotoAmerica races on a sunny Sunday in Georgia.

After finishing on the podium eight times last year, Gloddy finally took to the top step with a hard-fought win in the SportbikeTrackGear.com Junior Cup race at Road Atlanta today. Hobbs, meanwhile, had also never made it to the top step of a MotoAmerica race until taking victory in the Twins Cup on Sunday.

In SportbikeTrackGear.com Junior Cup, Ben Gloddy finally broke through with the race win that he’s been coveting for the past couple of years. A frequent visitor to the podium, but never on the top step, Gloddy, who races a Kawasaki for Landers Racing, took the checkers in Sunday’s race two by a scant .127 of a second over Scott Powersports KTM rider Tyler Scott. Third place on Sunday went to KERmoto Kawasaki’s Cody Wyman.

“It was good to get the monkey off the back,” Gloddy said. “Last year, we were finishing third. I think I finished third eighth times last year. Yesterday, we put it in second and the goal after that was just to keep making progress forward. We were able to do that today and get on the top step of the box. Me and Tyler (Scott) pulled a little bit of a gap there in the middle of the race. I was kind of hoping for me and Tyler’s sake, it would be me and him out front, but we got caught by that group again, and I was just trying to stay as far in front of that group as I could and not get tossed too far back. Doing that, I was able to draft Tyler down the back straightaway and cut him off in the last corner, so I was able to get the win.”

King Of The Baggers: The King Is Back

Round one of the Mission King Of The Baggers Championship featured an exciting battle at the front between Mission Foods S&S Cycle Indian Challenger rider Tyler O’Hara, who was last year’s King Of The Baggers invitational winner, and MotoAmerica Superbike rider Kyle Wyman, who was aboard his Screamin’ Eagle Harley-Davidson Road Glide Special. O’Hara and Wyman each took turns at the front with Wyman getting the holeshot and leading the race until lap five when O’Hara took the lead and, ultimately, the checkers.

At the stripe, O’Hara’s margin of victory over Wyman was just under half a second. Meanwhile, third place went to Frankie Garcia, who raced his Roland Sands Design Indian Challenger to his second consecutive King Of The Baggers podium finish.

“Kyle (Wyman) is riding awesome,” O’Hara said of the newest addition to the King Of The Baggers rider lineup. “To have that full factory effort coming in here, it’s an awesome challenge. I love a challenge, and I think it’s great for the sport and it’s just going to elevate both of our programs, and our bikes are just going to get better and better. So definitely it’s good to have. Hopefully, we can get some more bikes. The Indian Challenger, you can go out and buy it and basically get all the parts that I’m running on my bike and come out and race. I’m looking forward to getting more bikes on the grid, but for sure there’s definitely more of a challenge this year.”

Supersport: Kelly Does The Double

The first double race winner of 2021 is M4 ECSTAR Suzuki’s Sean Dylan Kelly, who completed a perfect weekend in the Supersport class by earning the pole and winning both Saturday’s race one and Sunday’s race two. Defending class champion Richie Escalante salvaged what started out as a rough weekend when he crashed and destroyed his 2021 HONOS Kawasaki and had to race his 2020 bike in both Supersport events. Escalante made the best of the situation and finished second to Kelly on Saturday and again on Sunday. Class rookie Rocco Landers emerged on Sunday with a third-place finish after surviving a last-turn skirmish for the final podium spot.

“I have to be very, very proud of the work and very happy with this weekend,” Kelly said. “Honestly, it’s been a tough road ever since the 2020 season. We already know how Richie was from the start of last year. It was definitely tough for me throughout the year and then throughout the off-season. I’ve just been really focused on my work, focused on what we have to improve. It’s been big teamwork between working on myself, working with the team. They made huge steps. I made huge steps. Our package is just much better, and here’s the results. We came in really well this weekend. I just focused on being better in the end of the races. That’s where we struggled last year. Here’s the result. I wasn’t expecting a pole position yesterday, but we got that. The pace in yesterday’s race was really, really good. We focused on some improvements for today. I didn’t go any faster in the race, but I think just certain things were a little different out there but still my pace was just as good. Really happy with my consistency with the gap that we made to second. Overall, just very proud of all the work. I just want to thank my whole team, thank my sponsors and everyone who was behind me, supporting me, and believing in me. We’re just going to keep on working. We have a long way to go. We’re just going to keep on going with this focus and go into every weekend working to dominate.”

In Sunday morning’s Stock 1000 race two, the middle Wyman brother Travis rode his Travis Wyman Racing BMW to victory one day after finishing third in race one. Wyman caught up to and overtook early race leader Geoff May, who finished second aboard his Geoff May Racing/VisionWheel.com Honda. Meanwhile, Jones Honda rider Ashton Yates rounded out the podium after finishing second in Saturday’s race one.

“I still didn’t get a very good start,” Wyman said. “But we made a pretty good change last night. We kind of gambled on something in the warmup to get a little bit more grip out of the bike in the long term, and we did. We improved it, for sure. But really the biggest change today was just getting through the pack of riders. Jake (Lewis) kind of really gave me an advantage. He hit a false neutral there or something. So, when I got out front and I had a little bit of a gap, I knew that I could click off some laps to catch Geoff (May), but it definitely wasn’t easy. I was pushing really hard. I was seeing 27 flat, 27 flat on my timer, and I wasn’t really making up a lot of ground. But I could tell that Geoff was struggling a little bit and the tire was starting to fall off. I think mine just held on a little bit longer. Towards the end of the race, I was able to close the gap. Definitely got to give it to my crew chief, Steve, for making that adjustment this morning to our rear end.”

Twins Cup: Hobbs Gets His First

Saturday’s Twins Cup race one winner Kaleb De Keyrel crashed his Robem Engineering Aprilia in Sunday’s race two, and the incident unfortunately also collected his teammate Hayden Schultz, who finished third on Saturday, along with two other teammates and Saturday second-place finisher Jody Barry. All told, four Aprilia riders were caught up in the incident, and thankfully none of the five were seriously injured. The race was red flagged, but none of the Aprilia riders who crashed were able to make the restart.

As a result, the podium after Sunday’s race two was completely different from Saturday’s race one podium. Polesitter and Innovative Motorsports/Mike’s Imports Suzuki rider Teagg Hobbs escaped the incident completely, restarted the race, and went on to win by just .264 of a second over second-place finisher Trevor Standish aboard his Pure Attitude Racing Suzuki. Third place went to GCP Suzuki’s Chris Parrish.

“Pretty tough weekend,” Hobbs said. “We were P1 almost every session we went out. That was harder for me because that was the most pressure I’ve ever felt. So going into yesterday’s race, we were running all right, then I got the sign for the jump start. I was gutted immediately. I knew I needed to put it past me today before today’s race. Learn from those mistakes. I went into today’s race, and we were running all right. There was a big pack up front. Kaleb went by me on the front straight, and I held my line on the outside of him and all of a sudden, I saw a bunch of smoke and he went backwards. I heard a bunch of noises. I looked back and there were three guys on the ground. Obviously, the red flag came out, and we came in. I thought they’d be back in the race, given how long the cleanup time was. Then I saw the starting grid and these guys were all behind me. I was like, ‘Oh boy. This isn’t going to be an easy one.” Just put my lines down and tried to focus for the race. Off the line I wanted to get a good start and try to lead, but also like Trevor was saying, I didn’t want to lead into turn one. Luckily my start was horrendous. The first few laps were a little hairy into turn one, but I took the lead and I knew I just needed to do whatever I could to stay up front. Trevor was putting a lot of pressure on me. Every time I went by the start/finish I saw on my board ‘plus 0.’ I tried my best to ride the best last few laps I could and finally won one of these things, so I’m stoked. I’ve got a lot of pressure on me now to chase down the points leader going into Virginia. I’m happy for Trevor, happy for Chris.”
For the complete 2021 MotoAmerica Series schedule, click HERE