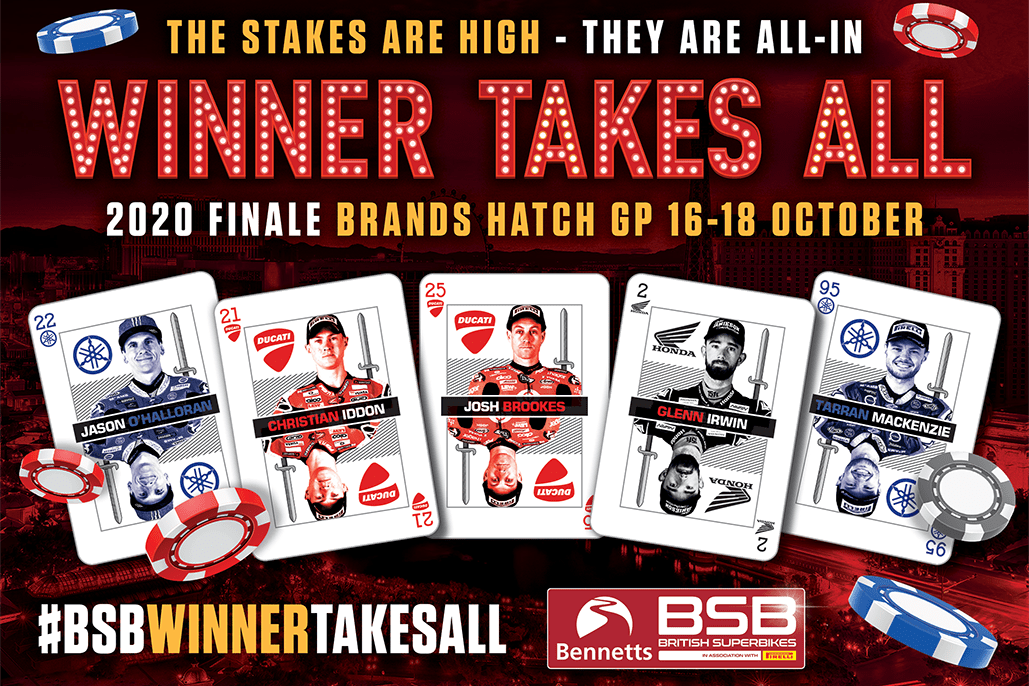 The 2020 Bennetts British Superbike Championship reaches its climax this weekend (October 16/17/18) with five title protagonists taking the battle down to the wire on the Brands Hatch Grand Prix circuit.

At the top of the standings, for the first time this season, is Josh Brookes, ahead of the final three rounds. The 2015 champion seized the advantage following the previous event at Donington Park, where he celebrated a win and two third places to give him a 16-point edge over his closest rival, and teammate, Christian Iddon.

Iddon lines up for the title fight ahead of the triple-header finale for the first time on the second of the VisionTrack Ducatis, as the PBM team bids to add an eighth Bennetts BSB crown to its accomplishments in the series.

However just two-points adrift of Iddon, is Glenn Irwin, who led the title standings right up until the previous meeting after losing ground with a crash in the opening race in the East Midlands. The Honda Racing contender is more than ready to take on his Ducati rivals, bidding to end a sensational debut season for the new CBR1000RR-R Fireblade SP with a title victory.

Glenn Irwin knows that it isn’t just the two riders ahead of him to contend with though. He has just a one-point margin over McAMS Yamaha’s Jason O’Halloran, as both riders chase their first title.

McAMS Yamaha is the third team and manufacturer in with a chance of title glory after the final race of the season at Brands Hatch; and O’Halloran will be keen to regain the ground he lost in the previous event at Donington Park.

Tarran Mackenzie is the joker in the pack; a 46-point deficit to Brookes means he still has an outside chance at the title but knows that the opening race on Saturday could prove pivotal to his chances of a first Bennetts BSB crown.

Whilst the five title contenders are ready to go all-in as they bid for title celebrations after Round 18 on Sunday, there are three other race winners this season who will be determined to mix it at the front. Tommy Bridewell, Kyle Ryde and Andrew Irwin, have all been victorious in 2020, and for the second of the Irwin brothers, he will be pushing to take as many points off Glenn’s rivals to aid Honda Racing’s title bid.

Rapid Fulfillment FS-3 Kawasaki’s Danny Buchan and Lee Jackson have been podium finishers this season and will want to end the year on a high, whilst the BMW contenders including Luke Mossey and Bradley Ray will want to come out of the weekend as the leading rider for the manufacturer after a difficult campaign.

Josh Brookes (VisionTrack Ducati)
Bennetts BSB Championship leader
“I am leading the championship into the final event and that was a nice way to leave Donington Park. Normally I go into Brands Hatch trailing in the points and trying to claw back a desperate chance at the championship, so to go with a lead is a great improvement on years before.

“Strangely enough, having the points lead has taken away a lot of the pressure and I feel quite comfortable going into Brands Hatch. I feel relaxed, which is good and obviously it’s clear I have a very good record around the GP track, so I want that to carry on. I always look forward to racing there and this time is no different.

“I’m sure there will be some great racing but I’m ready for this challenge. I just need to focus on working hard and doing a good job and what will be will be.”

“This year I’ve tried to approach every race race-by-race, lap-by-lap, situation-by-situation and so far it has been pretty good. It’s easier to be the chaser and not the chased so I don’t really care whether I finish second or fifth – it’s the being first against your title rivals that makes the big difference for the championship standings.

“It’s all to play for and it’s always going to be interesting. You never know how you feel on the bike until you swing a leg over on that first free practice and hopefully I’ll have a good feeling. All I ever do is do my best and I feel good about it. I know that when I get a good feeling, like I had at Snetterton, like I had at Oulton Park, that I’ve got all the pace required to do the job in hand.”

Glenn Irwin (Honda Racing)
Bennetts BSB – Third in the standings
“I go into the last round with a lot of hope and the realism that we can be the champion, but I don’t underestimate how difficult of a job that will be. It has been a great year for me regardless and I think we’ve established ourselves as one of the main front runners and that has taken a lot of work.

“I’m just really looking forward to it. I feel confident and happy with what’s underneath me, but I am aware of how difficult a task it will be on one hand, but I’m also aware that we can win the championship as well. Let’s go and enjoy it, get stuck in and try to complete what has been a dream season for the new Fireblade.”

Jason O’Halloran (McAMS Yamaha)
Bennetts BSB – Fourth in the standings
“The points that I scored in the last race at Donington were crucial. We have a little bit more of a point’s deficit now but it is not the end of the world; it’s only 19 points, so it’s still well within reach.

“I like racing at Brands Hatch, I’ve had some really good races there in the past and I’m expecting to be strong. Who knows what’s coming up at the end of October but it’ll be really nice to have three dry races to battle out for the championship between the top guys and see where we end up.

“Obviously, Saturday will be an important day for us to try and beat our competitors and make sure we take the title fight right down to the last race on Sunday, and see if we can manage to lift the trophy on Sunday afternoon.”

Tarran Mackenzie (McAMS Yamaha)
Bennetts BSB – Fifth in the standings
“Being 46 points off is obviously still a long way to be off the championship lead, but it’s almost nice in a way going in with no pressure and just enjoying the last three races.

“I am just going to get the best results I can and then the championship will sort itself out really.

“Going into the last round, Brands Hatch is a track that I’ve been strong at in the past, so there’s no reason why I can’t go and fight for three wins there.”