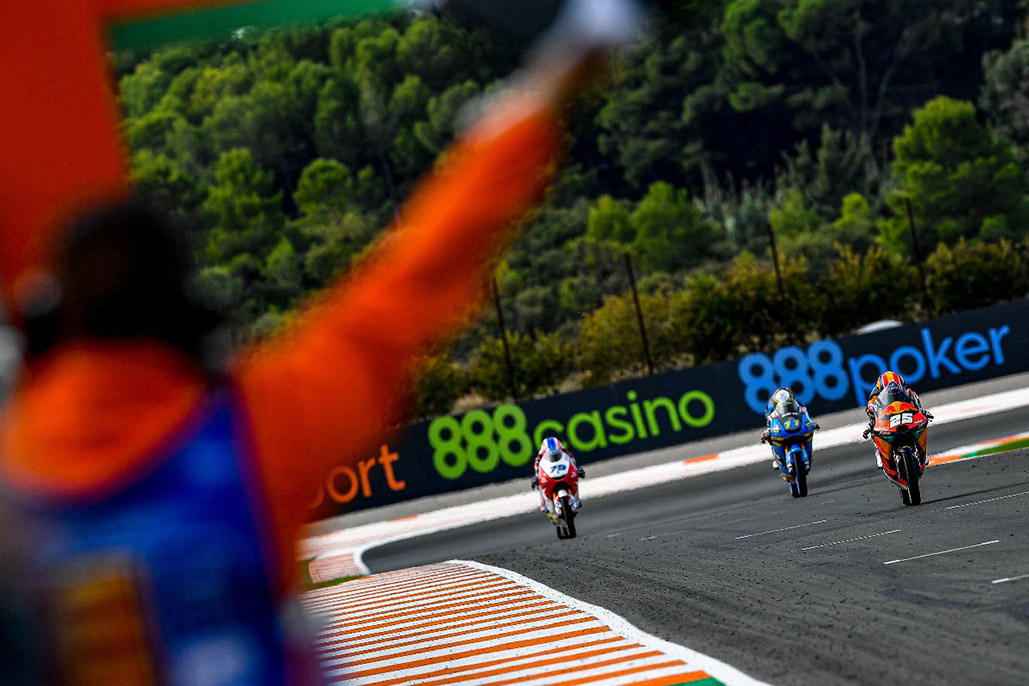 Vietti crashes, McPhee crashes and Arenas ends the day with a 0 – as Ogura gains big with a return to the podium.

Raul Fernandez (Red Bull KTM Ajo) put in a stunner to take the lead early in the Gran Premio de Europa and then pull away, staying calm and collected to take to the top step for the first time in Grand Prix racing. Behind him a three-way battle royale raged on the final lap, with 2019 Valencia GP winner Sergio Garcia (Estrella Galicia 0,0) coming out on top to take second ahead of Ai Ogura (Honda Team Asia). The podium for Ogura boosts him up to within three points of the Championship lead as huge drama ripped through the standings for the majority of the other key contenders.

Celestino Vietti (Sky Racing Team VR46) took the holeshot from the front row as poelsitter John McPhee (Petronas Sprinta Racing) lost out, and early doors there was a group of four heading away… but the drama was quick to hit. First off, a crash for Vietti saw Alonso Lopez (Sterilgarda Max Racing Team) unable to avoid and get tangled up, both going down in the first Championship shockwave as the Italian lost serious ground. The incident also scattered the pack and left Fernandez out front after the Spaniard had taken the lead just before the crash.

The incident also caught Albert Arenas (Valresa Aspar Team Moto3) just enough to cause some damage, which then became apparent as the number 75 was upright but going backwards. Arenas eventually pulled into pitlane at the end of the lap, blowing the title fight wide open once again. And although he did manage to get back out, it was with a significant gap to the front and one that would haunt the Spaniard later.

And so Fernandez led, gassing it to over two seconds clear as the second group battled it out. And then even more drama hit. McPhee crashed out at Turn 1, likely ending his charge for the crown, and only a few laps later, Jaume Masia (Leopard Racing) took a tumble too. That left Arbolino – the man leading the chase to catch Fernandez – and Ogura as the two key challengers near the top, joined by Garcia. And the gap to Fernandez was coming down ever so slightly…

Arbolino, Garcia and Ogura pushed on to catch the Red Bull KTM Ajo machine in the lead, but soon they would have even more to contend with than just the two-second gap to the front as well. Arenas was back out on track and soon the second group were on the scene, creating another little. Things got close and the number 75 was shown the black flag not long after, having got a little too into the battle despite being laps down.

That left Arbolino and Ogura as the two key men with something big to gain. With six to go, Arbolino had got the gap to Fernandez more than just a little below two seconds as Garcia and Ogura duelled just behind the Italian. The countdown was on for Fernandez, although the Spaniard looked solid. could he hang on? He could. Despite some late nerves about a possible bike problem, the Red Bull KTM Ajo rider kept it clean to complete his impeccable day at the office in style: on the top step.

The battle behind went down to the final lap, as ever in Moto3™. Arbolino had a twitch at Turn 1 and Garcia was up the inside of the Italian and into P2. Then Ogura picked Arbolino’s pocket at Turn 6 and the Italian, after a fair bit of leg work to lead the trio throughout, was now off the podium.

Garcia had broken the two title contenders and kept a little breathing space to the line to take his first first podium of the season, bouncing back from some tougher outings. Behind him, the duel stayed close but Ogura kept the door slammed shut at the final corner to get back on the podium for the first time since the Emilia Romagna GP. That cuts the gap in the Championship to just three points, with Arenas’ margin seriously cut.

Arbolino was forced to settle for fourth and remains 23 points down on Arenas, although he did gain, with Vietti’s 0 leaving him only three points ahead of Arbolino. Darryn Binder (CIP – Green Power) had another solid ride to a top finish as the South African came home in fifth, unable to quite get back the ground lost earlier in the race but taking more solid points. Carlos Tatay (Reale Avintia Moto3) duelled the number 40 late on, but was forced to settle for sixth.

The next group up was led over the line by Stefano Nepa (Valresa Aspar Team) as he charged up to seventh, beating Jeremy Alcoba (Kömmerling Gresini Moto3) and Filip Salač (Rivacold Snipers Team). Ayumu Sasaki (Red Bull KTM Tech 3) was next up after storming through from P26 on the grid, with Riccardo Rossi (BOE Skull Rider Facile Energy), Andrea Migno (Sky Racing Team VR46) and Romano Fenati (Sterilharda Max Racing Team) completed that group down to P13 – Fenati having had to take two long laps for track limits. Deniz Öncü (Red Bull KTM Tech 3) wasn’t too far back either, with Gabriel Rodrigo (Kömmerling Gresini Moto3) – another who did a Long Lap – completing the points scorers.

A huge day for the Championship comes to a close with the margin back at just three points, and it’s everything on the line once again. Don’t miss the Valencia GP next time out – more drama awaits!

Raul Fernandez: “It’s the first time victory and I’ll never forget it here in Valencia. I remember in 2016 I got my first victory here in the Junior World Championship, maybe it’s the track! I like MotorLand and Valencia, they’re my bets tracks. I want to thank my family one year ago was a difficult moment, a difficult family situation, and in those moments you know who your family and friends are. The people who help you in the difficult moments. I want to say thanks to my family and my team, it was difficult at the start of the season I had a lot of pressure and Aki helped me, especially with pressure, now I don’t have pressure and I enjoy it more and I want to say thanks because he helped me in every aspect, as a rider and person and I want to say thanks. I have no words, I want to enjoy this victory with my family and team.”