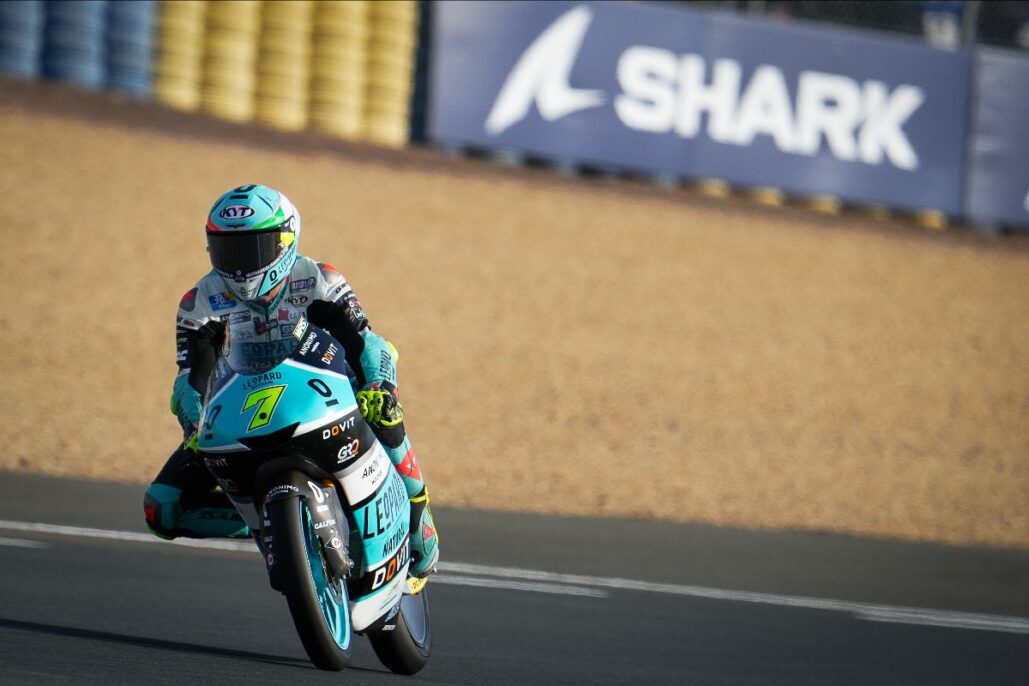 The fight back begins as the number 7 heads the grid in a Leopard 1-2, Garcia secures seventh.

Q1
Under the continued sunshine, Deniz Öncü (Red Bull KTM Tech3) topped Q1 to seal his place in the battle for pole, bouncing back from a FP3 crash.

Q2
As the initial quick runs came to an end, it was little surprise to see everyone playing catch up with Foggia as the Italian continued his impressive French GP form, leading teammate Suzuki in a provisional Leopard 1-2.

As the clock ticked towards the three-minute mark, the lightweight class had time for a couple more flying laps. Masia posted an effort that was good enough to get him into the top three on his first attempt, with Carlos Tatay (CFMoto Racing PrüstelGP) also moving up the timesheets.

Meanwhile, neither of the top two had improved on their opening efforts. The timing screens then saw a number of riders light up the first sector in red, but of all of them, rookie Diogo Moreira (MT Helmets – MSI) was best placed to take a late pole. However, he couldn’t quite keep up the push and will have to settle for P4, dropping Tatay to fifth.

There was still one rider out there who could dislodge Foggia, and that was Championship leader Garcia. After an encouraging first couple sectors, the Spaniard then lost time in the and in the end will have to launch his bid for victory from seventh on the grid, one place ahead of his starting position last year.. when he won. For good measure though, Foggia also put in one more fastest lap of the session, confirming pole.

Garcia and Guevara are next up, with Rossi taking P9 on the grid via Q1. Öncü completes the top ten, ahead of Joel Kelso (CIP Green Power) and Ayumu Sasaki (Sterilgarda Husqvarna Max).

That’s the grid decided, and now it’s eyes to the skies ahead of the SHARK Grand Prix de France. Will the sun remain on side in Sarthe? Find out when Moto3™ head out at 11:00 (GMT +2) for another spectacular showdown.

Dennis Foggia: “I’m really happy about my first pole position. I’m happy cause I feel so good on the bike. It’s an incredible Grand Prix, well, for the moment! Every session at the top, this is good for us. Happy, happy, because I think we did a good job in the Barcelona Test and now we are ready for tomorrow. On Sunday we will see!”