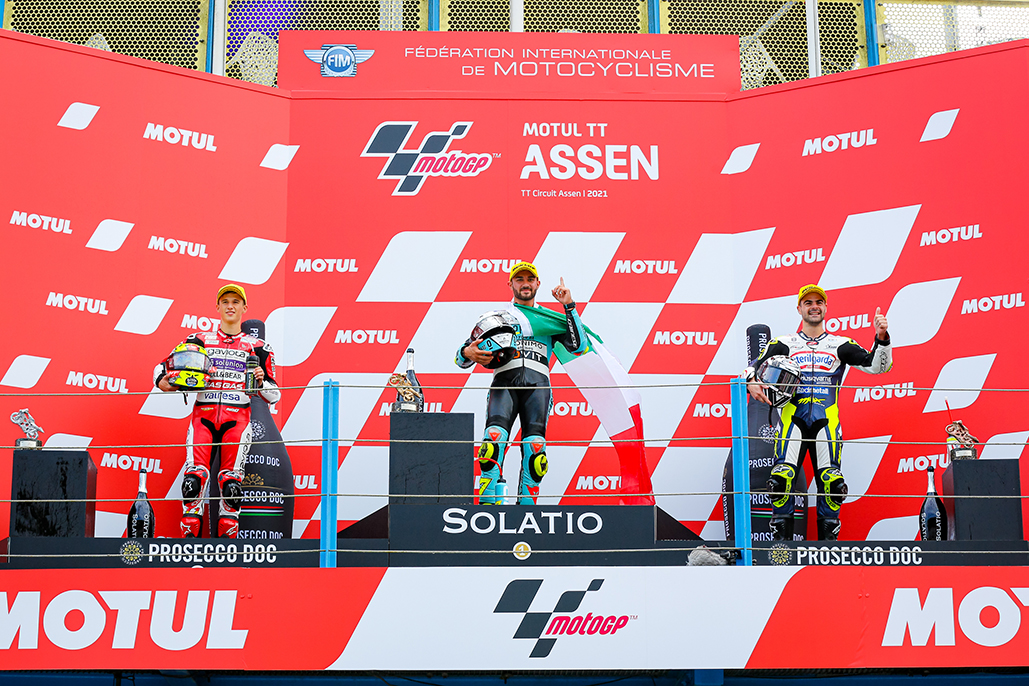 Dennis Foggia (Leopard Racing) took his second win of the season in style at the Motul TT Assen, leading from the front for much of the race and taking another 25 points to move himself into third in the standings. Sergio Garcia (Gaviota GASGAS Aspar Team) took second to consolidate second in the Championship and makes some gains on leader Pedro Acosta (Red Bull KTM Ajo), with Romano Fenati (Sterilgarda Max Racing Team) completing the podium, impressively despite two Long Lap penalties.

That left second in the standings Garcia, Foggia, his teammate Xavier Artigas, Darryn Binder (Petronas Sprinta Racing), Alcoba, his teammate Gabriel Rodrigo and Tatsuki Suzuki (SIC58 Squadra Corse) in the front group, although Fenati was able to get back in the mix and Pedro Acosta was soon on the scene from 18th on the grid. The Spaniard was declared fit to race on Sunday after missing qualifying.

The rhythm was fast at the front and the lead did change, but Foggia was a key presence throughout as he stuck to his style of hitting the lead and trying to stay there. That saw those on the chase lose more and more touch with the lead group, with only six riders set to prove able to stick it out to the end in the podium fight.

Coming onto the last lap, Foggia still led that podium fight, and the Italian had the hammer down ahead of Fenati and Garcia. It looked like the Leopard rider would be hard to catch, but Garcia was on the charge against Fenati and dispatched the Italian quickly, then closing and closing on Foggia in the lead.

As the final chicane dawned, the Spaniard wasn’t quite close enough and Foggia crossed the line with a tenth in hand for his second win of the season, in what’s fast becoming ‘Foggia’ style. Garcia takes second by just 0.078 but crucially was ahead of Championship leader Pedro Acosta, with Acosta taking fourth in the end. Fenati held onto third and thought better of a final chicane move, 0.129 off Garcia over the line.

Acosta’s fourth was awarded after the flag after Binder, who had passed him at the final chicane, was docked three positions for exceeding track limits earlier on the final lap so the South African is classified seventh. Tatsuki Suzuki takes fifth, ahead of McPhee by just 0.065, with Binder next up.

Rodrigo dropped off the back of the front fight in the end, taking eighth at the flag and some solid points after a tougher weekend ahead of the race. Artigas was close on his tail, the two split by just 0.045. Jeremy Alcoba completed the top ten from pole, the Spaniard riding at the track for the first time. Setafno Nepa (BOE Owlride), rookie Izan Guevara (Gaviota GASGAS Aspar Team), Kaito Toba (CIP Green Power), Niccolo Antonelli (Avintia Esponsorama Moto3) and Deniz Öncü (Red Bull KTM Tech3) completed the points, Antonelli despite a crash with Andrea Migno (Rivacold Snipers Team) after which the latter was forced to pull back into the pits.

That’s it for the first half of the season, with Acosta heading into the summer break with a healthy lead and the closest man on his tail, Sergio Garcia, with some good momentum at least before the battle continues at the Styrian GP. Tune in for that from the 6th to the 8th of August for more Moto3™!

Dennis Foggia: “I’m happy! It was an incredible race, a hard race, but first of all congratulations to Romano Fenati because P3 with a double long lap penalty…so strong. For me, I’m really happy, the bike was perfect, but also the street so fast, so I’m really happy. I think I am third in the Championship so today was important to take points, because many riders took a penalty…my goal today was to win, and in the end I won so I’m really happy, I’d like to thank my team. Also, my goal was to go on the holidays calm and so, I’m really happy and see you in one month.”