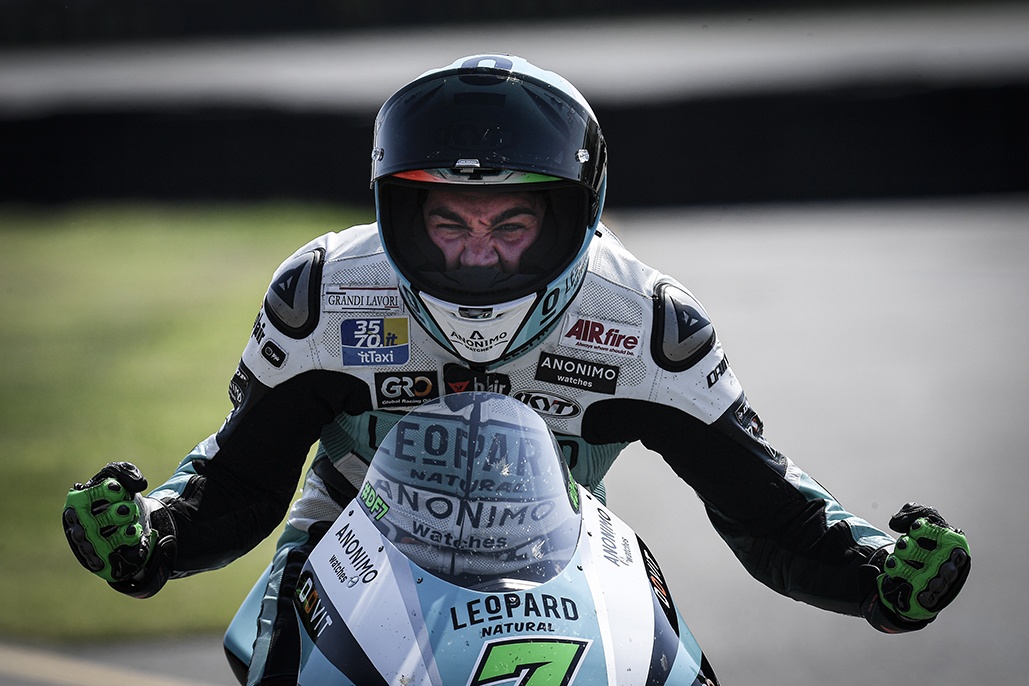 The Italian joins the winners’ club as he fights off Arenas and Ogura in another Moto3™ melee at Brno.

Dennis Foggia (Leopard Racing) produced a superb ride at the Monster Energy Czech Republic Grand Prix to claim his maiden Moto3™ victory, the Italian leading over half the race to eventually fend off Championship leader Albert Arenas (Gaviota Aspar Team) by two tenths. Ai Ogura (Honda Team Asia) completed the podium after hustling Foggia for much of the last lap, forced to settle for third in the end but consolidating his position in the Championship as he leaves Brno second.

Launching well off the front row was Gabriel Rodrigo (Kömmerling Gresini Moto3) and it was the Argentinian who grabbed the holeshot, with polesitter Raul Fernandez (Red Bull KTM Ajo) slipping to P3. The best start of all was from Arenas, however. Starting seventh, the Spaniard had a blinder and was leading the race by at Turn 3 as he pushed from the off. Rodrigo was then out the seat through Turn 7 and the riders behind had to sit up too, giving Arenas a substantial lead as the riders completed the opening lap in Brno.

Arenas’ eight-tenth advantage was cut within a lap and a half though, with the top 15 starting to edge clear of 16th place Deniz Öncü (Red Bull KTM Tech3) in the opening exchanges. But that gap was also soon diminished though as the leading 27 riders were covered by just four seconds.

A rider who we expected – but haven’t seen as of yet in 2020 – to be at the front this year then took the baton. Foggia and Ogura had got the better of Arenas with 12 to go, and in the final 10 laps things would really heat up. Alonso Lopez (Sterilgarda Max Racing Team) highsided on the exit of Turn 3 on Lap 9, but then drama unfolded for one of the title favourites. Turn 10 had looked troublesome for Suzuki and with nine laps remaining, the Japanese star was down and out of the race, taking his first zero of the year…

Heading into the final three laps, Foggia was still holding onto the lead, with Arbolino looking for a way through but unable to make anything stick. Suddenly the latter was shuffled back courtesy of a move from Arenas at Turn 1 as well, leaving Leopard Racing’s Foggia and teammate Jaume Masia 1-2… before drama then struck at Turn 11 with two to go as Masia slid out of contention. Ogura then made his move up into P2 past Arenas as the last lap began, with Foggia heading Ogura and Arenas, and Antonelli and McPhee in fourth and fifth…

Ogura swept through at Turn 3 but Foggia got the cutback into Turn 4, with Arenas then getting a good run down the hill to grab second. Ogura was back through moments later though, looking threatening behind the leader, but Foggia kept the door closed. Arenas then picked the pocket of the Japanese rider up the inside at Turn 12, ultimately costing the Honda Team Asia rider a chance to get a good run up horsepower hill and really fight it out for the win. Foggia was a good few bike lengths clear by then, and the Italian rounded the final two corners without hassle from behind to take the chequered flag in P1 for an impressive first victory. Arenas held on to keep P2 from Ogura as the top two in the Championship went toe-to-toe on the last lap, the Spaniard extending his points lead.

Just off the podium, Antonelli took fourth and some solid points, with McPhee putting in a solid comeback to complete the top five and take a good haul of points too. Polesitter Fernandez was a couple of tenths off McPhee to finish sixth for the third race in a row, but the Spaniard beat former FIM Moto3™ Junior World Championship rival Alcoba as the duo battled it out in the lead group throughout.

Behind them, Arbolino and Fenati crossed the line with nothing to choose between them, but it was the Rivacold Snipers Team rider who just took P8. Fenati still achieves his best result of the season and his first top 10 of 2020 for Husqvarna though, with Stefano Nepa (Gaviota Aspar Team) getting the better of Kaito Toba (Red Bull KTM Ajo) to head the second freight train of riders over the line in P10.

The Championship battles took another twist in Brno, with Arenas stamping more authority on the lightweight class 2020 title race – but it’s far from over. Coming up is a double-header at the Red Bull Ring and you can bet there’s going to be drama, with the likes of Ogura and McPhee eager to claw back their disadvantage.

Dennis Foggia: “It’s beautiful because it’s my first win in the World Championship. My goal was to push in front the whole race, and with ten or 11 to go I thought, ‘ok, push!’ It was crazy and the last lap especially. I’m really happy about the race, the team, the bike is different for me and it’s a bit strange at times, but we are working on the bike for me. I’m really happy and I want to thank my team and my family!”