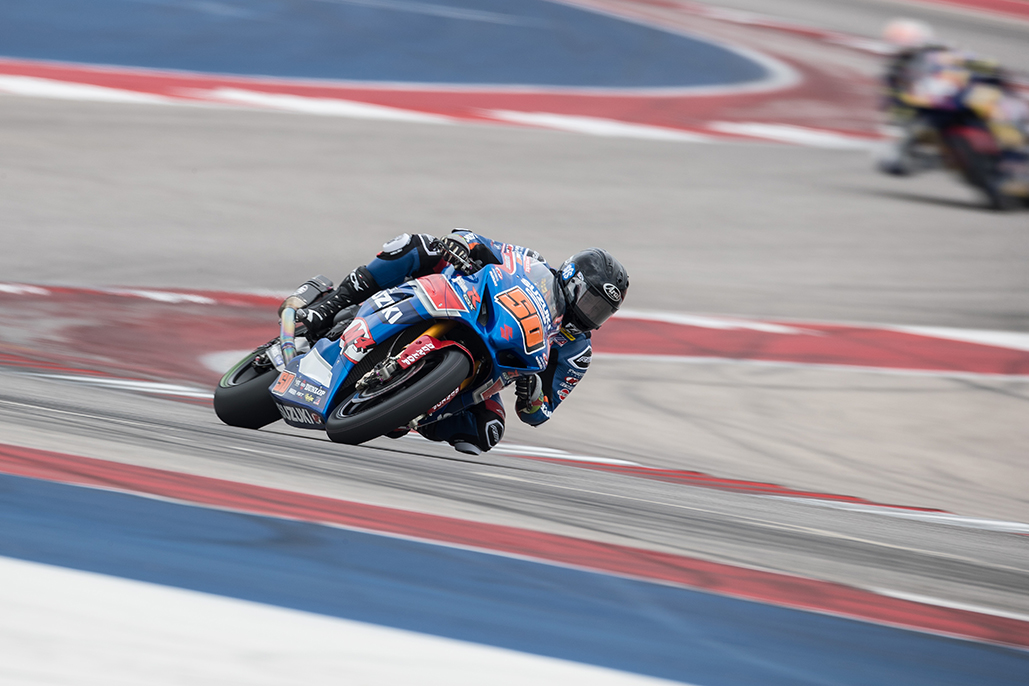 M4 ECSTAR Suzuki’s Bobby Fong ran through the gamut of emotions in the final session of the two-day Dunlop Preseason Test at the Circuit of the Americas on Wednesday – elation, disappointment and, ultimately, happiness.

Fong turned in the best lap of the test in the eighth and final session today, but the lap was initially taken away when it was reported that he had cut the track. The issue was resolved, however, when it was determined that Fong cut the track, but not on his fast lap. That meant that Fong leaves Texas with bragging rights as the fastest Superbike rider over the two days, his 2:08.343 bettering Loris Baz’s 2:08.595 from Tuesday’s final session.

“Hero to zero like that,” Fong said before knowing that his quick lap had been reinstated. “They said I cut the track, but I didn’t. I wouldn’t lie and I’d be honest here. We did a good test and it’s unfortunate not to see my name on top. The team has been doing a lot of hard work here and it’s unfortunate for the team because we wanted to be on top. But we will bring it to Atlanta and bring the heat. We haven’t tested at all and I haven’t been on a road race bike since October and have just been riding motocross a lot. Yesterday was kind of weird. We started off really strong and then we cracked a swingarm and had to go to a back-up one that we had to test anyway. It wasn’t working as well and we need to do more development with that, but with that being said they fixed the swingarm overnight and we got back to where we started, and we just started improving today. Overall, it was a really good test.”

“It was a great test, and we got a lot done,” Gagne said. “We worked through a lot of stuff, a lot of chassis stuff and electronics. Luckily the weather held out today. It was little windy, but actually pretty nice. We got a lot of laps in and just got to try stuff to see what works, what doesn’t work. My goal was working with my crew chief; we weren’t focused on lap times. I think a lot of the guys were using the softer tires and we stayed on the nine-sevens the whole time. We just wanted to work on things so I could get a feel for what the bike does when we do this or that. We really learned a lot. We didn’t want to throw down lap times we wanted to do what we could do to build a good race setup.”

Third fastest overall on Wednesday was Westby Racing’s Mathew Scholtz with his 2:08.957 with the South African doing his best in today’s third session.

Frenchman Loris Baz, who was making his MotoAmerica debut, slipped down the order today to fourth fastest, but his fast lap from yesterday put him just behind Fong after two days of testing on the Warhorse HSBK Racing Ducati New York Panigale V4 R. Baz also had his first MotoAmerica crash, a slow tip-over in turn one early in the final day.

“Definitely, the conditions were different than yesterday,” Baz said. “Really windy and the bike is pretty sensitive to the wind with the wings. But it was good to try the bike in completely different conditions than yesterday. I did a lot of long runs, honestly, and the only time I tried a softer tire was at the end and I didn’t use it well. We worked on making long runs on the race tire, like 10-lap runs. We did a good job, and I had a better feeling on the long run than yesterday. The lap times were a bit slower, but we did a good job.”

Fly Racing ADR Motorsports’ Jayson Uribe and David Anthony ended up seventh and eighth, though Uribe was fortunate to escape injury in a high-speed crash in the penultimate session today.

The battle for supremacy in the 2021 MotoAmerica Superbike Championship will kick off in earnest at Michelin Raceway Road Atlanta, April 30-May 2.

HONOS Kawasaki rider Richie Escalante’s defense of his 2020 Supersport Championship doesn’t begin until round one at Michelin Raceway Road Atlanta, but he made a convincing statement at the preseason test that he is clearly the favorite to take the title again in 2021. Escalante led all eight Supersport practice sessions aboard his 2020-spec machine, and he anticipates that his 2021 Kawasaki ZX-6R will be an even better bike than the one on which he won 13 races last year.

In SportbikeTrackGear.com Junior Cup, Landers Racing Kawasaki rider Ben Gloddy made good work of the two-day test as he was the quickest rider in all but the final practice session. He’d most likely have been a perfect eight for eight, but he suffered a minor tip-over during Practice 8 and, even though he was uninjured, he wasn’t able to record a lap time during the concluding session. In Twins Cup, Wrench Motorcycles Yamaha rider Ethan Cook went quickest overall.