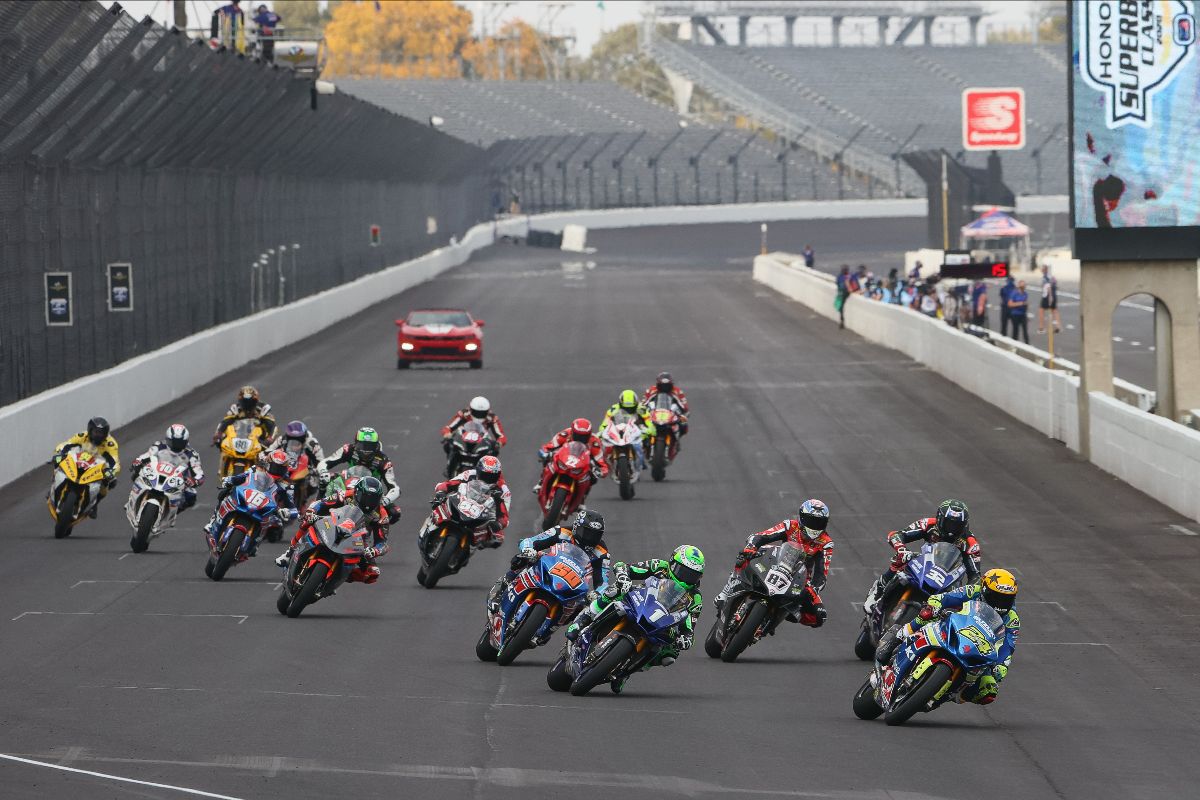 If you wanted some drama in the MotoAmerica Superbike Series, your wish was granted in the first of three HONOS Superbike races at Indianapolis Motor Speedway with M4 ECSTAR Suzuki’s Bobby Fong emerging from the melee at The Brickyard with his second-career AMA Superbike victory.

In circumstances eerily similar to his first win of the year and first of his career at Road America earlier in the season, Fong was again in second place when runaway championship leader Cameron Beaubier crashed out of the lead. And, again, it was Beaubier’s Monster Energy Attack Performance Yamaha teammate Jake Gagne who ended up hounding Fong to the checkered flag.

In today’s race, which featured two red flags and two Beaubier crashes, Fong was in second place when Beaubier crashed on the fourth lap of the third restart, but he was pressuring the Yamaha man when the crash occurred. From there Fong was chased by Warhorse HSBK Racing Ducati New York’s Lorenzo Zanetti, the Italian taking the lead at one point before running off the track. Zanetti managed to stay upright, however, and he fought his way back to third place by the end of the 15-lap race, which translated to three different manufacturers on the podium and four different brands in the top five with Josh Herrin ending up fifth on the Scheibe Racing BMW.

Meanwhile, following Zanetti’s mistake, Gagne was on the move and closing in on Fong, the two Californians crossing the line with just .228 of a second between them. At Road America, Fong beat Gagne by .509 of a second.

There was drama before the race even started with Beaubier deemed late to get out of pit lane for the start of the sighting lap, meaning that he would be forced to start from the back of the grid. He did just that, going from 20th to sixth in one lap before the first red flag came out for Kyle Wyman’s crash coming on to the front straight.

Beaubier started sixth on the next restart and was in the lead pack when both he and Westby Racing’s Mathew Scholtz went down almost simultaneously in fluid that was leaked onto the track by a previously crashed motorcycle. After the cleanup, Beaubier was able to make the restart while Scholtz was being transported to the hospital with an ankle injury.

On the third start, Beaubier got into the lead quickly but wasn’t getting away from the pursing Fong when he crashed on the fourth lap in the final corner, the same spot that claimed Wyman. The four-time MotoAmerica Superbike Champion’s bike was too damaged to continue, and he was forced to be a spectator for the rest of the race.

When asked post-race if this win at Indy felt better than the Road America victory based on the amount of pressure he was applying to Beaubier when the crash occurred, Fong nodded before saying, “I didn’t know how to feel because we’re just so used to Cameron (Beaubier) just checking out. Then when I saw I was reeling him in and I saw my lap time I was like, ‘We’re going pretty fast.’ I felt pretty good, too. I wasn’t out of control. I could see his body language change a little bit when we were riding, pushing hard for sure. It was unfortunate. With the drop in the tires you really have to be gentle flicking it into that last turn. It is really easy to lose the rear on corner entry. I saw him go down. I’m like, ‘Oh man. Now I got a long race.’ I knew Jake (Gagne) and I knew (Lorenzo) Zanetti and Toni (Elias) were going to be behind me, so I was just trying to hit my marks and tried not to do anything stupid. It got so slick out there it’s like one little extra juice in the throttle, you’ll get shot to the moon. I just tried to stay steady and ride my own race.”

Gagne took over second when Zanetti ran off the track, and he closed on Fong before coming up just short at the finish.

“Obviously, we want to win, but hats off to Bobby (Fong),” Gagne said. “He rode really good. Hats off to all these guys. We’re riding really good. It was a bummer to see Cam (Beaubier) go down. It was a bummer to see Mat (Scholtz) go down. Obviously, it was crazy with a couple of those restarts and a couple heat cycles on the tire. It made it tough starting on the second row. My starts weren’t too good. Those guys were going fast right away and it took me a little while to get into a good flow. Then I kind of started just inching back on those two guys. Then the Ducati ran off and missed that shift. I was trying to get to Bobby, but there were just some sections he was faster, and some sections I was a little faster so we were kind of teeter-tottering back and forth. The only shot I kind of thought I could have is if I could get up there close on the last sector and get a great drive up the last turn and see if I could get that Yamaha some draft, but I just didn’t nail that last sector. My last turn wasn’t too good. Again, hats off to Bobby and hats off to all these guys. Hopefully, we get a couple of these more Yamahas back here tomorrow. After seeing a couple more of those Yamahas go down, I was like, ‘I got to bring this thing home.’ We got some points and another second place, but we want to fight for a win, so we’ll see what happens tomorrow.”

As mentioned, Zanetti led before his off-track excursion and he ended the day third in what was just his second MotoAmerica round (and his third race). It was the first podium for Ducati in the series since Kyle Wyman did it twice at Road America 2 earlier in the season.

“Is the second race, but in the end it’s the first with a Superbike,” Zanetti said. “So originally was stock (bike). So, it’s the first time I have the potential to try for the podium, but it’s not easy when you are young, and you have many fast riders and you try to understand and manage in a couple days. It’s not too easy. I tried this morning a little bit base to understand how is my potential in the race. But in this race, it’s unbelievable. Three restarts, oil on the track, so it’s not easy to expect it. I just try to follow Bobby (Fong) on the first part of the race. When I see him drop a little bit on the tire, I tried to catch him and did my rhythm, tried to win. I did a stupid mistake. I missed a gear. So, unfortunately, I go on the gravel. I go back. I see Toni (Elias) struggle on the tires so I pushed too much in the last four laps. When I overtake him I got on the podium so I arrive on the podium. It’s not easy. It’s important for me, for the team. I want to thank you all to give me the chance to fight on a good bike with good riders. Thanks also to MotoAmerica, to give me the opportunity.”

M4 ECSTAR Suzuki’s Toni Elias took over third for a few laps after Zanetti’s miscue, but he had no grip and couldn’t keep the Ducati behind him. At the finish, Elias was some two seconds adrift of the Italian, but was over 18 seconds ahead of fifth-placed Josh Herrin on the Scheibe Racing BMW.

Heading into tomorrow’s two HONOS Superbike races at Indianapolis Motor Speedway, Beaubier leads Gagne by 83 points, 325-242. For Beaubier to be crowned champion at The Brickyard, he has to be 75 points ahead of Gagne at the end of the day on Sunday as three races will also be held in the upcoming series finale at WeatherTech Raceway Laguna Seca.