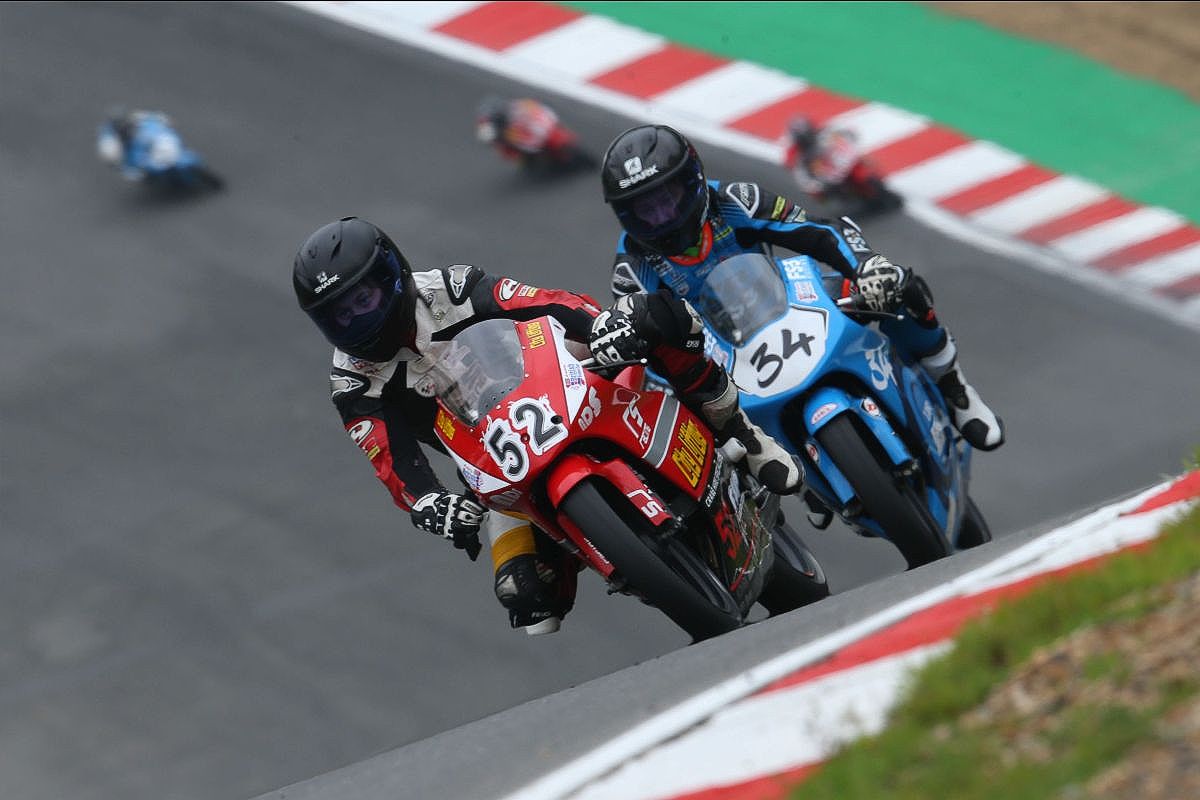 Round 4 awaits and there’s one key question ahead: can anyone stop Evan Belford?

After another two close races at Brands Hatch, the Honda British Talent Cup has an even quicker turnaround this week as the grid heads for Thruxton to go back-to-back at another weekend of close competition. And that adjective has been apt on track, but in the standings there’s one rider emerging as a clear favourite by the time August rolls in: Evan Belford (City Lifting by RS Racing). So can he be stopped?

With 50 points on the table each weekend, the maths already tends towards a yes. But Belford is not only making a habit of winning – a double at Round 2 and another win at Round 3 – he’s also seen his rivals shuffle behind him. Carter Brown (City Lifting by RS Racing) beat him in Race 1 at Brands Hatch to bounce back from some bad luck, but was then forced to settle for fourth in Race 2. Johnny Garness (City Lifting by RS Racing) came second twice at Knockhill to do some damage control in the points, but then took a fifth and a third. James Cook (Wilson Racing) has also taken only top fives – including two podiums, one of which was that second place just 0.061 off the win – since his difficult start to the season to now sit fourth. So a good group of riders have shown similar pace and can take heart from that, with consistency and tactics seemingly a bigger aim than finding huge chunks of time.

Fifth overall, meanwhile, is now Cormac Buchanan (Microlise Cresswell Racing) despite a crash on Sunday at Brands, and the Kiwi rookie may find that another first for the BTC, this time debuting at Thruxton, could prove more of a leveller. He and injured teammate Casey O’Gorman lead a tight battle in the mid-top ten, with Jamie Lyons (C&M Motors Ltd/Tooltec Racing) next up after a metronomic season of solid points hauls. Equal on points with Lyons, Harrison Crosby (Banks Racing) is next in the table and will want more from Thruxton after a podium at Knockhill and then a much tougher weekend at Brands Hatch, and Ollie Walker (Moto Rapido / SP125 Racing) sits only one point further back as his trend of moving forward in Race 2 – and scoring some good points – continues.

Ryan Hitchcock (Wilson Racing) has usually been ahead of that gaggle on the road but will want to iron out his consistency with one more DNF than both Crosby and Walker, putting him one point down on the latter. Bailey Stuart-Campbell (151s Racing) will be keen to crack into the top ten too, as will Sullivan Mounsey (iForce Lloyd and Jones), who has made some big early impressions in a few races so far this season but will want to be able to stay nearer the front all the way to the flag.