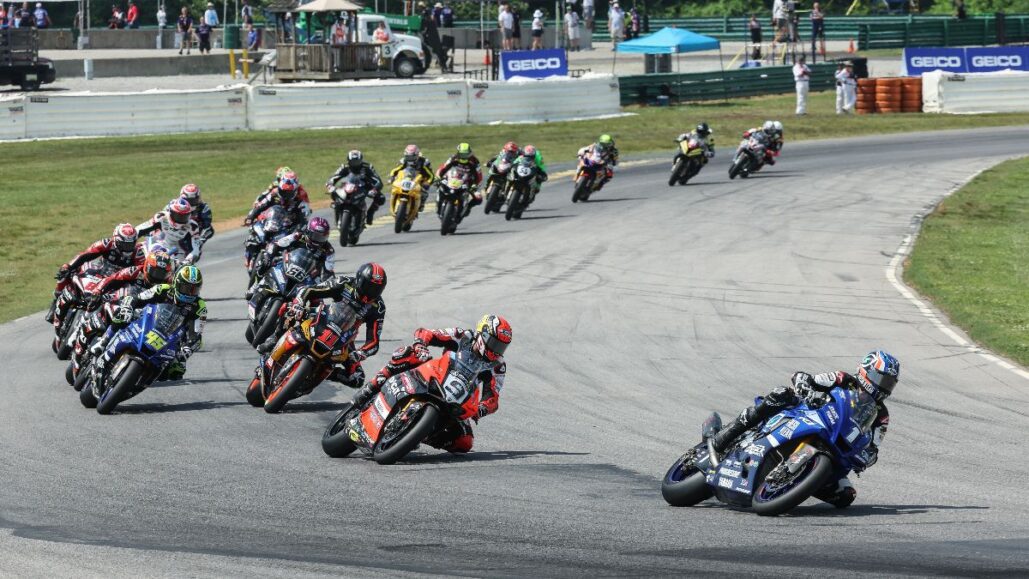 The Defending MotoAmerica Medallia Superbike Champion Jumps Up To Third In The 2022 Series Standings.

With the debacle that was the opening round of the MotoAmerica Medallia Superbike Championship at Circuit of The Americas and race one at Road Atlanta now a distant memory, Fresh N Lean Progressive Yamaha Racing’s Jake Gagne has most definitely righted the ship with his second win a row coming in race one on Saturday at VIRginia International Raceway.

Gagne led the pack into turn one from his fifth pole position in succession (and the new VIR lap record that came with it), withstood early-lap pressure from Warhorse HSBK Racing Ducati NYC’s championship leader Danilo Petrucci, then did the same with Westby Racing’s Mathew Scholtz.

When all was said and done, Gagne had his 19th career MotoAmerica Superbike win in pocket, his second win in a row in 2022, and a jump all the way up to third in the championship point standings.

Scholtz ended up second, his fourth runner-up finish out of the five races held thus far in 2022 and sits second in the championship – just eight behind Petrucci.

Third place went to Gagne’s teammate Cameron Petersen, the South African fighting his way past Petrucci and hooking up with Scholtz until losing a bit of touch in the closing stages. Petersen ended up almost two seconds behind his countryman Scholtz at the finish line, giving Yamaha a sweep of the Medallia Superbike podium on a blazing hot day in Virginia.

Petrucci was a lonely fourth, some 10 seconds behind Petersen and 10 seconds ahead of fifth-placed Jake Lewis on the Vision Wheel M4 ECSTAR Suzuki.

Lewis also had a rather lonely ride, but the same couldn’t be said for the three riders behind him in the fight for sixth. That spot went to Tytlers Cycle Racing’s Hector Barbera by .149 of a second over his teammate PJ Jacobsen with Aftercare Hayes Scheibe Racing’s Aston Yates eighth on his BMW and just half a second behind the two Tytlers BMWs.

With five races complete in the 2022 MotoAmerica Medallia Superbike Championship, Petrucci leads Scholtz by eight, 88-80, with Gagne third on 66 points – just one point ahead of Petersen. Barbera rounds out the top five with his 56 points.

Jake Gagne – Winner
“Cam (Petersen) got a great start. I thought he had the holeshot, but I just barely snuck up in there and won. Even from my first flying lap, it was a lot slicker than I anticipated, I think for most of us guys. Front, rear… First, second lap it already felt like we had 10 or 15 laps on the tire. So, right away my goal was just knock it back a couple percent and just do a pace where I couldn’t make mistakes, because mistakes could happen really easily today when it’s this slick and this hot. I could hear the Ducati (Petrucci’s) behind me. I figured it was him because you can hear that thing. In the slow turns, you hear that thing revving behind you. I figured Mat (Scholtz) and Cam were right there too. I just wanted to get through the first half of the race with no mistakes, and then just see where we end up. I just had a little over a second or whatever it was around halfway. It got tougher and tougher. Those last couple laps the tires were really tearing up and it was getting hotter and hotter and hotter. So, I’m happy to bring this thing home. Like I said, it was a tougher race than I really anticipated. I think just the heat and the tires. But this Yamaha rode really, really good. I think the name of the game was just to be smooth and not make mistakes, because mistakes can happen easily out there when it’s this tough. Hats off to the team. We’ve got work to do tomorrow. Everybody’s going to be going faster. I think everybody can learn from today. Looking forward to tomorrow.”

Mathew Scholtz – Second
“We knew that the morning practices, obviously the lap times seemed to be quicker. Maybe I was just a little bit eager and tried to set up the bike more for those cooler conditions with less spinning, because from the first lap out I was getting that thing sideways, spinning up in every single corner, which kind of made my forearms swell up slightly. Not to sound like I’m moaning about a couple things, but it just was a very difficult race for me. Danilo (Petrucci), looking at the practices, I kind of knew that he only had a couple laps, and he would drop off, but he hung in there a lot longer than what I thought. I kind of closed up to Jake (Gagne) and Danilo slightly, but once he started dropping off and I kind of got caught up with him, Jake opened up. I got past him and tried to catch up to Jake. I had a few pretty big moments spinning up, so I just had to settle for second. I thought it was going to be a pretty easy second, and then looking at the board I could see that somebody was catching me at a drastic pace. I thought it was Danilo maybe finding his groove again. Then I looked back, and I had this guy (Petersen) chasing me down. From maybe lap eight to lap 16, I was pushing as hard as I could, but maybe the last four laps or so Cam kind of dropped off slightly which definitely helped me because I was under the limit there. I thought that we would have something for Jake today. Obviously, he still has something more. So, I just have to go back to the pits now and figure out how to get off the corners better without spinning so much. Overall, it’s really awesome to be up here with Jake and Cam. Really good, good friends. We’ve been through some things together, so it’s awesome.”

Cameron Petersen – Third
“It really was a tough race. Hot and greasy out there. I got off to a great start and then the front three guys came past me pretty quickly. I kind of got a little bit erratic. I was out of the seat, running wide everywhere. Even in the last turn, I ran so wide I almost went off the track onto the curb on the outside. I just took a few laps to regroup, take a couple breaths and then just started trying to hit my marks from there. I think I got a little bit lucky because (Danilo) Petrucci was dropping back. So, that kind of held Matty (Scholtz) up and gave me the chance to close in with him. Then once I had that carrot to chase him, I was able to latch onto Matty a little bit. I think with about four laps to go, five laps to go, I started having a few moments. I was really good onto the brakes into one. The right side of the front tire, with a few laps to go, I could feel every time I tipped in. I had some moments. Just tried to do the sensible thing, the smart thing and bring the bike home. I just want to progress from race to race. I feel like we’re doing that. Actually, really stoked with my ride today. I know what we need to work on for tomorrow. Hopefully, if I’m in the same position, I’m not going to let it go that easy and push all the way to the end. Congrats to these two guys, once again. These are some of my best buddies and being up here on the podium with them is pretty cool. Let’s just keep this train going for the rest of the year and hopefully switch up some positions here and there, but let’s keep it like this.”