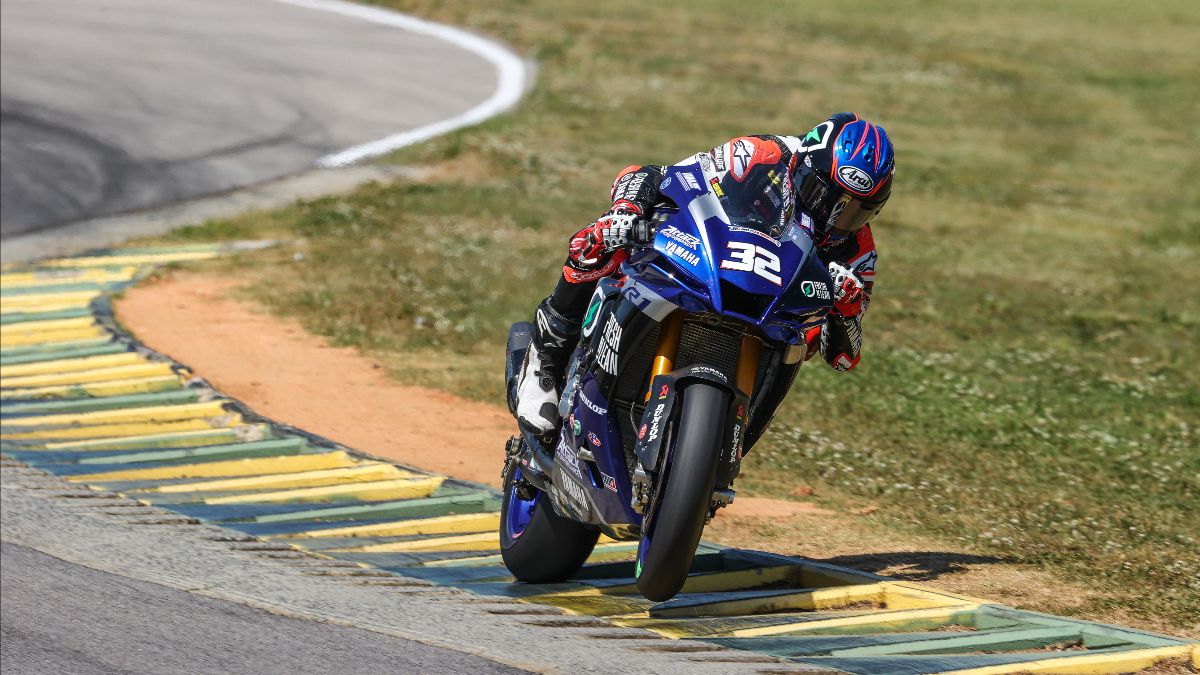 Top Seven Superbikes Covered By Less Than A Second As Round Two Gets Started.

Fresh N’ Lean Attack Performance Yamaha’s Jake Gagne picked up where he left off from the opening round of the 2021 MotoAmerica Series two weeks ago, the race-two winner at Road Atlanta leading an ultra-close Q1 session on a stunning Friday afternoon at VIRginia International Raceway.

Gagne set the best lap on his fourth go-around, a 1:24.103 that was just .155 of a second faster than his teammate Josh Herrin with Herrin doing his best on his 17th lap and while chasing Gagne.

The top seven riders circulated VIR on the same second.

Gagne’s best lap was just .313 of a second off five-time MotoAmerica Superbike Champion Cameron Beaubier’s lap record which was set during Superpole in 2018.

“It was a good start,” Gagne said after putting his Yamaha YZF-R1 on provisional pole. “After Atlanta, I knew we would roll out the bike with the same settings and different gearing, obviously, for a different track, but the track felt really good right away. Couple little kinks here and there and this race will be different. These tires are gonna be a little tougher in the heat, they will wear a little more. In Atlanta we saw those tires held up good almost the whole time, but I think this week will be a battle of keeping the pace up and keeping the tires in decent shape and trying not to get too much out of it. This Yamaha is working good right off the truck. We will try a couple little tweaks tomorrow to see if we can get make the bike a little easier to ride. I’m happy and we have a great pace so it’s all good.”

If Gagne was having fun at the top of the charts, the happiest rider still looked to be M4 ECSTAR Suzuki’s Cameron Petersen, the South African all smiles as he ended the session third and .458 of a second behind in just his second outing on the GSX-R1000 Superbike.

Behind Petersen came countryman Mathew Scholtz, the HONOS Superbike Championship points leader .532 of a second behind Gagne in fourth.

Given the speed he showed in the season opener, it wasn’t a huge surprise that Benjamin Smith could lead the way on Friday in Supersport Q1, but he did just that. Lapping at a best of 1:27.654, the North East Cycle Outlet Racing Yamaha rider led championship points leader Sean Dylan Kelly by .093 of a second on Friday afternoon. MESA37’s Stefano Mesa ended up third with HONOS Racing Team’s Richie Escalante and MESA37’s Xavier Zayat rounding out the top five.

Escalante was riding with a broken collarbone that was plated a week and a half ago after the defending class champion crashed his bicycle in Los Angeles in the days following the Road Atlanta race.

The Twins Cup Q1 session was hotly contested on Friday afternoon with Teagg Hobbs lapping at 1:31.471 to best Jody Barry by .614 of a second with Toby Khamsouk third, 1.188 seconds off Hobbs’ pace.