Three races a championship does not make, but the performance of Fresh N’ Lean Attack Performance Yamaha’s Jake Gagne certainly makes sleeping a little rough for those who are racing against him.

Gagne won his third straight MotoAmerica HONOS Superbike race on Sunday at VIRginia International Raceway, and he did so in impressive fashion. Again. On Saturday, Gagne won by 11.8 seconds. Today that gap swelled to 13.9 seconds. As he did yesterday, Gagne led into turn one and proceeded to lead every lap thereafter, crossing the finish line well clear of Warhorse HSBK Racing Ducati New York’s Loris Baz, the Frenchman earning his first career MotoAmerica podium.

“Today was a little more comfortable for us,” Gagne said. “I think it was a little hotter today. I think the track temp was maybe a little hotter. So, I knew I needed to be a little easier on the tires because yesterday we roasted out here pretty good. After yesterday’s race, we really learned a lot, when you get a whole 20 laps underneath you in race conditions. So, we just made a couple minor tweaks, and the bike just came a lot easier for me to ride today. I was just having fun sliding around out there. It’s nice when you’ve got a little bit of a gap. I was keeping an eye on my pit board. But you can’t let up. These guys, I know they’re going to keep rolling and if you just back off a couple percent that’s when something can happen. So, I just kept riding and having fun. Hats off to the Fresh N’ Lean Attack Performance crew. Even after a great day yesterday, they went back and worked hard last night to get a couple little improvements coming into today. This Yamaha came off the truck good on Friday. We changed the gearing for Atlanta, and she was rolling good. I’m really looking forward to Road America. I think that will be kind of a whole different track than these first two we dealt with, so it will be cool to switch it up a little bit. It’s good to get a win.”

Baz’s race was eventful early as he battled with a pack of four for second place, but once he got to the spot, he was able to pull clear and monitor his gap to third place. He knew there was no catching Gagne. In fact, he knew that before the race started based on Gagne’s race pace from Saturday.

“I’m enjoying it a lot since three months,” Baz said of his working visit to the U.S. “We’ve been working so hard with the team to do good work. We knew that the test in Austin we were fast, but we knew we were coming to tracks where we struggle a bit more. I was surprised we struggled so much. Race one (at Road Atlanta where he crashed) we were able to win and race two the bike broke. It was hard to swallow that for three weeks. We came here with the same goal as Atlanta, but we just struggled more all weekend. We were so far off on Friday. We didn’t expect to put the bike in the top five. We were so far away. It was so hard to ride. The crew did an amazing job this Friday to improve the electronics and we made a decent qualifying. Unfortunately, we had trouble on the tire. I knew the track was killing the tread. It was a tough race yesterday before and today. I knew that the best we could do with our pace was P2. The target was to try to go behind Jake (Gagne) and follow him. I gave everything that I had and still could not do it. So, it was a lonely race, trying to increase the gap to the guys behind and just manage my tires because I didn’t know what to expect at the end. I was just managing the gap and had a couple of tenths. Just trying to bring it to the end because I was struggling with my rear tire. I’m really happy. I think one of the hardest parts of the Ducati we improved a lot. The target is still exactly the same as when I came. I know these guys are fast and I’m just ready to battle with them.”

Westby Racing’s Mathew Scholtz was roughed up in turn one off the start and finished the opening lap in 14th, but the South African didn’t give up and pushed his way through the pack, eventually making his way to the heels of those battling for third. When all was said and done, Scholtz had worked his to third to maintain his perfect season of podium finishes.

“I just saw one of the M4 Suzuki bikes coming up the inside, so I gave him space,” Scholtz said. “I could have followed him, but I don’t know what happened from there. I think Cam (Petersen) ran off the track. I’m not sure if he got touched. It’s just one of those unfortunate things. I’m trying to get aggressive in the first corner trying to hang onto Jake (Gagne) because I knew if I could slot in behind Jake, he would pull me and I kind of had the pace over everyone else after about lap eight or 10.”

Scholtz’s fourth podium, including his win in race one at Michelin Raceway Road Atlanta, keeps him in the MotoAmerica Superbike Championship lead with his 81 points, six more than the fast-closing Gagne. Gagne’s Fresh N’ Easy Attack Performance Yamaha teammate Josh Herrin is third with 61 points, the 2013 AMA Superbike Champion finishing off the podium for first time this season on Sunday at VIR.

Herrin, meanwhile, managed to hold off the advances of M4 ECSTAR Suzuki’s Bobby Fong for fourth with the latter bouncing back from mechanical issues that thwarted his progress on Saturday.

Kyle Wyman had his strongest race of the 2021 season, the Panera Bread Ducati rider in the fight for second/third early on before slipping back to finish sixth.

Fong’s M4 ECSTAR Suzuki teammate Cameron Petersen was some two seconds adrift of Wyman and in seventh after having to fight through from well back after being involved in the melee in turn one.

Scheibe Racing’s Hector Barbera was eighth, but he really deserved more. An off-track excursion cost him a shot at the podium as he was fighting for third when he couldn’t get the BMW stopped for turn one in the heat of battle and was forced to take to the grass.

Ninth went to HONOS HVMC Racing’s Corey Alexander, the Stock 1000-spec Kawasaki ZX-10R mounted New Yorker ending the race as the top finishing Superbike Cup entry. Franklin Armory/Disrupt/RG Racing/Kawasaki’s Andrew Lee had his best result of the season thus far in 10th, some four seconds adrift of Alexander and only .001 of a second ahead of Travis Wyman Racing’s Travis Wyman. 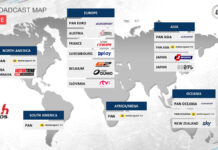