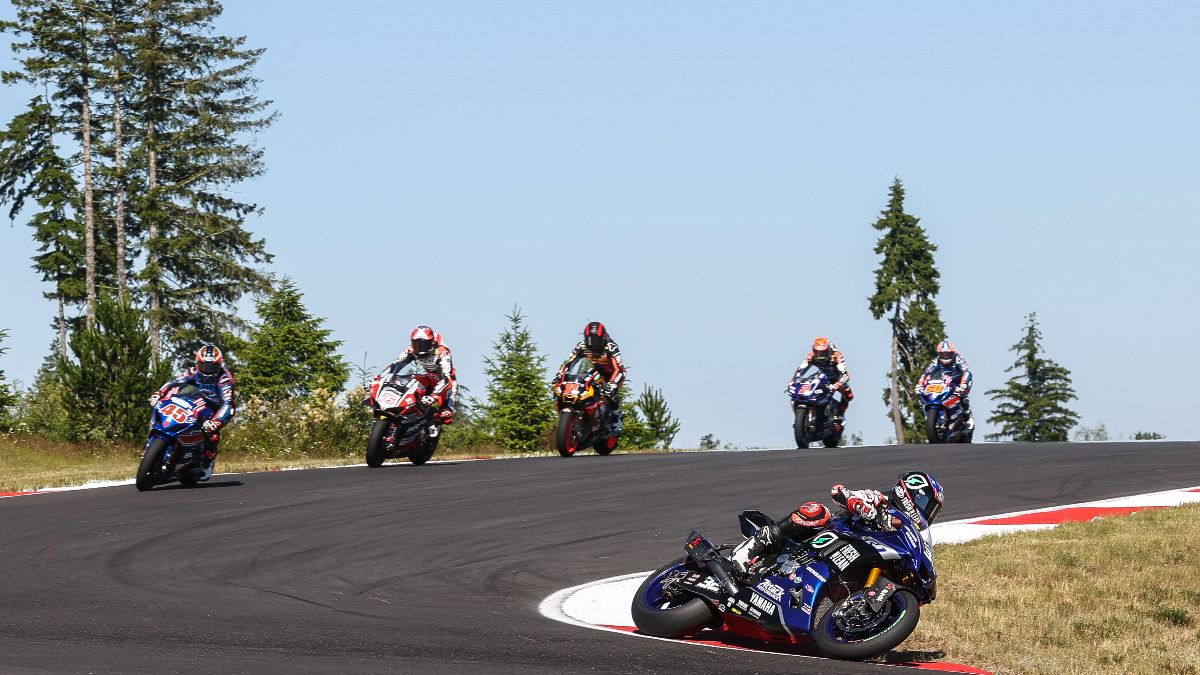 Fresh N’ Lean Attack Performance Yamaha’s Jake Gagne’s plan doesn’t change from race to race. And why would it? It’s simple, really. Qualify on pole position, get the jump on everyone off the start and put the race out of reach in the first handful of laps. Such was the case again on a scorching hot Saturday at Ridge Motorsports Park, the Californian winning his sixth-straight MotoAmerica HONOS Superbike race after leading from start to finish.

Gagne, who broke the track record during Q2 on Saturday morning, was unstoppable again. He led every lap and if it wasn’t for the oppressive heat, it could have been classified as a walk in the park.

“It’s kind of a balance,” Gagne said. “Especially this weekend, I knew if I got a good start, if I got through turn one, turn two clean then I could put my head down for a couple laps. It’s a balance. I knew with how hot it is these tires are taking a beating. It was hotter than all weekend, so I wasn’t really sure how we were going to end up after the second half. So, I got a good, solid gap in the beginning and then rode around and just tried to be smooth, be easy on the tires, not do anything crazy. I was actually impressed with how well these Dunlops held up again. Every single time I say that. Like Josh (Herrin) said, this team is working, working so hard, so it’s great to get Josh up here. These guys were close, man. I was looking at my pit board and I can’t let up. It’s only a couple seconds, but anything can happen. Again, hats off to the team. These guys are going to be coming even harder tomorrow and I know that we can make some improvements in a couple areas tomorrow because I know these boys will be gunning for me. Try to keep this ball rolling and again, hats off to everybody. It will be a hot one tomorrow, so it will be fun.”

Second place went to Gagne’s teammate Josh Herrin, the 2013 AMA Superbike Champion finding something in his setup that made him faster and more comfortable than in previous races. The second-place finish was Herrin’s best thus far in 2021 and he was 4.49 seconds behind Gagne after 17 laps.
“The biggest thing is time, I think,” Herrin said when asked what changes have been made. “I came into this season expecting to be where Jake (Gagne) is, and it was a hard lesson whenever it didn’t happen. It was a struggle. Mentally I just beat up on myself. I think kind of like Cam (Petersen) said, my realistic goal needs to be to just progress and try and get better as the season goes on. Obviously, my main goal is to try and win races, but I need to be smart about it and not throw it away and just progress throughout the season. So, I think we’re doing a good job of that. The team is putting in countless hours at the shop and here, even guys like Josef back at the shop that don’t get a lot of attention here at the races. He’s back at the shop building engines and keeping Attack going while Richard’s (Stanboli) here. So, it’s a huge team effort for these guys. They’re not only a race team but they’re a performance shop too, so they’ve got a lot of work back home when they get back from the races. Walker is driving the truck back and then working 24/7 when he gets home. So, it’s a big group effort. What we do is the least effort I think out of the whole thing, for sure. I think I made the smartest decision of my career in reaching out to Josh Hayes at the Brainerd test. It’s been huge just in the three days I’ve worked with him now. I’ve not only noticed a big difference on the track, but then also whenever I’m going over data with Richard it’s like I have something a little bit better than I had before. I can communicate a little bit better with him because Josh is telling me things that I’m doing on the track.”
Herrin’s first few laps were a bit daunting, and he came very close to crashing after losing the front at one point.
“The beginning of the race today, I had it,” Herrin said. “I felt so good at the beginning and (Loris) Baz threw a super sketchy pass on me into turn 12 and I tucked the front because I got out in the dirty stuff. But it kind of made me see like an Eslick (Herrin and Danny Eslick used to be fierce rivals) moment. I just got so fired up. It just made me push so hard. I think I rode like I haven’t rode since 2018. So, thanks to Baz for being sketchy and putting it on the line. Hats off to Jake (Gagne). Six races in a row is not easy. It’s cool being teammates with somebody that’s riding that good. Cam (Petersen) rode a great race. I’m sure that more of those guys are going to be up towards the front tomorrow, so we’ve got to get some rest tonight and be ready tomorrow.”
Herrin had his hands full for the majority of the race with M4 ECSTAR Suzuki’s Cameron Petersen with the South African hounding Herrin until giving up the chase after running wide in the turn one chicane. He ended up some four seconds behind in third place.

“The beginning of the race, I’m not going to lie, the first two laps I was really struggling,” Petersen said. “I knew Josh (Herrin) had some pace, so when he got by me, I tried to latch onto him. He actually ended up pulling a pretty decent gap on me. I knew we had done a lot of laps on old tires, so I was kind of waiting for that feeling to come back. Once I got used to that feeling with the tires, I started just trying to put in some clean laps. I managed to bridge the gap a little bit to Josh and then sat there for most of the race. I think five or six laps to go, I made a mistake going into the chicane. He got that second on me, or .8 or whatever it was, and that was pretty much race over for me. He had a pretty solid pace going the whole race, so I was definitely pushing behind him. It wasn’t easy at all. Super stoked to get another podium. That’s three in a row. First front row ever. So, we’re getting there. We’re slowly chipping away at it. But congrats to these two guys. Jake (Gagne) once again just on another level. It was fun riding around with Josh (Herrin) there. Congrats to these two guys.”

Warhorse HSBK Racing Ducati New York’s Loris Baz ended up fourth and 14 seconds behind Gagne after qualifying second and looking like he might have a challenge for Gagne in the race.

Gagne is blowing the championship up at this point as he now leads Scholtz by 32 points, 150-118. Herrin is a further 15 points behind and just five points ahead of Petersen. Fong is fifth and 80 points behind Gagne after seven races.