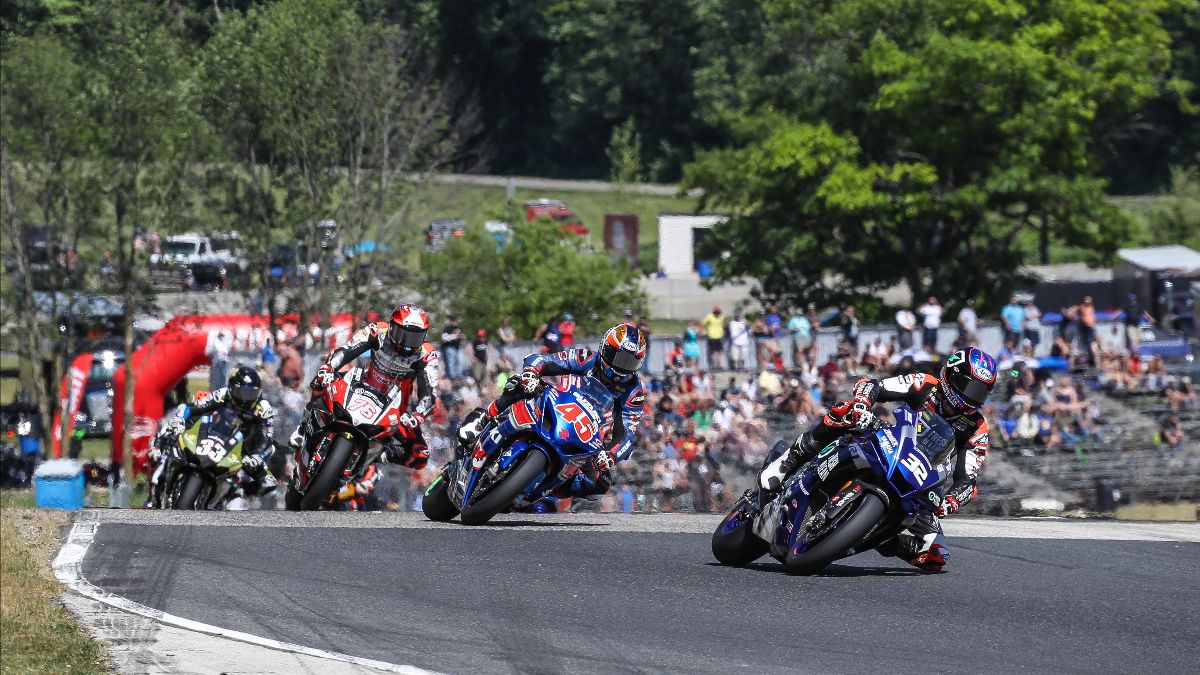 Can Anyone Stop Jake Gagne? Not In Elkhart Lake, Wisconsin

Fresh N’ Lean Attack Performance Yamaha’s Gagne won his fifth consecutive HONOS Superbike race today at Road America, the Californian sweeping the two races in Wisconsin after doing the same a few weeks ago at VIRginia International Raceway. To say he is on a roll would be a gross understatement.

Like he did yesterday, and in the three races prior to that, Gagne led from pole position into turn one, fought off the early attack from M4 ECSTAR Suzuki of Cameron Petersen and never lost the lead. Gagne’s second lap was as hot as the Wisconsin sun, a 2:10.998, while Petersen clicked off a 2:12.114.

From there Gagne ripped off a handful of 2:11s and that put him well clear of Petersen, who in turn had worked his way into a cozy second place – a spot he would hold to the finish for a career-best Superbike finish. A day after the South African earned his first Superbike podium.

“I had to,” Gagne said when asked if he’d made any changes to his race-winning Yamaha YZF-R1 from Saturday. “I know these guys are coming. We brought the bike off the truck on Friday, and it was working really well, but we know these guys are gunning for us. I knew everybody would be faster on Sunday. Everybody learns a lot in race one throughout those laps. I got off to another good start. I saw one of those Suzukis. I didn’t know if it was Cam (Petersen) or Bobby (Fong) coming into five, but I was like, ‘Man, now is the time. If I can try to get around them and try to get those first couple laps hard.’ We made the bike easier to ride today and went a little faster today, I think. Hats off to the team, man. This Fresh N’ Lean Attack Yamaha is feeling really comfortable for me. These guys are working hard. Even today, two hours before the race they had to swap a motor out of nowhere, so these guys are just hustling and hustling and hustling and they’re not making mistakes. So, I’m just trying to do my part, put the bike where it wants to be. Again, it’s good. Like Cam said, these two are some of my best buddies in the paddock so it’s fun to share a podium with them (Petersen and Mathew Scholtz). We’ll roll on to the Ridge. There’s a lot of work to do still and everybody is going to be improving every single weekend, so we’ve got to do our part and do the same.”

Petersen had a stellar weekend, finishing third in race one and second in race two.

“Honestly, I probably stayed with him (Gagne) for five turns and then he was gone,” Petersen said. “Little bit of a better race today. We had a plan and I kind of executed the plan that we had going. That was just to get a good start and try to keep Jake in sight all race. I had that carrot to chase. Luckily, I was able to do it. Midway through the race I did a couple low 12s and he was still getting away from me. So, there’s something that we need to find, all of us, the whole grid. Jake’s definitely got something special at the moment. Just super stoked to get two podiums this weekend. Road America has got a special place in my heart. Super cool to get my first podium here and then to back it up the next day is even that much more special. Hats off to these guys. I know we’re competitors, but these guys are like brothers to me. To be able to share a podium and do the whole cool-down lap together was pretty surreal. Super stoked. We’ve still got work to do, that’s for sure. We can’t let Jake keep doing this to us. He’s making us look bad. Got to find something.”

“We made pretty huge changes with the traction control just to try to drive out of the corners better,” Scholtz said. “Yesterday, we could see that the top speed wasn’t bad, but it was that third, fourth, fifth gear coming out of the corners where you were losing big time. So, we just tried to turn off the traction control, which made it really hard, but it definitely drove better. You could kind of see the lap times were better for the first couple of laps. It kind of worked out perfectly that I got past (Bobby) Fong, (Josh) Herrin, Kyle Wyman and just kind of rode my own race from there. Then with maybe four laps to go something started happening. There was liquid shooting back up at me. The clutch lever was bouncing backwards and forwards. Everything wasn’t really working well, but I managed to hold on. I didn’t even realize how close Bobby (Fong) was to me until I looked over in the final corner and just about sh*@ my pants. Happy to be third and back up here. Thank you to the Westby team. They’ve been working hard. We have our work cut out for us to try to catch up to Jake. Looking forward to this test coming up and trying to pick up speed and hook up better.”

Fong ended up a fighting fourth, some three seconds ahead of Herrin, who in turn managed to beat Scheibe Racing BMW’s Hector Barbera, the Spaniard continuing to impress in his first season of racing in the MotoAmerica Series.

Notables who failed to finish were Warhorse HSBK Racing Ducati New York’s Loris Baz and Panera Bread Ducati’s Kyle Wyman. Baz’s Panigale V4 R blew up early in the race while the Frenchman was battling with Petersen for second and Wyman crashed his Panigale late in the race.