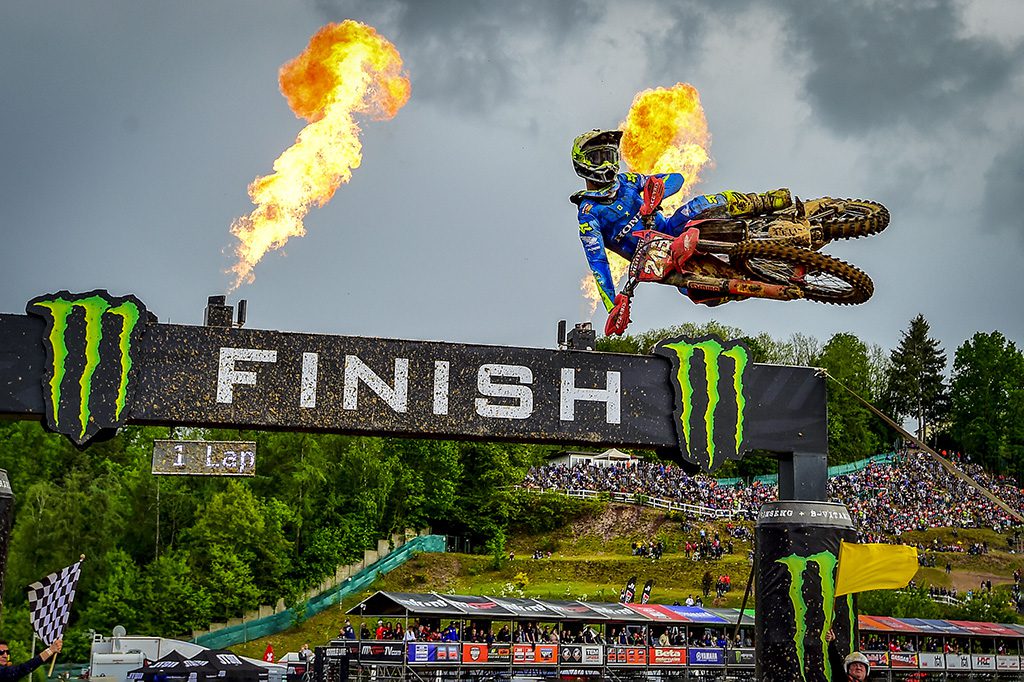 The heavy rainfall in the night and some more throughout the day made for some tough conditions but the top MXGP and MX2 stars took on the challenge and produced some intense racing that saw Stephen Rubini of Ship to Cycle Honda SR Motoblouz celebrate his first podium in MX2 and Monster Energy Yamaha Factory Racing claim a 2-3 podium with Jeremy Seewer and Maxime Renaux.

Renaux then slipped by Gajser as he took over second place on the opening lap and the pair then battled closely for much of the race, with Gajser making several attempts to pass. While the two fought for second, Vlaanderen was looking pretty comfortable in the lead, until lap six when Renaux went through and lap or so later so did Gajser.

In that time, Seewer found his way past Jonass and could then put in a couple of good laps in order to close in on Vlaanderen, Gajser and Renaux.

As the fight between Renaux and Gajser intensified, the pair came within touching distance as they almost made contact, but it was the Slovenian who came out on top and became the new race leader on lap 11.

Seewer then upped his pace as he worked his way around Vlaanderen on lap 11, after battling with the Dutchman for four laps. Towards the final laps of the race, Seewer passed Renaux and then crashed with two laps to go but managed to get going quickly to maintain second position.

Gajser won the race, Seewer was second ahead of Renaux, Vlaanderen and Jonass.

In the second race, it was Kawasaki Racing Team MXGP’s Ben Watson who secured his first Fox Holeshotof the 2022 season and led Jonass, Seewer and Gajser.

Gajser was quick to pass Seewer as Jonass took the lead away from Watson on lap two. The Brit then came under more pressure from Gajser and Seewer, and eventually dropped to fourth by the third lap.

SM Action Racing Team YUASA Battery’s Alberto Forato was looking good as he challenged Renaux for his position and eventually took fifth away from the Frenchman. He looked solid for a couple of more laps before crashing and finishing the race in 13th position.

On lap five we saw a change for the lead, as Gajser got around Jonass, while Seewer remained close. Moments later the Swiss got around the Latvian who crashed five or so laps later and dropped back to 8th.

From then on it was a steady race for Gajser, as Seewer got comfortable in second, while Watson was looking good in third. Renaux was on a mission though, as he looked to fight back and score some solid points. On lap 12 the Frenchman sensed an opportunity to get Watson and took it with both hands and solidified his spot on the box.

Gajser won the race with a 20.264 second advantage over Seewer. Renaux was third ahead of Watson and Fernandez.

Gajser went on to claim his sixth overall win of the season, with Seewer finally making a comeback on the box since Matterley Basin to secure the second spot ahead of his teammate Renaux who celebrated his fourth podium in MXGP.

With Red Bull GasGas Factory Racing’s Jorge Prado out for the Italian GP, this now means that Gajser leads by 81 points as Renaux moves into second in the championship standings ahead of Seewer who is third.

Tim Gajser: “Yeah, it was a good weekend, I was really enjoying those days. It was completely different, we had rain during the night so it was completely different and more technical let’s say. It was a good day and also good starts, then I took the time to find some nice lines to pass the guys in front of me, then could make a comfortable lead and then control the race. I really enjoyed the race and look forward to next weekend”.

Jeremy Seewer: “It took me way too long to be back on the podium which wasn’t in a very good form in the beginning of the season. You know, many things came in between. The crash in Argentina was a big setback and it took me a lot longer than I expected just to find my form again. And even now, I mean, I’ve done a good weekend, but I still feel like I can improve a lot. I’m not yet back to where I should be but there’s still a lot of racing left, we are very happy to be back on the box. And now I think I can still go step by step and improve and try, you know, to battle with Tim, because he’s on a very good level”.

Maxime Renaux: “It was a really consistent day. There’s one thing I’m really happy about this weekend is that we made a big step on the on the starts, I got three good starts, in the qualifying and both races, so that was a really good thing. Then I messed up between the first and second and second and third corner and went back to fifth and yeah, I was just not happy and satisfied about my riding in the second race. I know I can do much better and I know inside of me I still have so much left so we will try to figure it out and work hard coming into Riola Sardo next weekend”. 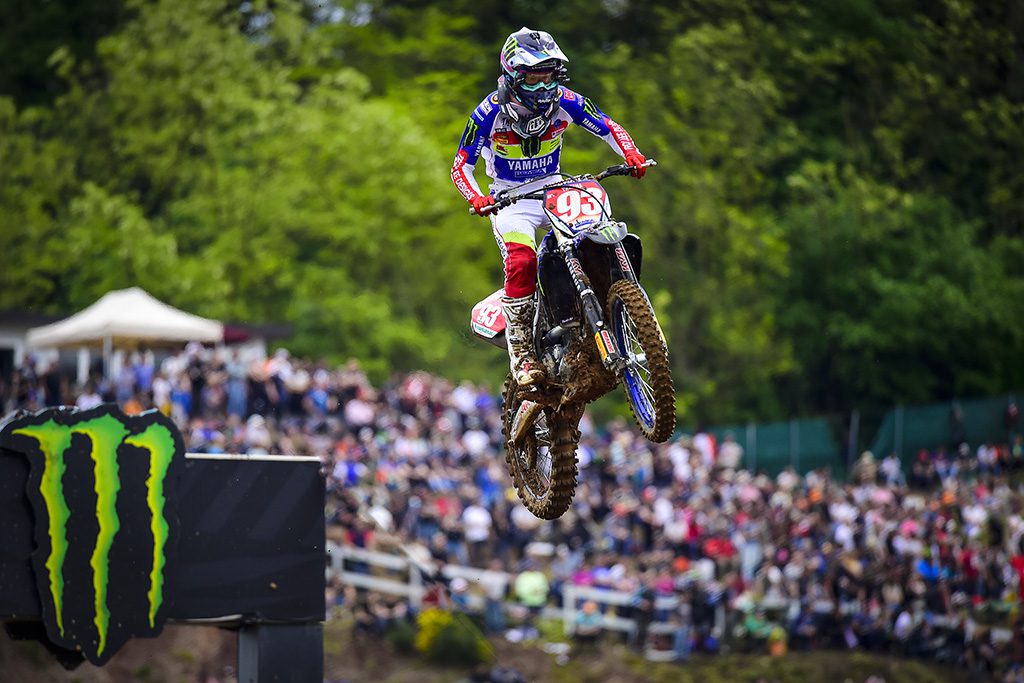 As the gate dropped for MX2 race one, the first Fox Holeshot of the weekend went to Red Bull GasGas Factory Racing’s Mattia Guadagnini who immediately crashed in the third corner and that also stopped Red Bull KTM Factory Racing’s Tom Vialle in his tracks and allowed Monster Energy Yamaha Factory Racing’s Jago Geerts into the lead!

Rubini then moved into second place as Guadagnini crashed once more. The Italian did not finish the rest of the race.

Everts then passed de Wolf to move into fifth place, as Gifting passed Karssemakers. The Dutchman then crashed which allowed Everts to move into fourth.  By that point Vialle was in seventh and catching up to de Wolf and the pair then battled intensely.

While at the front of the field, Rubini was looking impressive and was the fastest rider on the track for a while. The Frenchman consistently improved upon his lap times as he closed the gap to Geerts. This is when backmarkers started to play their part, as Rubini got help up which allowed Geerts to pull away.

At around the mid-way stage of the race, Everts found himself in the sights of de Wolf which meant that he could not afford any mistakes or a moment to relax. Eventually on lap 12, de Wolf was able to get by Everts, though crashed just two laps after that which handed fourth place back to Everts. By that point Vialle also picked up the pace as he got within striking distance of Everts.

In the end, Geerts went on to win race one with Rubini crossing the line in second place ahead of Gifting, while Everts kept Vialle at bay to secure fourth.

In race two, the Fox Holeshot went to Karssemakers who led Vialle, Geerts, de Wolf and Red Bull GasGas Factory Racing’s Simon Längenfelder. de Wolf dropped down to seventh as Längenfelder got by and so did Adamo and Guadagnini.

Geerts and Längenfelder then got by Karssemakers, as Längenfelder set the fastest lap of the race and looked to close the gap down between him and the Belgian ahead of him.

Adamo was next to go after the Hitachi KTM fuelled by Milwaukee of Kay Karssemakers but pushed too hard and crashed. The Italian got going again in 11th but then slipped down to 16th by the end of the race.

Big Van World MTX Kawasaki’s Mikkel Haarup, Rubini and F&H Kawasaki Racing’s Kevin Horgmo were locked in a close battle for seventh as they pushed their way closer to Guadagnini and de Wolf just ahead. Karssemakers was still ahead, with de Wolf pushing to get by but a mistake saw him drop to fifth, with Rubini and Haarup looming in his shadow.

Eventually de Wolf was able to get himself into fourth, as Karssemakers found himself being urged on by Rubini. As the Frenchman focused on the KTM rider ahead of him, Haarup was able to seize his own opportunity to get by, catching Rubini off by surprise, as did Horgmo who shortly after passed him too.

Back with the leaders, Geerts kept things close to Vialle who was still the rider in the lead. In the final few laps the Belgian really stepped up his game as he applied the pressure onto his championship rival, though it was not enough to spook Vialle who ended up winning the race. Geerts was second, Längenfelder third, de Wolf finished fourth ahead of Haarup.

A 1-2 result of Geerts, compared to Vialle’s 5-1 gave Geerts the overall victory, with Vialle second on the box ahead of Rubini who celebrated his first ever podium in the world championship.

As it stands, Geerts leads the MX2 Championship with a 6-point advantage over Vialle. Längenfelder is third, five points ahead of de Wolf and Haarup who are tied on points in fourth and fifth.

Jago Geerts: “Yeah it was a really good day for me. First race, I got a good start and I was feeling good. Didn’t make too many mistakes. And then the second heat, in the first 15 minutes I was struggling a bit with the track, but after that I found some good lines and in the end had a battle with Tom but I finished second. Really happy about today and looking forward to the next race in Sardegna”.

Tom Vialle: “I couldn’t do so much; I didn’t have a bit of luck in the first race. I had a good start but then Mattia went on the inside, then into my rut and the bike turned around for him, so I was stuck and dropped quite a few positions. I was pretty far behind but came back to fifth. In the second race, I didn’t get the holeshot but I was first, Jago was pushing really hard in the end but I could manage to win the second race so I’m quite happy. There’s some positives to take away”

Stephen Rubini: “It was a really positive weekend, especially today on Sunday. We managed to do two good starts and to battle in the front is just so nice. It’s finally where I wanted to be, fighting at the front in the first race, putting in some good laps and catching up to Jago. And actually, after the second race I didn’t know I was on the podium until my friends told me and I was just relieved to know, it’s been quite a few long years. And I’m happy to finally be where I want to be”.