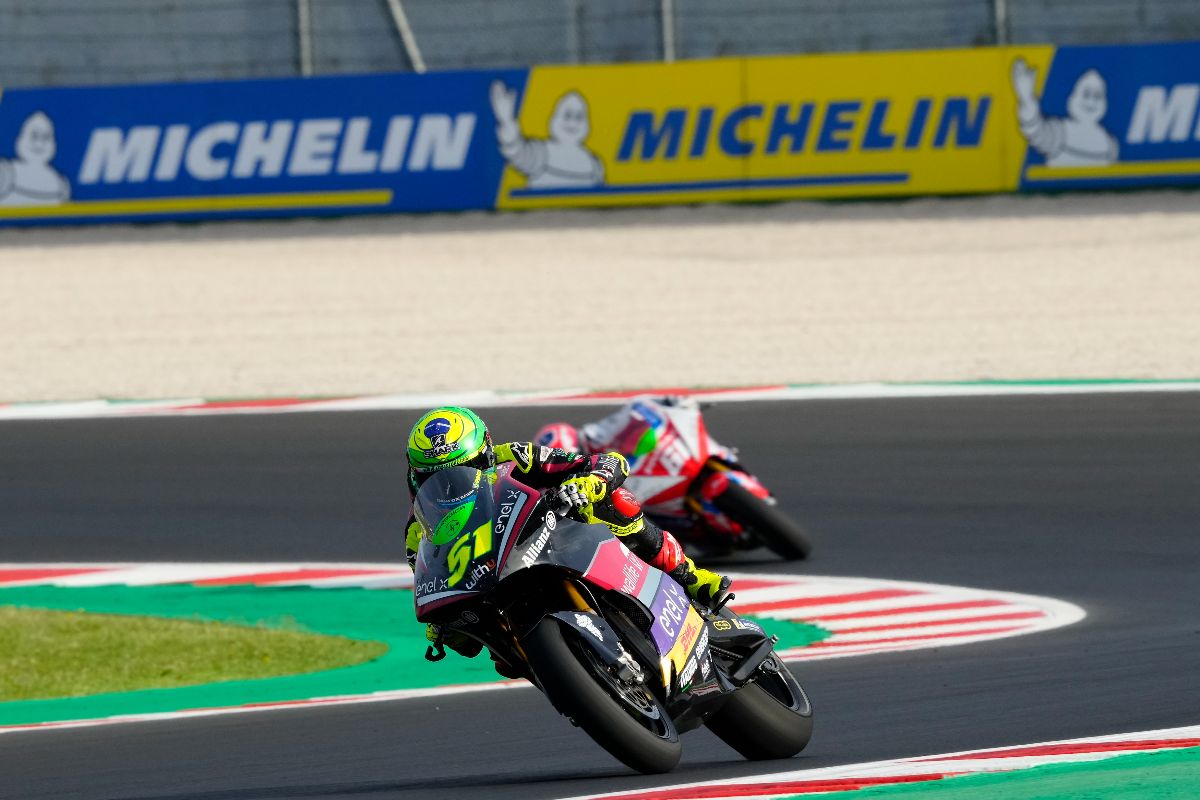 The top three in the standings are the top three overall, with rain ahead of FP2 bringing the intrigue on Friday.

A mixed day at Misano saw Eric Granado (One Energy Racing) top the timesheets after the Brazilian was fastest out the blocks at the FIM Enel MotoE™ World Cup season finale, setting a 1:43.883 to head the pile by the end of play. Fellow contender and reigning Cup winner Jordi Torres (HP Pons 40) was second, around a tenth in arrears, with 2021 points leader Alessandro Zaccone completing the top three. As rain came down ahead of FP2, no one could improve so it’s the top three overall in the top three, although shuffled, on the Friday timesheets. Game on!

FP1
Two riders broke the 1:43 barrier in FP1, and the two riders on the chase behind points leader Zaccone: Granado did a 1:43.883 and Torres a 1.43.973. The Spaniard was also first out. Zaccone was third though, the Italian showing more good speed at the final round of the season.

Miquel Pons (LCR E-Team) was back on song in fourth, with Dominique Aegerter (Dynavolt Intact GP), fourth in the standings, close behind to complete the top five.

There was one crash in the session as Andre Pires (Avintia Esponsorama Racing) went down at Turn 14, rider ok.

FP2
After rain before the session, the track was wet and conditions didn’t improve enough to allow anyone to improve on the timesheets either. Pons was fastest with a 1:53.003, with Torres 0.386 back and Fermin Aldeguer (Openbank Aspar Team) another half second in arrears. Lukas Tulovic (Tech3 E-Racing) was fourth, just over a second off Pons’ stunner at the top, with Granado completing the top five. Zaccone was 8th in the wet and Aegerter 11th. So if it rains in the races or in E-Pole…

There were no incidents in the afternoon.

Combined timesheets
Granado, Zaccone and Torres head the timesheets from Pons and Aegerter, with Hikari Okubo (Avant Ajo MotoE) in sixth. No gap from P3 to P6 was bigger than a tenth.

‘King of Misano’ Matteo Ferrari (Indonesian E-Racing Gresini MotoE) started well but was pushed down to seventh by the end of FP1, ahead of Aldeguer and Tulovic. The returning Mattia Casadei (Ongetta SIC58 Squadracorse) completed the top ten.

An intriguing Day 1 leaves a good few questions still to be answered in E-Pole and when the lights go out to race. Rain or dry, you don’t want to miss it! MotoE™ head out for E-Pole at the earlier time of 11:45 (GMT +2) at Misano World Circuit Marco Simoncelli to decide the final grids of the season, and then hold onto your hats as Race 1 powers up at 16:20 for the first of two pivotal showdowns on the Riviera di Rimini.