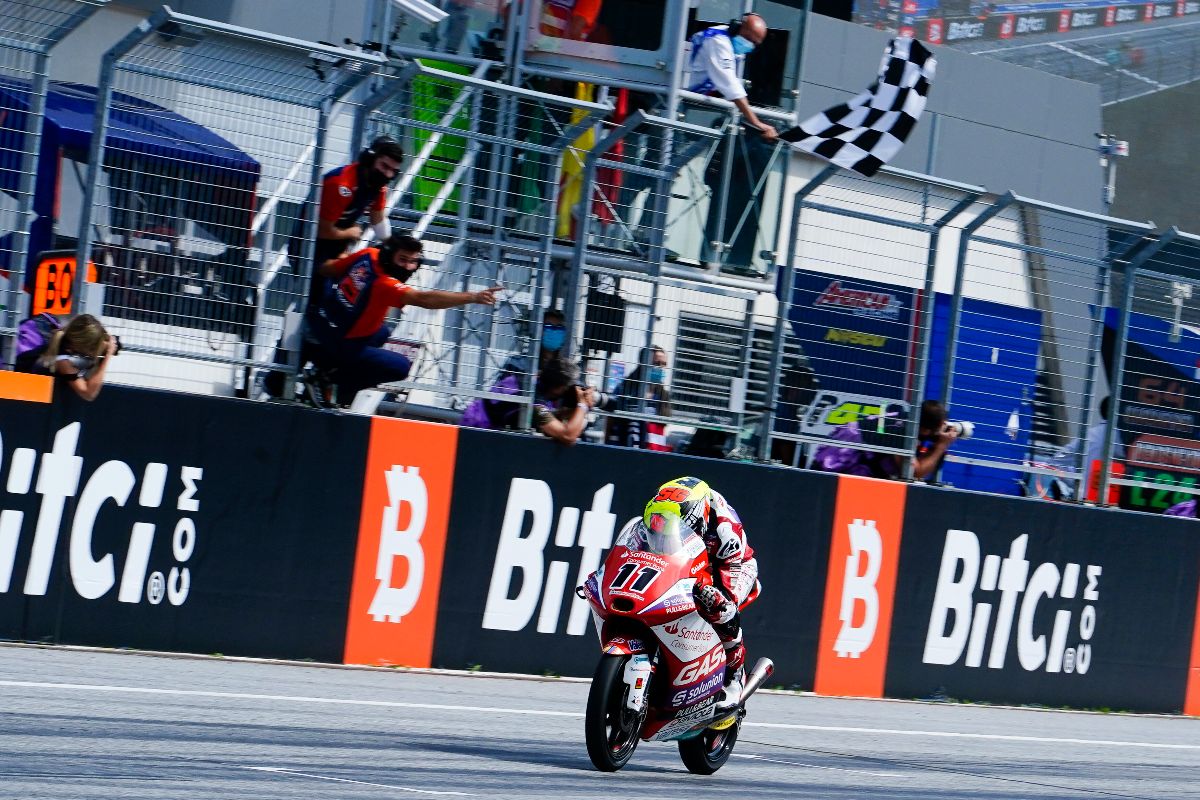 A week on from crashing and remounting into second, the Spaniard needed no redemption but pushed for some anyway – taking a third win of the season ahead of Öncü and Foggia.

Sergio Garcia (Santander Consumer Bank GASGAS Aspar Team) is back on top! A week on from the stunning duel for victory in the Styrian GP, the Spaniard came out swinging to fight his way to a third win of the year, just holding off Deniz Öncü (Red Bull KTM Tech3) as the Turk got back in the front fight. Dennis Foggia (Leopard Racing) completed the podium in more good news for Garcia, as the Italian pipped Styria winner and Championship leader Pedro Acosta (Red Bull KTM Ajo) on the final lap.

Romano Fenati (Sterilgarda Racing Team) took the holeshot from pole, the Italian absolutely nailing it to escape with a little breathing space. But Öncü was soon on the chase to cut the gap, and initially the two were joined by Acosta in a breakaway at the front. Little by little the chasing group, led by Garcia, hunted them down, however… and by third race distance a lead group of six had formed: Fenati, Jaume Masia (Red Bull KTM Ajo), his teammate and points leader Acosta, Öncü, Garcia and Foggia, with Petronas Sprinta Racing’s Darryn Binder and John McPhee in a chasing duo. Binder also had an incident with Ayumu Sasaki (Red Bull KTM Tech3), with no action taken but the Japanese rider going down as some bad luck bit again.

By 12 to go, the Petronas Sprinta racing riders were on the scene, and the freight train was eight. Acosta also got a track limits warning with plenty of laps remaining to add a few more nerves, but Öncü, Masia, Acosta, and Fenati remained the key front four as the laps ticked down. And as the laps ticked down further, Binder and McPhee started to fade slightly too, with a gap reopening in front of the two Petronas bikes.

Izan Guevara (Santander Consumer Bank GASGAS Aspar), meanwhile, was going the opposite way: forwards. The rookie was the fastest man on track with 4 to go, and had homed in on Binder and McPhee. And he then pulled the two back towards the front group again as well, re-forming a freight train.

With 3 to go though, Garcia suddenly made a bigger move. The number 11 went from calmly sitting just behind the front few to striking for the lead, and Acosta reacted. He hit back, and then the pin was pulled. Öncü also felt the hurry up and got his elbows out, and the Turk was able to take the lead back from both, not content to watch the duel from afar one week on.

Heading onto the last lap, Öncü led Acosta with Garcia third, and the number 37 attacked for the lead at Turn 3. But Öncü held firm and the Championship leader had a foot off the peg, the move also dropping him into the clutches of Garcia. The Aspar rider didn’t need more of an invite to the elbows-out party, pushing through into second not long after as Acosta had another moment, a little off line, leaving him on the defensive.

With the corners running out, Garcia was homing in on Öncü. And at Turn 9 the number 11 struck, muscling his way through, cleanly, to leave only Turn 10 and the drag to the line. And Öncü tucked in to try and take him back, but it wasn’t to be as Garcia’s stunning ride up from P13 on the grid was completed with a win and an important one in the standings, as well as his third of the year. Öncü was just 0.027 off over the line, the Turk defeated for victory but taking his second Grand Prix podium.

Foggia attacked Acosta in unison with Garcia’s move on Öncü on the final lap, and the Leopard Racing rider kept that to the line too, defeating the Championship leader by 0.048. Fenati took fifth, with Masia the last of the first front group over the line in P6.

McPhee got past Guevara for seventh, but the rookie nevertheless impressed with his eighth place, holding off Darryn Binder.

Kaito Toba (CIP Green Power) and Tatsuki Suzuki (SIC58 Squadra Corse) duelled for tenth, with the former just coming out on top. Filip Salač (CarXpert PrüstelGP) and Stefano Nepa (BOE Owlride) had their own fight just behind for 12th, finishing in that order.

That’s it from Austria, and now it’s time for the very different challenge of Silverstone circuit. Can Acosta strike back? Does Garcia have the momentum? Or will the more veteran riders in the field have something in their pocket as the sport returns to British shores? We’ll find out in two weeks…

Sergio Garcia: “What a beautiful race for me! At the beginning was very difficult because the pace was very strong, but I pushed very hard to the limit, until the last moment and last corner, and got the victory, here in Austria. It’s amazing!”