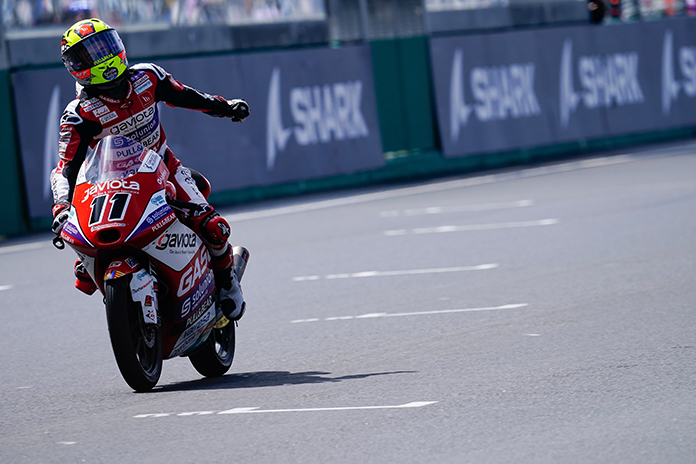 The Spaniard takes the glory with a supreme charge to the front, ahead of a first podium for Salač and Rossi as the weather mixes up the field in France

Sergio Garcia (Gaviota GASGAS Aspar Team) put in an absolute stunner on race day at the SHARK Grand Prix de France, the Spaniard making his way through to lead early on in difficult conditions and nothing able to stop him from there. It’s his second Grand Prix win, his first for GASGAS and the marque’s first victory since joining Moto3™ this season. P2 went to Filip Salač (Rivacold Snipers Team) as the Czech rider proved the only man able to push Garcia to the flag, ultimately forced to settle for second, with front row starter Riccardo Rossi (BOE Owlride) completing the podium for his first career rostrum finish to top off an impressive weekend at Le Mans.

Andrea Migno (Rivacold Snipers Team) took the holeshot from pole, but after a few corners of shuffle it was Niccolo Antonelli (Avintia Esponsorama Moto3) in the lead. Not long after though, the dream was over early as the Italian crashed out, soon followed by Tatsuki Suzuki (SIC58 Squadra Corse) and Jeremy Alcoba (Indonsesian Racing Gresini Moto3). Then it was drama time for Jaume Masia (Red Bull KTM Ajo), and the biggest earthquake then came for his teammate Pedro Acosta. Up from outside the top 20 on the grid, the Spaniard then overcooked it and went down, but he was up quickly as he slotted back in pretty much where he started in P21.

Ahead of the drama, two riders had emerged in the early lead: Garcia and Salač. With three seconds in hand back to Rossi in his own little bit of clear air, it wasn’t plain sailing but the two pounded on. After a couple of wobbles, Garcia started to make his own gap too…

Rossi was being chased by Ayumu Sasaki (Red Bull KTM Tech3) and John McPhee (Petronas Sprinta Racing), with a big group then fighting for sixth – and Acosta back in that. More drama hit not long after for one of the Spaniard’s key points rivals too, as Darryn Binder (Petronas Sprinta Racing) tumbled out from the front of the freight train fighting for sixth. The South African rejoined but right at the back, and with quite a gap. That left rookies Adrian Fernandez (Sterilgarda Max Racing Team) and Xavier Artigas (Leopard Racing) heading that group… the two up from the very back of the grid after an incredible charge through the chaos.

Meanwhile at the front, with 10 to go Garcia overcooked it at Turn 8 and headed wide, the Spaniard carefully getting straight back onto the racing line but Salač able to slice through to lead. It didn’t last long though, Garcia gathering it back up and soon taking over again – once again, pulling out a gap.

It would stretch and then Salač would pull it back, but by the last lap the Spaniard had 1.9 in hand and just one more tour of Le Mans to the top step. And he kept it calm in style to take his second ever Grand Prix win and the first Moto3™ win for GASGAS, a true masterclass from early doors to the flag. Salač impressed for second and his first podium, with Rossi setting the fastest lap on his last lap to stay out of the clutches of McPhee.

The Scot put in a late charge as he got past Sasaki and started to reel in the podium, but had to settle for fourth in the end. After a run of bad luck though, that’s the Scotsman’s first points of the season. Sasaki continued his run of fast consistency in 2021 to come home fifth.

Fernandez took his best ever result with a stunning charge to sixth, coming home top rookie just ahead of fellow debutant Artigas. The two came from the very back to cross the line almost neck and neck. Next up was another rookie: Acosta. The Championship leader sliced back into the fight for the top ten after his early crash, and took eighth and eight points – a good recovery, and enough to extend his points lead given the drama around him.

After a dramatic damp Sunday at Le Mans then, Acosta remains in the lead and even extends it after his recovery to P8. Now though it’s Garcia closest on the chase in an expensive day in the standings for many… what will Mugello bring? We’ll find out in two weeks.

Sergio Garcia: “I feel very good! Because this victory was a very difficult victory, the track conditions were changing during the whole race but I kept focused and concentrating to win the race and I think this is the target! The track was really drying. I’m very happy with my ride, I pushed very hard to the limit. And this victory is for my team and my family.”

Lowes wins, Raul Fernandez crashes out as drama hits for Moto2 at Misano