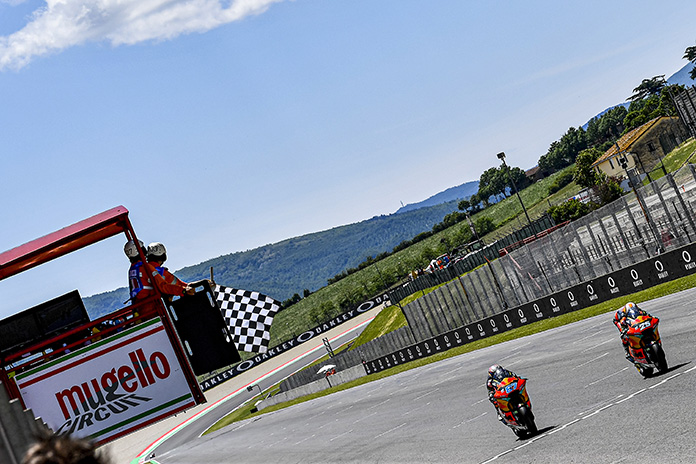 The Red Bull KTM Ajo riders duel for victory as Lowes crashes out and Bezzecchi completes the podium.

The two Red Bull KTM Ajo riders were 1-2 from the off as Fernandez took the holeshot and Gardner moved up into second, and Lowes dropping a few places. Fernandez then began to get his head down and slowly streak clear of Gardner, with Lowes clawing his way back up to the back wheel of the Australian. The trio had stretched clear of the chasing pack, and the Brit passed Gardner for P2 on Lap 10 after a quality exchange between the two.

Fernandez’s lead was up to 1.9s at one point, but Lowes and Gardner reeled the rookie in, with the number 22 getting to within 0.8s. Then a costly crash at Turn 8 ended Lowes’ race with six laps to go. Gardner kept homing in though and with three laps remaining, it was clear the Australian would be able to create a chance against his teammate. On the last lap, Gardner struck at Turn 10 and fended off Fernandez on the drag to the line to win his first race of 2021, extending his lead to six points ahead of Round 7.

Bezzecchi’s podium is his third in a row, and one that keeps him P3 in the title race. Roberts was disappointed with P4 after crossing the line third, but it was a great ride from the American. Marcel Schrötter’s (Liqui Moly Intact GP) fifth place is his best finish of the year, rookies Ai Ogura (Idemitsu Honda Team Asia), Tony Arbolino (Liqui Moly Intact GP) and Cameron Beaubier (American Racing) – from 26th on the grid – claim impressive results in P6, P7 and P8 respectively.

The Moto2™ riders will be back in action next weekend at the Circuit de Barcelona-Catalunya.