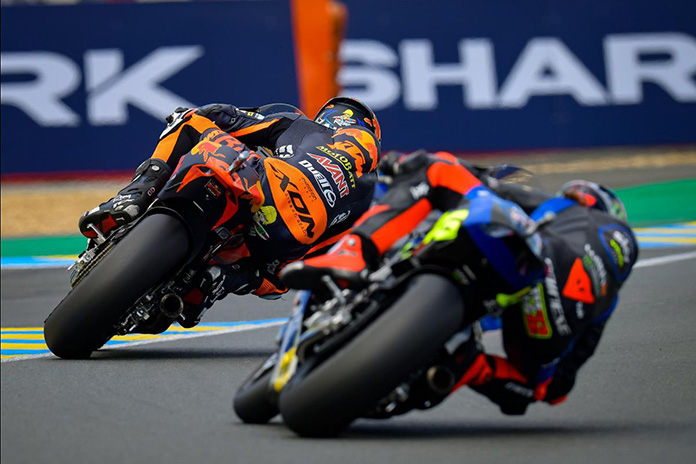 The Australian hasn’t won yet this season, Fernandez has less laps at the venue and the home heroes want to strike back… what awaits for Moto2™?

After another stunner from Raul Fernandez (Red Bull KTM Ajo), the Moto2™ rookie is now just a single point behind his veteran teammate atop the Moto2™ standings as the paddock heads for Mugello. But given its absence on the 2020 calendar, the Tuscan venue is one where Fernandez has quite a few fewer laps than his rivals: he’s only raced there as a Moto3™ rookie in 2019. The Spaniard came home 11th, however… already proving his CV as a fast learner. So will he be leading from the front or playing catch up this time round?

His teammate Remy Gardner will be pushing to make sure it’s the latter. The Australian is on a supreme run of form stretching back to even before the start of 2021, and that’s exactly how he finds himself at the top of the table. With his rookie teammate proving such a force to be reckoned with, already winning two races, Gardner knows he has to strike when Fernandez is on the back foot and take the maximum points when he isn’t. So far so good on both counts, but Mugello will be another test of his so far exemplary judgments on Sundays.

Waiting in the wings there are two riders with even more motivation at this particular racetrack, however: Marco Bezzecchi (Sky Racing Team VR46) and Fabio Di Giannantonio (Federal Oil Gresini Moto2). The former is on a podium run and the latter already a race winner this year, but both will want victory on home turf. Bezzecchi hasn’t had all the pieces come together perfectly so far this year but is proving super consistent since we left Qatar, whereas Diggia is somewhat the opposite. The Gresini rider created himself a new postcode in the lead at Jerez to win his first Moto2™ race in style, adding to a podium first time out in 2021, but in the other three races it’s been up and down. Can the home heroes make a push for the front again?

For Sam Lowes (Elf Marc VDS Racing Team) meanwhile, it’ll be a different challenge. The Brit bounced back well from a DNF in Portugal and said it was important to do so, with no OTT heroics and solid points. That will likely be the mission as he aims to hit back at Mugello following a crash in France: take points. Get on or near the podium. Claw back a little deficit. But the Brit is also one of the fastest men in the intermediate class on any given Sunday, so he can’t be counted out.

The next two riders in the standings likely have similar goals though: Joe Roberts (Italtrans Racing Team) crashed from the front in France and Aron Canet (Kipin Energy Aspar Team) earlier than that, although they’re holding on as the next two in the standings after the fastest five so far this season. What can they do? Marcel Schrötter (Liqui Moly Intact GP) is now equal on points with Canet too, and the German will want to build momentum after a solid result.

Recent Mugello history also says Augusto Fernandez (Elf Marc VDS Racing Team) could be up there in the top five again, and he’ll want some redemption after Le Mans followed some good steps forward, but speaking of… the king of those in France must surely be Tony Arbolino (Liqui Moly Intact GP). Le Mans was a stunner from the rookie Italian, so has he got more in the locker at Mugello on home turf?

Gardner has the consistency and the experience. Raul Fernandez is a fast learner. Bezzecchia and Diggia want some home turf glory, and Sam Lowes needs some good points. Who’ll come out on top? Mugello puts plenty on the line in Moto2™, so make sure to tune in at 12:20 (GMT +2) on Sunday!