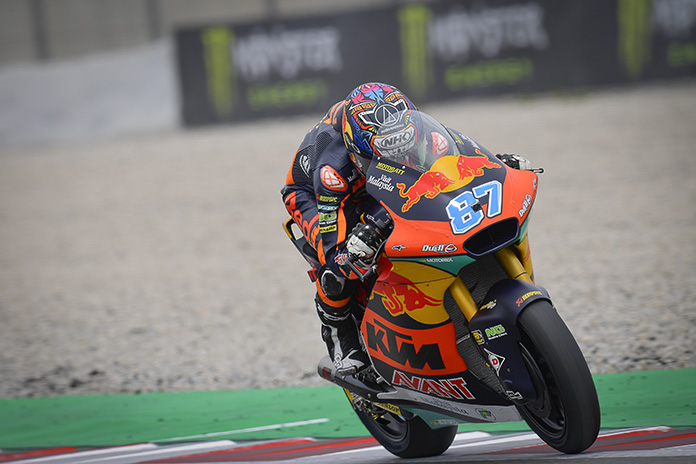 The Australian beats rookie teammate Raul Fernandez to the top, with Bendsneyder impressing in third.

Q1
Jorge Navarro (MB Conveyors Speed Up) came out on top in Q1, the Spaniard having a tougher weekend of it so far, and that’s also true of the man who followed him through: Fabio Di Giannantonio (Federal Oil Gresini Moto2), who suffered a mammoth highside in FP3. But both got the job done, and were joined by Somkiat Chantra (Idemitsu Honda Team Asia) and Nicolo Bulega (Federal Oil Gresini Moto2), the latter coming back from his shoulder injury sustained in Mugello.

Q2
The Red Bull KTM Ajo superiority was on show again as Gardner and Raul Fernandez exchanged P1 a couple of times, but the Australian was able to just take it by the end with a new lap record just under the 1:43 barrier – stretching his advantage from 0.036 to over a tenth. Bendsneyder was 0.265 off Raul Fernandez in second place, but the Dutchman had a tenth in hand over the fourth-placed Fernandez: Augusto (Elf Marc VDS Racing Team). His teammate, Sam Lowes, had a more muted Saturday to take eighth.

The Grid
Gardner vs Raul Fernandez rolls on with Bendsneyder alongside, and Augusto Fernandez heads Row 2 from Di Giannantonio as the Italian bounced back in style to take fifth. Xavi Vierge (Petronas Sprinta Racing) takes sixth on home turf to complete Row 2, ahead of rookie Ai Ogura (Idemitsu Honda Team Asia). The Japanese rider heads Lowes and Chantra on the third row.

Behind them comes a surprising P10 for Marco Bezzecchi (Sky Racing Team VR46), the Italian one of those most definitely looking for more on Sunday, and the same can be said for Joe Roberts (Italtrans Racing Team) as the American will start P17.

That’s it from Saturday, with Gardner in the driving seat… for now. Will another duel on Sunday change the momentum again? Find out at the later time of 14:30 (GMT +2).

Remy Gardner: “It’s a good day, I’ve had worse days! It’s always nice to start from pole but the race is tomorrow. It’s nice to get a watch but tomorrow is when the points count! I had to push hard to beat Raul but I managed it in the end.”