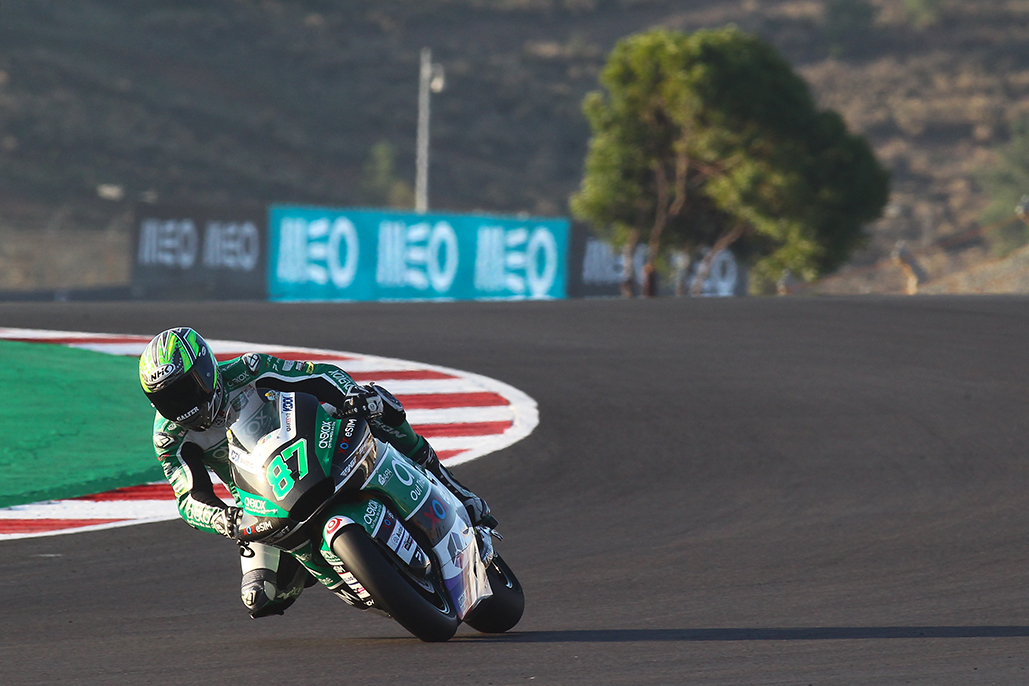 The Aussie heads Marini, with Bastianini fourth, Lowes fifth and Bezzecchi down in 12th ahead of pivotal Sunday

In Q1 it was all eyes on Bezzecchi as the man fourth overall – who needs to win to have any chance at the crown – found himself on the back foot, but the Italian moved through with Bo Bendsneyder (NTS RW Racing GP), Jorge Martin (Red Bull KTM Ajo) and Nicolo Bulega (Federal Oil Gresini Moto2) joining him, the fight for the top 18 on.

Job done for Bezzecchi, Q2 began. Right at the start, there was drama at the exit of Turn 8. Aron Canet (Pull&Bear Aspar Team Moto2) crashed and slid down the hill but thankfully, no one collected the Spaniard or his stricken Speed Up machine; disaster avoided.

Q1 graduate Bulega sat top of the tree in the opening stages before Augusto Fernandez (EG 0,0 Marc VDS) then took over, but it wasn’t long until some key title contenders began a charge. Marini was first of them to the summit before injured Lowes produced a wonderful 1:42.759 to go provisional pole instead. Fernandez made it an EG 0,0 Marc VDS 1-2 with seven minutes to go, before Hector Garzo (Flexbox HP 40) shoved Marini off the front row. However, the man third in the title race was on a flyer: three red splits came before an orange fourth sector for Marini put the VR46 Academy rider in P2. On his next lap, Marini changed the number next to his name to a one to take back provisional pole.

The new time to beat was a 1:42.710 with just over two minutes to go, with Bastianini floundering down in P16. Lowes pulled into pitlane sitting P3, his afternoon’s work seemingly done as the Brit waited to see how the dice would roll.

That’s when Gardner struck as the Aussie then suddenly shot to pole, but there seemed to be an absolute stunner coming in from Di Giannantonio. The Italian was three tenths under and looked like he would challenge, but Gardner’s stunner of a final sector was a gauntlet thrown down too far for the Italian. He ultimately stayed third as Bastianini began his comeback just down the road.

The Italian improved to eighth to leap up into at least a better postcode, but he wasn’t done yet. Despite the enormous pressure, the Championship leader kept it calm and collected to improve yet again on his final lap. It looked to challenge for pole as the ‘Beast’ was 0.004 off in Sector 3, but over the line the number 33 slotted into fourth. A job well done and, crucially, ahead of closest challenger Lowes.

That was it, and no one had an answer for Gardner. The Australian bags his second pole of the season and his fourth front row of 2020 to beat Marini as the Italian returns to the front row for the first time since his Catalan GP pole. Di Giannantonio will line-up on the front row ahead of the top two in the title race: Bastianini and Lowes. Three of the top four will battle it out on Sunday from the front so the stage is set for an absolute thriller!

Martin comes through Q1 to pocket a second row start in P6, the Valencia GP winner edging out Bulega by 0.047 seconds. The latter will spearhead the third row and is joined by Fernandez and Marcos Ramirez (Tennor American Racing), with Tetsuta Nagashima (Red Bull KTM Ajo) completing the top 10. Garzo was 11th ahead of the final title contender: Bezzecchi. The Italian came through Q1 and will start from P12 in an outside bid to claim the World Championship on Sunday afternoon, the race a true hero or zero as he has to win to stand any chance at the crown.

Four riders, 23 points, one race and one World Championship. Points leader Bastianini is in a good position, but anything can still happen. Tune in for absolute thriller of a Moto2™ race as we witness a Champion being crowned from 12:20 (GMT).

Remy Gardner: “The fourth sector has been positive for us all weekend! We struggled yesterday a bit in Sector 3 so we studied telemetry and the videos really hard, we managed to improve Sectors 2 and 3. Sector 1 we’re not the strongest yet, hopefully tomorrow morning we can find a little bit more in Sector 1, maybe change my riding a bit through Turn 1. But I knew if I could get to Sector 3 at +0, I could get pole because Sector 4 is quite good for us. The team worked really well over the last two day, I love the track, it’s just so much fun and I enjoy riding the bike every lap round here. It’s a good starting position for tomorrow, let’s see what we can do and hopefully finish back on the podium to give the team the result they deserve.”