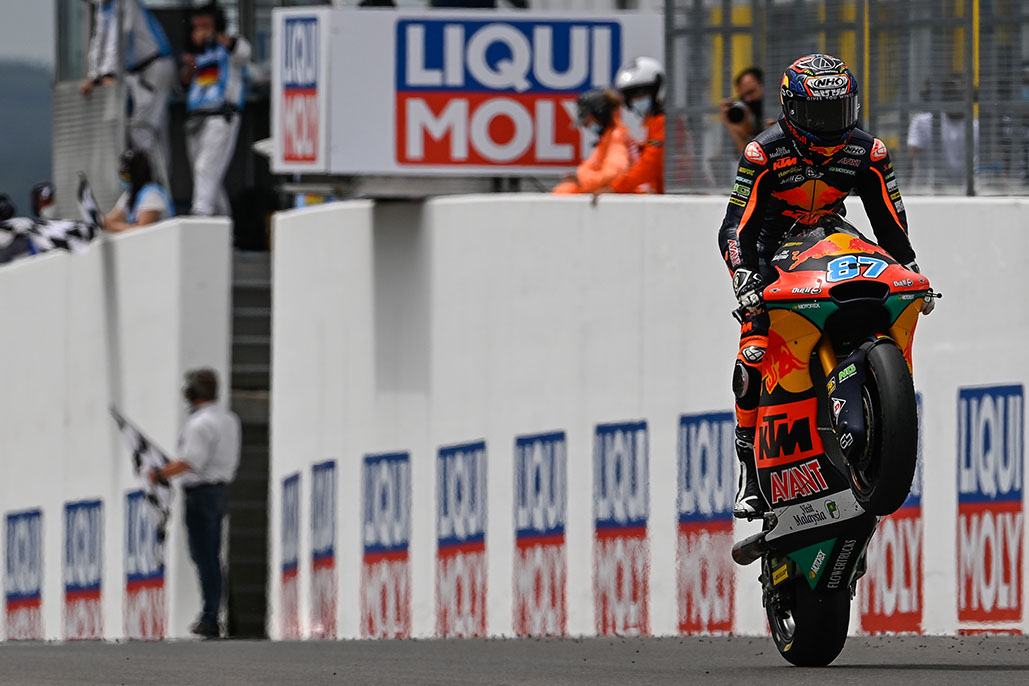 The Championship leader is the first Australian to win three in a row in the intermediate class, as well as the winner of Moto2™ race number 200

Remy Gardner (Red Bull KTM Ajo) waited a little while to take to the top step in 2021, but the Australian has now done it three times in a row and is the first from his nation to do so. Another imperious performance saw him enjoy what looked almost like a track day at the Sachsenring, with teammate Raul Fernandez initially on his tail before sliding out. Aron Canet (Aspar Team Moto2) returned to the intermediate class podium in second, with Marco Bezzecchi (Sky Racing Team VR46) locking out the rostrum in third.

As the lights went out it was Fernandez and Gardner who got the jump down into Turn 1, whilst Fabio Di Giannantonio (Federal Oil Gresini Moto2) got a terrible getaway and was left mired down in fifth. Xavi Vierge (Petronas Sprinta Racing) was up to third ahead of Bezzecchi, who held position from his starting place. It was also a good start from Jorge Navarro (+EGO Speed Up), likewise holding his position from the start of the race.

It became clear from the early stages that the race would be between the two Red Bull KTM Ajos, with Fernandez leading until Gardner got ahead of him at Turn 12 on Lap 2. Whilst both were racing away at the front at a rate of around a second a lap, it would be a mistake that would see the title pendulum swing in favour of Gardner: suddenly, Fernandez tucked the front at Turn 3. The rookie faltered for the first time in 2021 and the Australian was left to race against concentration, and himself. Crossing the line for his third win in a row with some real breathing space, he got the job done and now leads by 36 points over Fernandez in the standings…

Canet was left in second and the Aspar rider pushed to stay there, with a big gap slowly but surely diminishing as the race went on. Bezzecchi was the man on the chase but just came up a second short, nevertheless taking the podium after repelling the attentions of Di Giannantonio, who was forced to settle for fourth.

The final lap also saw numerous positions squandered, as Xavi Vierge (Petronas Sprinta Racing) crashed out of sixth place at Turn 1. Then, further down the order, Joe Roberts (Italtrans Racing Team) crashed from 11th, also at Turn 1. Then, at Turn 8, it was Ai Ogura (Idemitsu Honda Team Asia) who crashed out from fifth, promoting Lowes vs Schrötter.

There was also drama for Augusto Fernandez (Elf Marc VDS Racing Team) and Jake Dixon (Petronas Sprinta Racing) earlier in the race as the two collided at Turn 12, resulting in Dixon running off and Fernandez going down.

Moto2™ will return at the TT Circuit Assen… can Gardner make it an incredible four in a row?

Remy Gardner: “Before the race my brother messaged me, ‘yo go win it today! You’ll be the first Australian to win three consecutively in the intermediate class!’ I guess I’m making history so that’s cool! Honestly I expected a hard battle today, Raul’s been really strong all weekend, I thought Diggia would be there, I don’t know what happened. Especially in Warm Up Raul had better pace than me so I was expecting a good long fight. I knew Raul would struggle a bit with the front tyre but I saw I had a bit more pace in the first laps so I passed him and just tried to go, but being smooth. Then a few laps later I saw plus 4 and a half, or something like that, and I was just trying then to not lose concentration. It was a really long race, a lot of laps around here. Happy to get those 25 points, it was an extremely important day for us.”