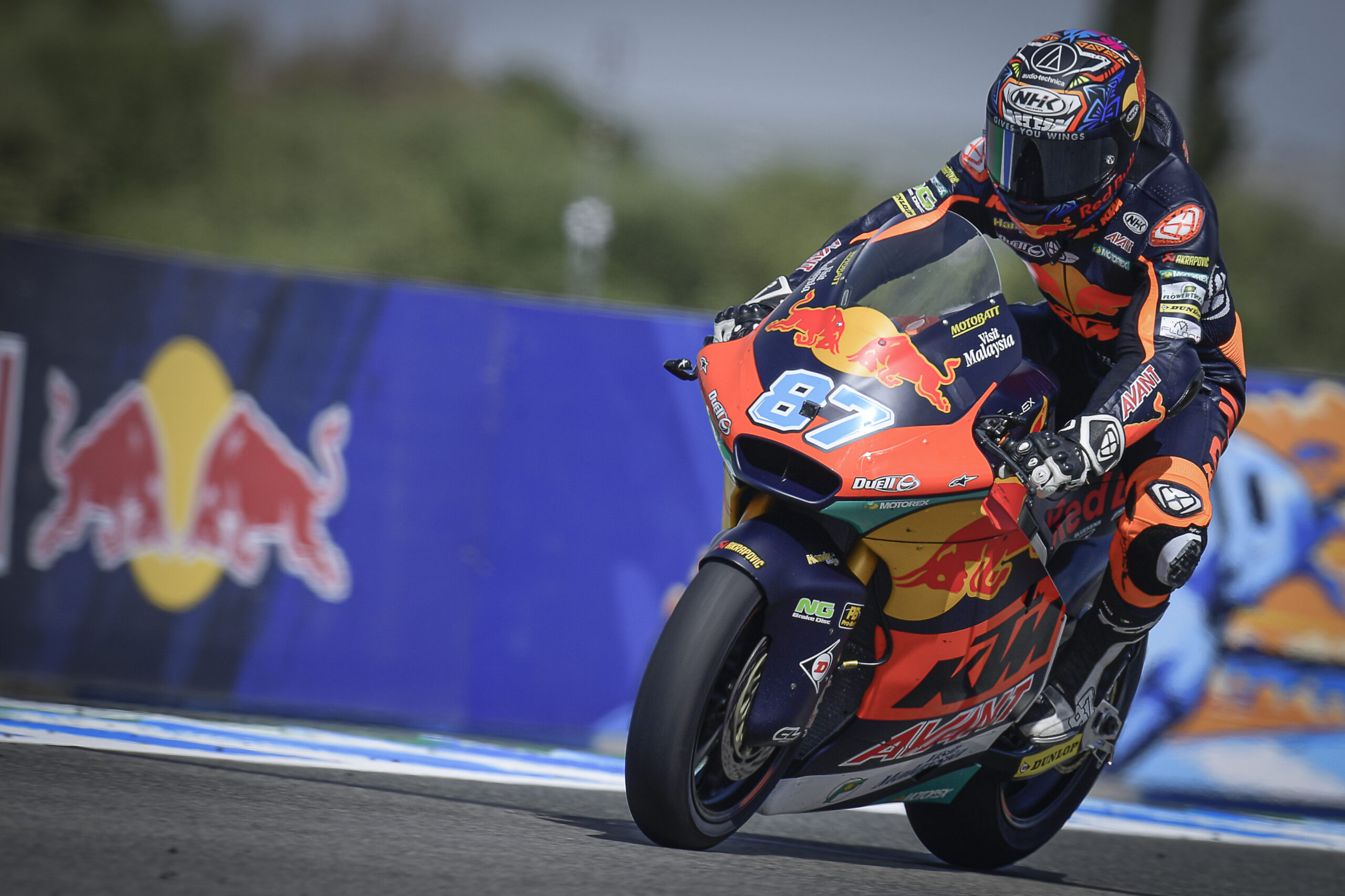 The Championship leader takes pole in Jerez, with the front row split by just 0.086 and Lowes crashing out.

Remy Gardner (Red Bull KTM Ajo) may have only described his pole position lap at the Gran Premio Red Bull de España as “decent”, but the 1:40.667 is actually a new lap record at the Circuito de Jerez-Angel Nieto and secures the Australian his first pole of the season. It was close though, with Fabio Di Giannantonio (Federal Oil Gresini Moto2) just 0.071 off and Marco Bezzecchi (Sky Racing Team VR46) within 0.086 as they complete the front row. Polesitter in the first three races, Sam Lowes (Elf Marc VDS Racing Team) crashed out but will start the fourth showdown of the season from fifth.

So the stage was set for Q2, and the pace was hot from the off as Gardner slammed in a 1:40.667 to lead the way. Di Giannantonio and Bezzecchi got within a tenth, but the Australian held on at the top as the clock ticked down. Some drama then hit for Aron Canet (Inde Aspar Team) as he slid off, although he was able to get back out, before Joe Roberts (Italtrans Racing Team) also hit the deck but was also able to rejoin.

Meanwhile, red sectors started to appear for Lowes. Two tenths under in the third split, the Brit was making a march for the top – but a bobble at the final corner put paid to that. He did improve but stayed fourth, and not long after suffered more drama as he crashed at Turn 2, out the fight. And that was all she wrote, with the front row unchallenged and Raul Fernandez (Red Bull KTM Ajo) then pushing Lowes down a place further to fifth.

That means Championship leader Gardner takes his first pole of the season and becomes the first rider other than Lowes to start from the front this year. ‘Diggia’ takes second, with Bezzecchi back in the mix in a big way on Saturday to take a front row in third and within 0.086 of the top. Raul Fernandez is fourth, ahead of Lowes who is at least in sight of some of his biggest rivals. Xavi Vierge (Petronas Sprinta Racing) completes the second row.

The title and race favourites all near the front, Lowes looking to recover his imperious form from Qatar, and Gardner now the man on a charge as he heads into the race as the points leader. What will Moto2™ bring at Jerez? Find out at 12:20 (GMT +2) on Sunday.

Remy Gardner: “I guess I could say I know this track really well! I’ve done a few laps around here. Everyone’s fast here so it’s always tough in Jerez, but I feel good, the bike was working pretty well from FP1, there wasn’t much to play around with on the bike side. The lap was decent, wasn’t perfect but enough to get me on pole so I’m happy.”