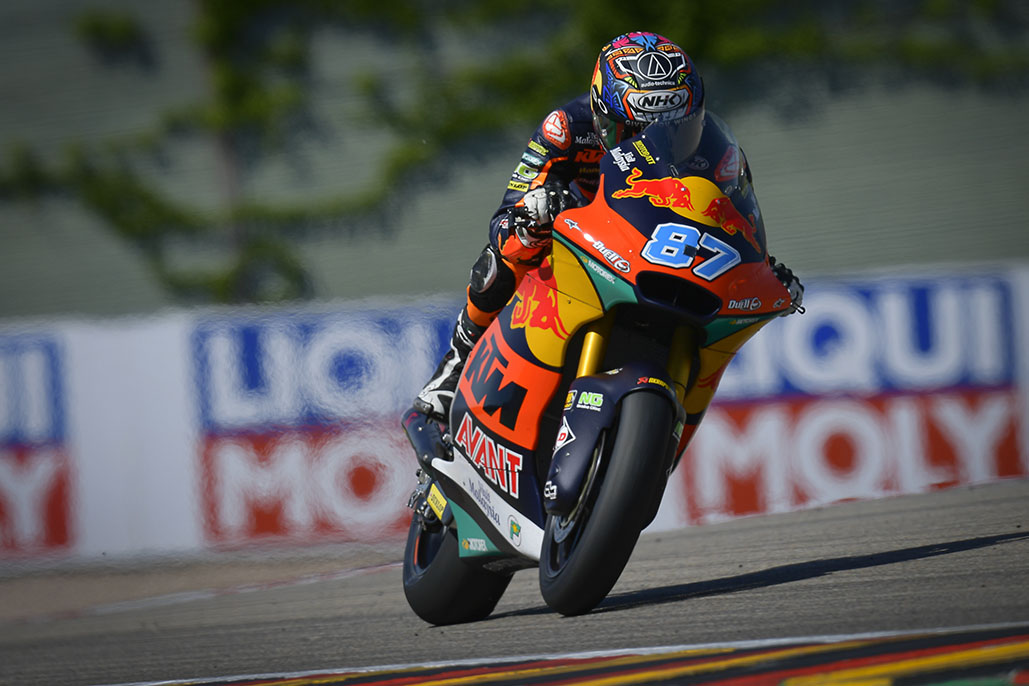 The Championship leader tops both sessions on Friday at the Sachsenring, with a familiar sight on his tail: his teammate

Remy Gardner (Red Bull KTM Ajo) was fastest in FP1 and FP2 on Day 1 of the Liqui Moly Motorrad Grand Prix Deutschland, ending the day an impressive three tenths clear in the combined times. It was once again a Red Bull KTM Ajo 1-2, however, with rookie Raul Fernandez the man on the chase. Fabio Di Giannantonio (Federal Oil Gresini Moto2) completed the top three, pipping Sam Lowes (Elf Marc VDS Racing Team) to it by a single thousandth.

FP1
Gardner started the day as he meant to go on, the Australian fastest from ‘Diggia’ by a tenth as action began at the Sachsenring. Xavi Vierge (Petronas Sprinta Racing) was third quickest, with Raul Fernandez down in fourth by just 0.027. It was a small and apt 0.037 back to the man in fifth too: Augusto Fernandez, with the number 37 0.288 off Gardner.

FP2
The afternoon saw Gardner stretch his advantage and Raul Fernandez take over as his closest challenger, with the Aussie seemingly retaining the upper hand so far in Germany. Diggia was shuffled down to third, that aforementioned single thousandth down on Lowes, with Vierge in fifth – six tenths off the top but just 0.033 ahead of Augusto Fernandez.

As it stands, Marcos Ramirez (American Racing), Albert Arenas (Aspar Team Moto2), Jorge Navarro (+Ego Speed Up) and Marco Bezzecchi (Sky Racing Team VR46) stand to move through to Q2, with Bezzechi – who is third in the standings – having a tougher day at the office in Germany.

That was also true for the likes of of Joe Roberts (Italtrans Racing Team) down in P16.

Bucking the FIM CEV Repsol trend so far in 2021, Alonso Lopez (Flexbox HP 40) pipped Moto2™ ECh teammate Aldeguer on Friday. Lopez ended the day in P21 at the Sachsenring, just 0.006 behind Ogura, with Aldeguer down in P27 at the new venue.