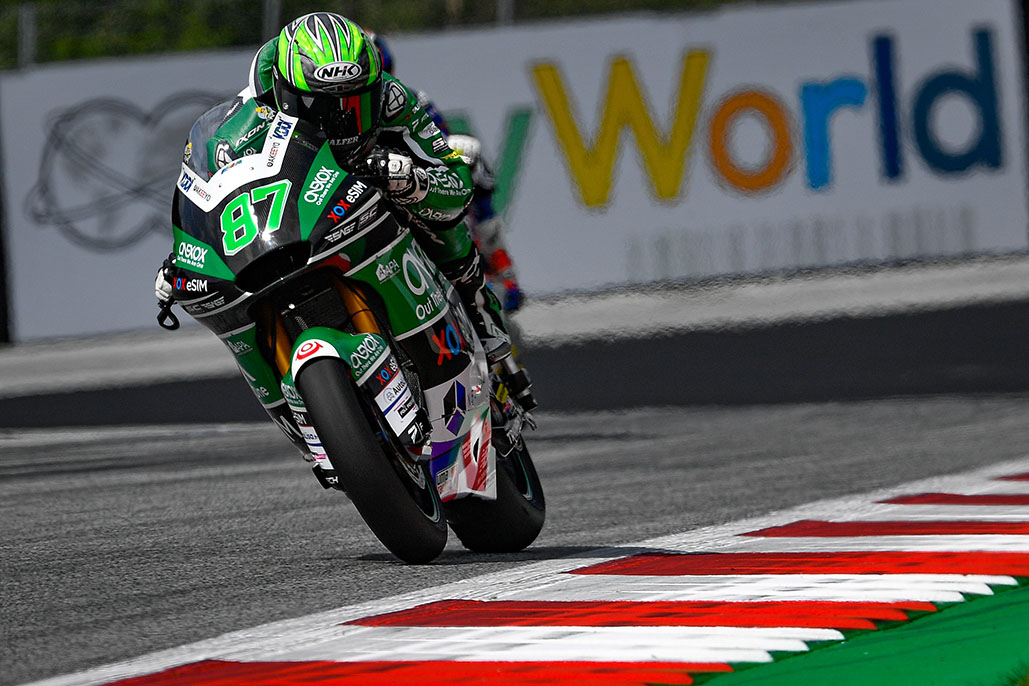 The Australian overhauls Martin to head the grid, with the front row completed by Schrötter.

Remy Gardner (Onexox TKKR SAG Team) secured his second Grand Prix pole position thanks to a 1:28.681 in Moto2™ Q2 at the myWorld Austrian Grand Prix, setting a new lap record in the process. It’s the Australian’s first front row start since his 2019 Assen pole position, and he edged out Jorge Martin (Red Bull KTM Ajo) by just 0.036. Liqui Moly Intact GP’s Marcel Schrötter picks up his first front row since the 2019 German GP in P3, just 0.064 off the top despite coming through Q1.

The number 23 was the fastest in that Q1 session and moved through along with Joe Roberts (Tennor American Racing), Nicolo Bulega (Federal Oil Gresini Moto2) and Lorenzo Baldassarri (Flexbox HP 40) to fight it out for pole, with the rain staying away too and promising a fight to the finish.

The Q2 session was slightly delayed due to technical issues, but once we got the 15-minute pole position scrap underway, it was Championship leader Enea Bastianini (Italtrans Racing Team) on top as the riders came round to complete their first flying laps. Sky Racing Team VR46’s Marco Bezzecchi and Luca Marini soon changed that, before rookie sensation Aron Canet (Inde Aspar Team) took over on provisional pole.

With eight minutes to go Bastianini was back at the top, but Martin then beat Nagashima’s previous lap record by just 0.001 to claim provisional pole position at the team’s home race. Gardner then turned up the wick to snatch it back though, keeping it together to cross the line and take his second ever front row start – both of which have been poles. Ultimately, no one was able to challenge him despite a few red sectors, with 0.036 remaining the gap back to Martin and Schrötter looking back on form with P3, just 0.064 adrift.

Bastianini starts fourth and will be eyeing a hat-trick of wins when the Moto2™ riders attack the Red Bull Ring on Sunday, but the points leader has Canet for close company in P5. Sam Lowes (EG 0,0 Marc VDS) had to settle for P6 after topping almost every session until qualifying, but amazingly, just 0.037 splits Lowes in P6 to Bezzecchi in 10th, with P1 to P10 covered by just 0.250. Jorge Navarro (Beta Tools Speed Up) recovered from a heavy FP3 crash to head up Row 3 in P7, with Marini and Tom Lüthi (Liqui Moly Intact GP) slotting in ahead of 10th place Bezzecchi.

Former points leader Tetsuta Nagashima (Red Bull KTM Ajo) crashed out in the session, and he’ll therefore face a fight back from P18 on the grid.

Who could bet on a winner from that tantalising grid? Martin and Lowes look like they could have the edge on Sunday, but when the lights go out, anything can happen. Will it be wet, will it be dry? Tune in at 12:20 local time (GMT+2) to find out who will take the Moto2™ glory in Austria.

Remy Gardner: “It’s good to be back for the first time since Assen last year, it was a really good lap and I tried to do it on my own, until the fifth or sixth lap i was banging out laps trying to perfect everything. There was one decent one but coming out the last corner I had a big old slide and lost the drive to the line, I think I lost about a tenth, and then I was like alright… time to look for a draft. So I cut off a lap, saw Navarro coming, slotted in behind him and luckily he didn’t shut the gas for the whole lap. I got a pretty good slipstream into Turn 1, 1-2 and 3-4, ultimately that really helped, and out of Turn 7 to Turn 9, I found a bit of speed there with the draft which I think helped the lap. It was a good lap and it feels good to be back!”