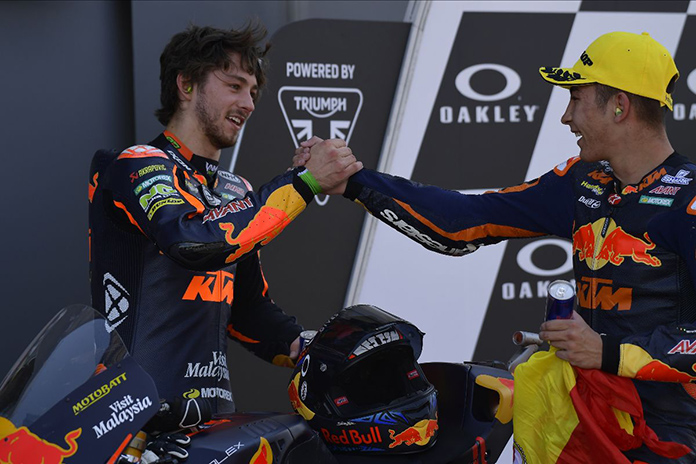 The Australian took his first win of the year in wily style at Mugello. But now we head onto home turf for the rookie… who remains the closest challenger

Remy Gardner (Red Bull KTM Ajo) was already a Grand Prix winner heading into Mugello, but he’d not yet been on the top step in 2021. The Australian has ironed out his form to almost perfection this season, although the cherry missing from the top was that win. Now, after defeating his teammate on the last lap in one of the closest Moto2™ finishes of all time, it’s mission accomplished.

For Gardner, the pressure has certainly eased. With a new KTM MotoGP™ deal already signed and that win ticked off, he can concentrate fully on keeping that consistent record. Will he ease off though? And what about teammate Raul Fernandez? The rookie keeps on impressing and he may have ultimately lost at Mugello, but it was another tour de force. And the Circuit de Barcelona-Catalunya is more of a known quantity, so Fernandez and Gardner will be tough to beat. For the rest, and each other.

Marco Bezzecchi (Sky Racing Team VR46) remains third thanks to his consistency, and the Italian – who has made a habit of such clean last laps that he’s now gained from a couple of high profile late penalties for riders ahead of him – but he’s still looking for that step to bridge the gap to those ahead. For Joe Roberts (Italtrans Racing Team), on the losing side of that penalty, Mugello was the opposite. He may not have stood on the podium but the American took a leap forward that he’ll want to continue in Catalunya, and get some revenge for the rostrum lost. Can he keep that form?

Both Sam Lowes (Elf Marc VDS Racing Team) and Fabio Di Giannantonio (Federal Oil Gresini Moto2) had been two of those often just up the road in 2021, but now consistency is biting a little harder as both suffered a DNF at Mugello. For Lowes, it was from second when chasing for the lead and Diggia a little further back, but both will have a clear focus: finish. Finish well. And pick up some more big points as Roberts homes in…

The rookie battle, behind Raul Fernandez, is also heating up as Tony Arbolino (Liqui Moly Intact GP) continues his storming of the front, and Ai Ogura (Idemitsu Honda Team Asia) remains an impressive performer. Can they keep their roll going and make life harder for the riders who, so far, have just had the edge?

After one of the best Moto2™ duels ever, Barcelona is poised to let battle recommence. The intermediate class go racing at the slightly later time of 14:30 (GMT +2) at the Gran Premi Monster Energy de Catalunya, so make sure to tune in!