After months of online selection, online challenges, the Pro Draft and two Global Series Events held at Misano and Aragon – both double headers – everything comes down to the fabulous setting of the Circuit Ricardo Tormo alongside the MotoGP™ season finale in Valencia. The last stop for the season will play a key role in the conclusion of the 2019 MotoGP™ eSport World Championship with drama, excitement and intrigue guaranteed.

The third and final round of the 2019 Global Series will see the twelve finalists compete in two races – around the fabulous Phillip Island and historic Jerez – that will decide the winner of this year’s championship.

After two rounds of racing, the championship is finely poised and three gamers – AndrewZh (Ducati Team), trastevere73 (Monster Energy Yamaha MotoGP) and Cristianmm17 (Team Suzuki Ecstar) – are separated by just seven points at the head of the championship table as the final round beckons. With double points on offer in each race, there is still everything to play for as the gamers take to their Lenovo Legion™ PCs for the finale.

Qualifying for both races will take place on Thursday 14th November on the eve of the #ValenciaGP before the two races get underway on the evening of Friday 15th. There will be a 90-minute broadcast showing all the events, with the action starting at 18:30 (GMT +1). 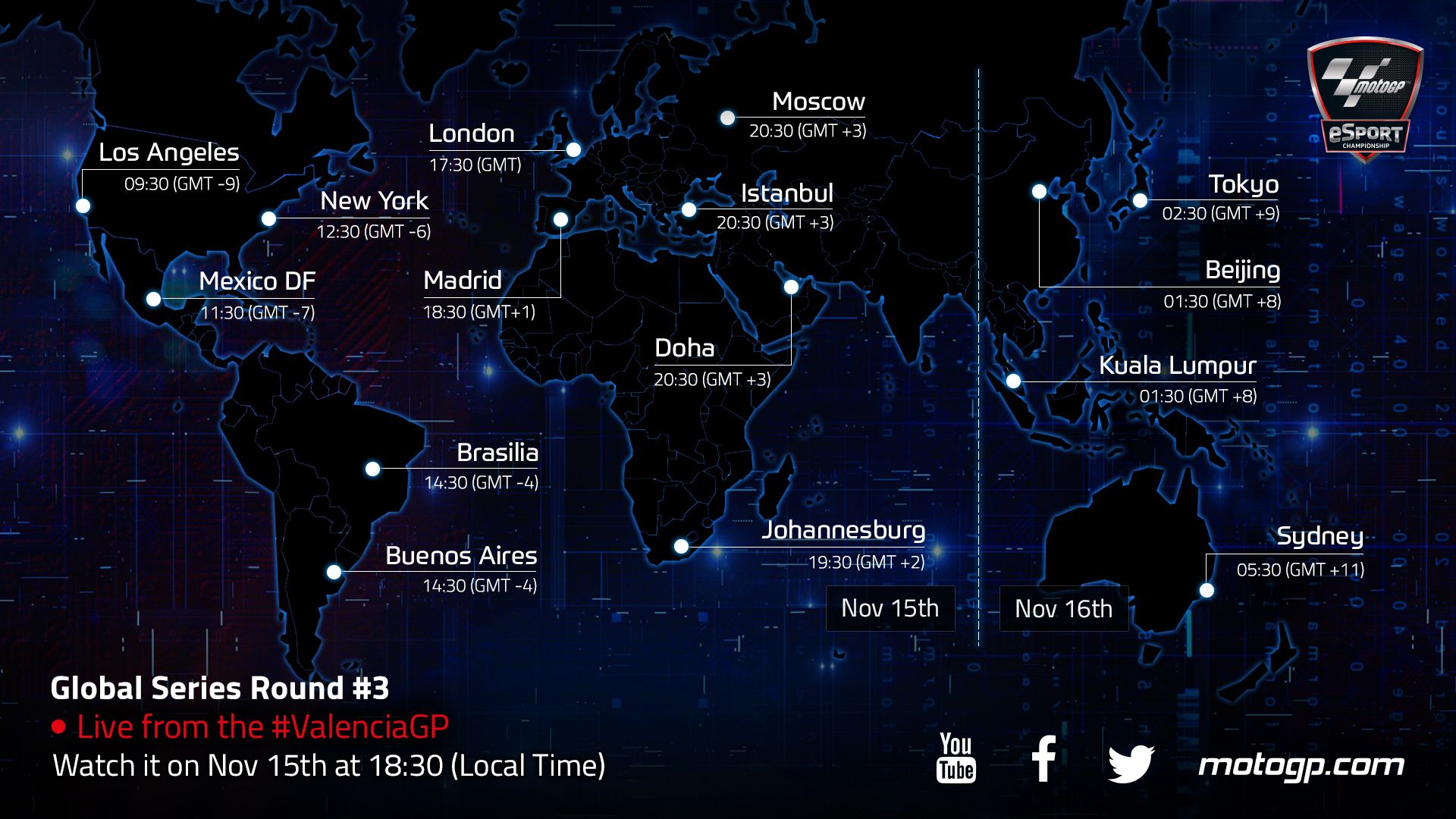 Experienced hosts Gavin Emmett and Amy Dargan will be joined by commentators Matt Dunn and Jack Appleyard once again, with a selection of very special guest appearances from a few MotoGP™ riders too. Pol Espargaro (Red Bull KTM Factory Racing), Danilo Petrucci (Ducati Team) and Jorge Lorenzo (Repsol Honda Team) will all be on hand to offer up advice and observe the action from the commentary box as one of the most tense and exciting MotoGP™ eSport Championship finales yet heats up.

As well as digital coverage, as many as 15 selected TV networks will broadcast the last event of the season – with the finale currently set to be shown by DAZN in Spain, Sky in Italy, BT Sport in the UK, Trans7 in Indonesia, FOX Australia, ESPN across Spanish-speaking Latin America, Sony Sports India, OTE in Greece, MTV3 in Finland, RTBF in Belgium, Viasat across Scandinavia, RTS in Switzerland, SuperSport in South African, and Sportklub in Bosnia, Serbia, Montenegro and Croatia. Red Bull will also broadcast the event on RedBull TV and Twitch.

Wherever you are in the world, don’t miss the finale of the 2019 MotoGP™ eSport Championship!

Heading to Phillip Island as the man to beat, Topr

The fun is guaranteed on the new Ducati Scrambler

The British rookie proved to be the one in control

“I’ll push to the maximum”: fighting talk at the Sachsenring

Cluzel reigns supreme as day one at Portimao closes for WorldSSP

Heading to Phillip Island as the man to beat, Topr

The fun is guaranteed on the new Ducati Scrambler

The British rookie proved to be the one in control