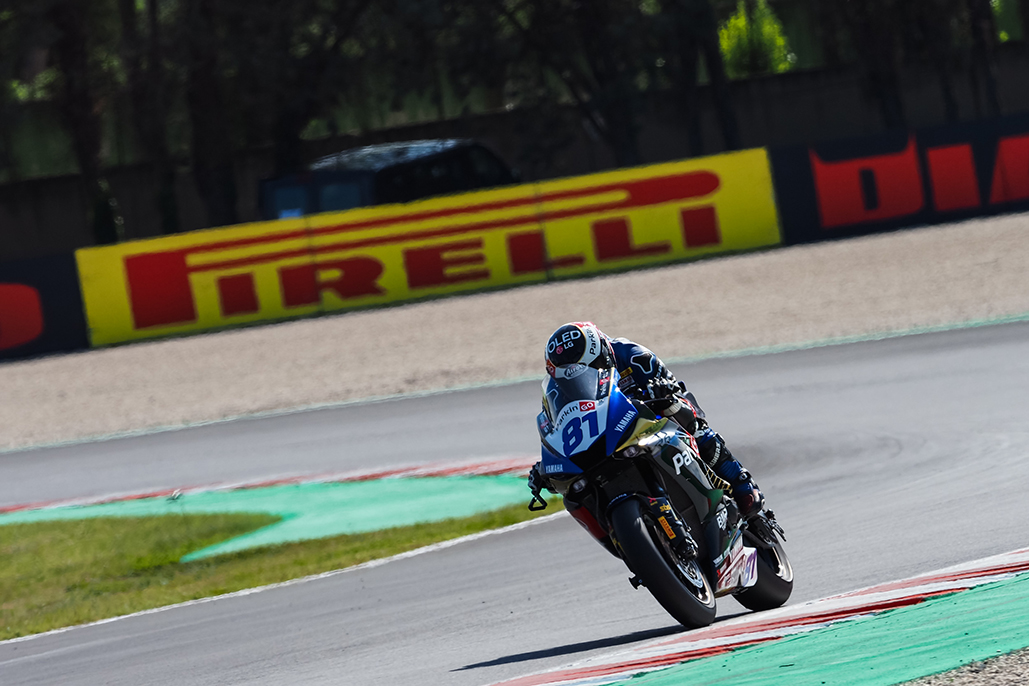 Spanish rider Manuel Gonzalez continued his impressive Misano pace in Free Practice 2 by topping both FP2 and the combined timesheets.

Friday action for the FIM Supersport World Championship came to a conclusion at the Misano World Circuit “Marco Simoncelli” with Manuel Gonzalez (Yamaha ParkinGo Team) continuing where he left off from this morning’s action with the fastest time ahead of the Pirelli Made in Italy Emilia-Romagna Round.

Gonzalez set the pace on Friday morning and improved his time yet again to post a 1’38.473s in the afternoon Free Practice 2 session, topping the timesheets from three-time 2021 race winner Steven Odendaal (Evan Bros. Yamaha WorldSSP Team) as the South African rider looks to get back to winning ways following his retirement from Race 2 at Estoril. Dominique Aegerter (Ten Kate Racing Yamaha), who won last time out at Estoril, finished the day in third place with just over a tenth behind Gonzalez.

Finnish rider Niki Tuuli (MV Agusta Corse Clienti) claimed fourth spot overall for the day despite a crash at Turn 12 in Free Practice 1 that ended his session early, with wildcard Roberto Mercandelli (Team Rosso e Nero) finishing in fifth place after spending most of Free Practice 2 at the top of the timesheets. Federico Caricasulo (GMT94 Yamaha) claimed sixth place for the day despite a crash in the opening session, with the Italian rider able to continue following the office.

He finished less than a tenth clear of teammate Jules Cluzel while it was another rider making their first appearance of 2021, Filippo Fuligni (D34G Racing), who stole some of the headlines after claiming eighth place for the day and second in the morning session; although his copybook was blighted by two crashes in the afternoon, coming at Turn 14 and then Turn 4. Estonian Hannes Soomer (Kallio Racing) was in ninth place for the day with 2019 Champion Randy Krummenacher (EAB Racing Team) in tenth, although the Swiss rider had shown strong pace throughout the afternoon session.

German Philipp Oettl (Kawasaki Puccetti Racing) had a difficult day on Friday at Misano as he suffered from a crash at the left-hander of Turn 2 in FP1 and he could only manage ninth place in FP2, moving him into 11th in the combined standings. Kevin Manfredi (Altogo Racing Team) was the highest placed WorldSSP Challenge competitor in 12th place with Italian Raffaele De Rosa (Orelac Racing VerdNatura) in 13th; De Rosa having a crash at Turn 8 during FP2.

Can Öncü (Kawasaki Puccetti Racing) claimed 14th place across both sessions while Luca Bernardi (CM Racing), who claimed his and San Marino’s first podium last time out in Estoril, was down in 15th and will hope he can move up the order in front of his home fans across the weekend.

Federico Fuligni (VFT Racing) came home in 16th place while One Event rider Luca Ottaviani (RM Racing) was in 17th; the Italian able to re-join the circuit after an FP1 crash at Turn 14. One of the surprises of 2021, Christoffer Bergman (Wojcik Racing Team), found himself down in 18th place with Massimo Roccoli (Promodriver Organization) and Davide Pizzoli (VFT Racing) completing the top 20.

Pawel Szkopek (Yamaha MS Racing) has been declared unfit for the remainder of the weekend following a crash at Turn 9 in Free Practice 1, with the Polish rider being diagnosed with a fracture to his cuboid bone on his right foot. Finnish rider Vertti Takala (Kallio Racing) came off his bike at Turn 4, as did Szkopek’s teammate, Marc Alcoba.