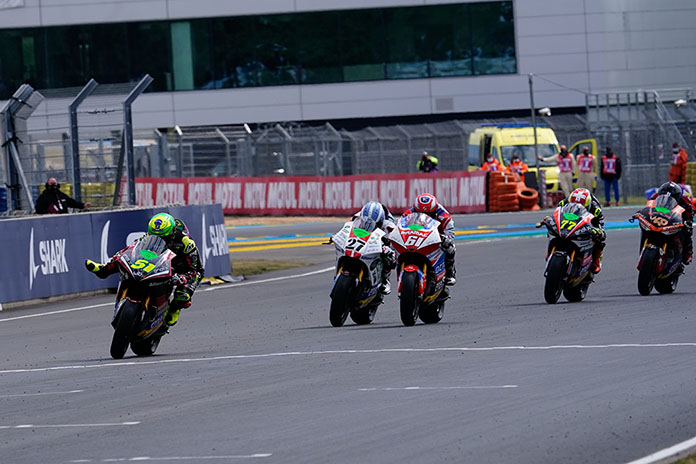 A freight train fight at the front sees the Brazilian seal the deal at the final corner, with even more drama to come after the flag.

The FIM Enel MotoE™ World Cup race at the SHARK Grand Prix de France was an instant classic, with One Energy Racing’s Eric Granado emerging victorious after a last lap and last corner attack on Alessandro Zaccone (Octo Pramac MotoE). Even more drama came after that, with Zaccone crossing the line second but then demoted a place for track limits and classified in third. Mattia Casadei (Ongetta SIC58 Squadra Corse) was promoted to second, the Italian’s stunning ride up from the fifth row of the grid to the podium boosted even more.

There was drama from the off as even before the start of the race, both Miquel Pons (LCR E-Team) – who was scheduled to start from P2 – and Andrea Mantovani (Indonesian E-Racing MotoE) crashed on their out-laps, causing them to miss the race.

Once the lights went out though, polesitter Granado got the best getaway but it was Zaccone who was bravest into Turn 3, the Jerez race winner into the lead. The Italian was out of shape as he squeezed on the power but he held on, with everyone else safely negotiating the tricky Turn 3 and 4 chicane on Lap 1 as well. Zaccone was then wide at Turn 8 though and that allowed Dominique Aegerter (Dynavolt Intact GP) to take over at the front. Granado was shoved down to P6 on the opening lap, the Brazilian taking it steady early on.

Then, seemingly out of nowhere, Hikari Okubo (Avant Ajo MotoE) was into P2 from 10th on the grid, and the Japanese rookie was into the lead at Turn 7. It was a sensational start to the race but drama was about to unfold at Turn 3 on the third lap between two rookies: Okubo and Fermin Aldeguer (Openbank Aspar Team). Coming into the chicane hot, Aldeguer was up the inside and both he and Okubo went down, riders ok.

Zaccone was then back in the lead at Turn 11 on Lap 3, as a MotoE™ freight train battled it out in spectacular fashion at Le Mans. The top eight were locked together but Granado was picking his way back through the pack, up to P3 and then swiftly P2 on the penultimate lap, passing Aegerter at Turn 13 – a move we’d see again a couple of minutes later…

Zaccone was the race leader on the last lap but went slightly deep into Turn 3, and that cost him a good exit heading down the hill into Turn 6. Granado pounced. In doing so though, he went wide and left a gap, which Zaccone gobbled up to gain the lead once more. Aegerter nearly tagged the back of Granado at Turn 7 as he and Lukas Tulovic (Tech3 E-Racing) were forced slightly wide, and that allowed Casadei to move into P3.

A move for the race lead didn’t come until Turn 13. Just as he did a lap earlier, Granado sliced his way up the inside, and this time Zaccone was the victim for the lead. The Italian snapped straight back though and shoved it up the inside at the final corner, but he was wide and Granado slipped back through. That was that and the Brazilian takes a stunning first win of the year after battling through in style. Zaccone crossed the line second, ahead of Casadei, but then the timing screens changed: the number 61 had a one position penalty and would take 16 points. Track limits, for which he’d already had a warning, bit late.

Zaccone is nevertheless still the points leader and now has an eight-point advantage, with Casadei level on points with fourth place finisher Aegerter now after his P2. Granado’s win beings him right back into the title frame having crashed in Jerez.

Reigning World Cup winner Jordi Torres (Pons Racing 40) and sixth place Yonny Hernandez (Octo Pramac MotoE) finished less than a second away from the win, and Tulovic crossed the line in seventh after having held P3 in the latter stages but getting sent wide. Matteo Ferrari (Indonesian E-Racing Gresini MotoE) made a mistake at Turn 10 on the penultimate lap that cost him a chance at fighting for a first rostrum of the year, the 2019 World Cup winner finished P8.

So that’s that, arguably the best MotoE™ race there has been so far as 2021 continues in dazzling style. The next time we’ll see the MotoE™ riders heading into battle is at the Catalan GP at the start of June, so it’s not long to wait!

Eric Granado: “I’m very happy! I made a mistake in Jerez and I really wanted redemption here. The weekend was good for me in dry and wet, yesterday I had a nasty crash. Today I was trying to take it easy. In the first laps I had some movements on the rear, I was really calm after that and trying to do clear overtakes and be consistent. Finally, it was good, I had a little more possibility than the others in the braking and I could overtake. I am very happy, this result is really special for me, after so many races with problems so yes very happy. I want to say thank you to my team, for trusting me in my job.”